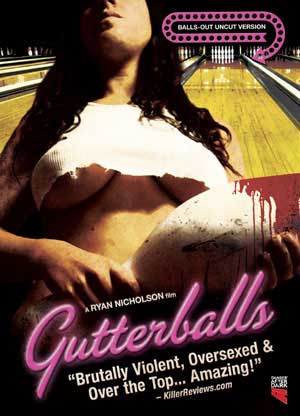 After two adversarial groups of teenagers clash at a bowling alley during its midnight disco party, one of the girls is violently raped. The next night, all the kids return for a revenge session but are surprised to encounter a homicidal stranger. Wearing a bowling bag on his head to disguise his identity, the killer begins picking off the teens one at a time, making sure each experiences a grisly death in this gory slasher flick.

Directed by Ryan Nicholson, Gutterballs is one balls-out mother of a movie! And when I say balls out, I mean it literally. I thought I was going to have to hit the bucket if I saw one more dude-pud being whipped out on screen. But none-the less this film is a combo of sorts, high energy brutal kills combined with lots of sex and violence. The film centers around a bowling alley where a group of guys heckle back and forth with the opposing team. Now this group of assholes are the real deal, 100% asshole to the point I would of bitch-slapped them with a bat and enjoyed it. The locals seem to enjoy this back and forth banter of obnoxiousness and so it continues on this way through-out the film. 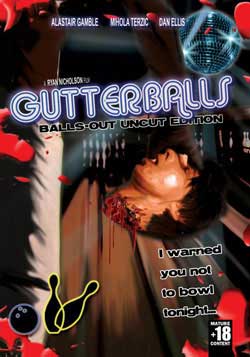 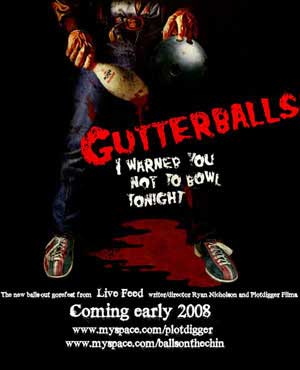 A fight breaks out, noses get busted and the master asshole gets his foot broken. Not too shabby, except the boys retaliate that night against the female who broke it by some down-home brutal raping. The rape scene is not unlike the Jodie Foster scene from “The Accused”, it’s hard to watch and harder to stomach as they finish her off with a bowling pin. Now if you haven’t guessed it, already this is NO film for kids or any self respecting viewer, but some viewers may find this experience something to behold and so in favor of cinematics there is some crazy sh*t to swallow. Some of the scenes which go from one sexing to another pretty much cross over into p*rn, though with the lights dim, you only catch glimpses, but enough to get the idea. In some ways its absurd, the way these fine upstanding jerk-offs verbally abuse each other like a ping pong match. However our mystery killer shows up to knock off the youngens with visceral style, grace and welcoming arms. 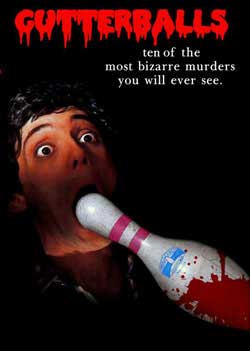 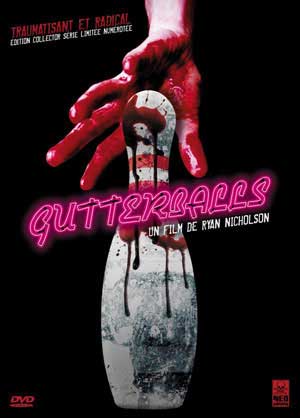 Now I’ll warn you, even though the kills will thrill gore horror fans, Some of them are too much to stomach. You’ll know what I’m talking about when you see this. I suppose that statement probably sold a few more copies but I call em like I see em. I’d love to see the script on this one, as every other word is “%$%*@in-%$%*@”. Most of the actors are first timers, but they all execute there roles perfectly in a %$%*@-up way. Though with first time actors you always have to give the hats off to the director for making the right calls. Now if its sounding like I didnt dig this film, your mistaken, though you should know what your getting into before-hand. 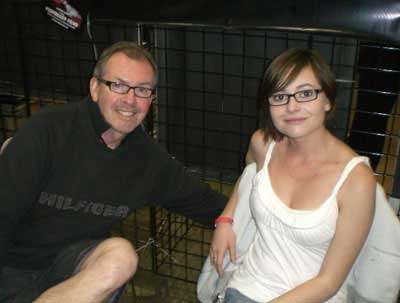 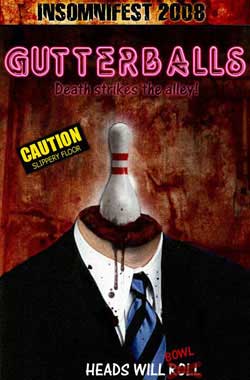 The music is a soundtrack of olds 80’s tunes and disco beats, which automatically dates its presentation although it’s a 2008 film. But that simple fact adds charm to the whole deal as well. I was surprised to hear songs like “Raise a little Hell” and some Chilliwack hits, which suggests the Canadian influence of music choices.

Gutterballs thrives on shock value, however the film is really well made. Its framing, its execution and its looks are professionally done with sick-ass FX to add to the thrills. The ball waxing scene (Bowling balls perverts….) is to be applauded and awarded for its nastiness. Upon watching the film its look and feel had a very “Friday the 13th” type of thing going on. Even the edits reminded me of its dark contrasted film style and camera angles. For all its sickness I have to say I loved it! Plot Digger Films “Gutterballs” is one badass freak-ass film, Viewers beware – you’ll love it and lose it all in one! Also I’m guessing you should go with the unrated version to get the full experience or you won’t know what I’m talking about.