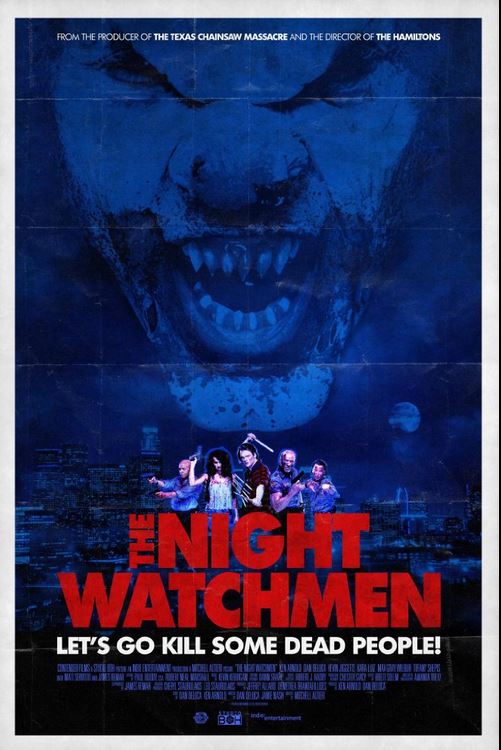 Three inept night watchmen, aided by a young rookie and a fearless tabloid journalist, fight an epic battle for their lives against a horde of hungry vampires.

Let me state the obvious: watching a fun movie can be a blast! The Night Watchmen is a fun movie! Even in ‘big’ movies, horror comedy can be hard to do right. The writing here is tight and moves things along at a nice little pace; just the right music, dropped in at just the right places…the technical delivery here is near flawless!

When all the so called little touches are done right, they can take a good movie up into the great arena! Each character here has a clear purpose, and by-and-large, only manages to behave stupidly on the rarest of occasions. They each have their own idiosyncrasies of course, and the poor new guy has to pay his dues in both some light-hearted and serious ways. Each actor seems to put a great deal of heart and soul into the numerous action sequences.

The film, set in Baltimore, Maryland (US) opens with a quick montage showing a ‘beloved’ clown named Blimpo (a fictitious Baltimore celebrity) and his ‘comedy troupe’ who’ve all died under mysterious circumstances while touring in Romania. Of course, one can never be too careful in Romania (or so I’ve heard). Well, Blimpo’s remains make their way back to the U.S., only to end up (under comedic circumstances) in the downstairs warehouse of a non-descript company (think Dunder Mifflin-esque). Well Mr. Clown decides he isn’t really dead and (of course) needs a snack (as most zombie-vampires are wont to do!) and of course this sets the shenanigans afoot. To properly pull off most of the comedic shtick in a proper tone, most of the film’s focus gets placed on the crew of bumbling night watchmen.

The spread of the vampire outbreak starts slowly, of course but quickly picks up steam after the first few kills. Once the office pervert, played by the highly capable James Remar, is bitten, things really start popping off! Remembering that these people are working at night, in a high rise building, mostly filled with hungry vampires, there is no shortage of running, fighting and saving one another. Somehow, amidst it all, Blimpo escapes and attacks a random guy walking his dog, but oddly lingers around the building for who-knows-why. Of course, you can’t have a movie featuring night watchmen where the guys aren’t playing poker, so there is a brief funny bit where the seasoned guys, secretly using a camera, pull the new guy into a game, without him knowing his cards are being monitored.

Loads of funny little elements like that serve as a proper glue in this film. Of course, as their poker game wraps up, a super annoying employee wanders in to complain about a malfunctioning bathroom and to state that someone has been stealing food from his desk……this turns out to be the genesis of a long running joke in the film. The film features excellent pacing moments like this, which allow viewers to slow down and catch their collective breath. Also, not too common in horror comedies, most of the scary parts turn out to actually be scary! The capable Kara Luiz plays Karen in this one, a tabloid journalist who manages to get vicious when circumstances require it.

Sadly, as of this writing, this film has not yet achieved distribution in the U.S. And that’s a major shame! Already in 2017, it’s cleaned up pretty well awards-wise on the film festival circuit, so that should tell you something. Mitchell Altieri directed this one and all the news one can find online indicates this should be on the cusp of being picked up for wide range distribution.

I promise: this one has ALL the makings of a potential cult classic. In the what-to-watch-when-you-and-your-friends-are-pretty-drunk category……this one is Citizen Kane material….take my word for it!

The only thing stopping me from gjving this one 10 full stakes is that the climax is a teensy bit on the weak side. Laying that aside, this is the best horror comedy I’ve seen this year!