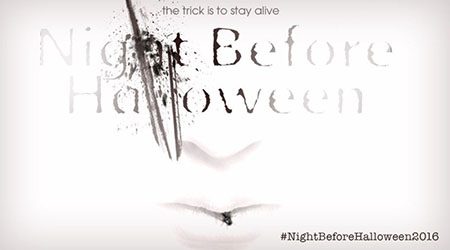 Pranksters find themselves being hunted down and killed by a creature they’ve inadvertently unleashed on the world after their Halloween stunt goes bad.

The Night Before Halloween is a movie from Syfy Channel.  Writer/Director Sheldon Wilson has done several movies for Syfy.  If you’re not familiar with Syfy Channel movies,  it’s kind of hit or miss when it comes to movies.

On the night before Halloween,  Megan (Bailee Madison) and her friends, Adam (Justin Kelly), Kyle (Jahmil French), Lindsay (Kiana Madeira), Wyatt (Alex Harrouch), and Beth (Natalie Ganzhorn), all find themselves in a scary situation. It turns out to be a prank that causes Beth to be electrocuted and end up in a coma. Her friends didn’t know it was a prank, with the exception of Kyle, who is hiding a secret from the others and was trying to make sure that the prank left someone dead. 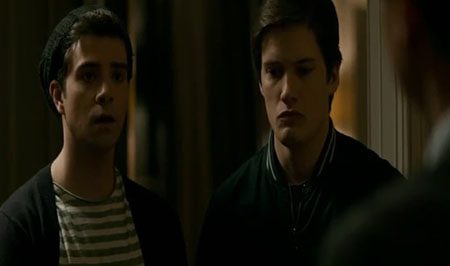 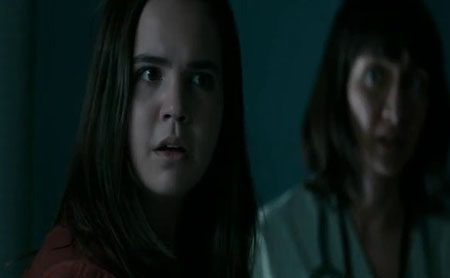 Kyle is the new kid in town, and unbeknownst to the others, he was trying to escape a curse that requires him to trick someone into killing someone else before midnight on the night before Halloween. Since no one was killed, Kyle must face the curse himself. The unseen force that is after Kyle, starts out as a swarm of flies, and then morphs into a shape, or fly monster, as I’m going to refer to it.  Kyle manages to make a video warning his friends about the curse right before he is mutilated by the fly monster. Sounds simple enough, but this movie is unnecessarily hard to follow and extremely confusing at times.

Megan and her friends are questioned by the police, but hide the fact that Kyle admitted to them that it was a prank gone wrong and that Adam was in on the prank, and they tell the police it was an accident.  In fact Adam filmed the entire prank on his phone, but realizes that he has lost his phone. Detective Burke (Anthony Lemke) is assigned to the case, and doesn’t believe the friends’ story that it was an accident, but can’t prove it. 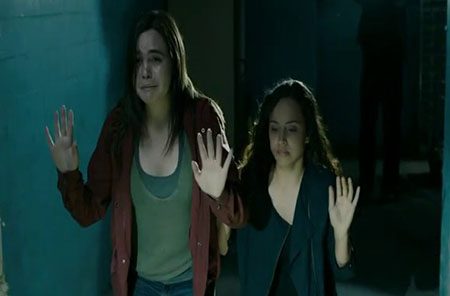 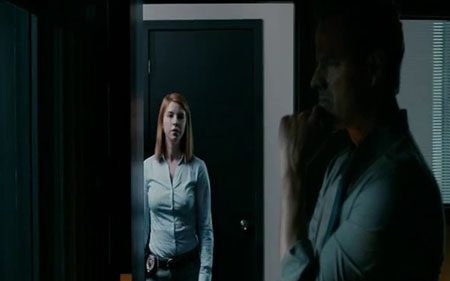 When they arrive at the location where they were supposed to meet Wyatt, they discover the police are there and that they have found Kyle’s body. Apparently Detective Burke received an anonymous phone call telling him where to find Kyle. He questions the group of friends about Kyle’s death.  When they return to the car to leave, Wyatt is hiding in the backseat with a gun and tells them to drive.

Wyatt holds the group at gunpoint and tells them that he found Kyle’s phone and shows them the video that Kyle made right before he was killed. Kyle explains the curse and they realize they each have to trick someone into killing someone else, before midnight on the night before Halloween. If Adam helped Kyle with the prank, why wasn’t the curse only passed on to him, instead of all of them? Literally none of this makes any sense.

As Adam is trying to wrestle the gun away from Wyatt, everyone gets a text from Beth at the same time that says she knows their secret and has Adam’s missing phone, which contains the video of the night Adam and Kyle played the prank that left Beth in a coma. The text also says, “One hour until the fun begins.” In an hour, it will be midnight and also October 30th. They all decide to go back to the hospital to try and get Adam’s phone.  This movie started off with potential, but quickly descended into a frustratingly confusing mess. 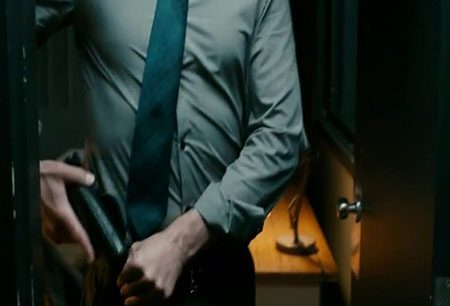 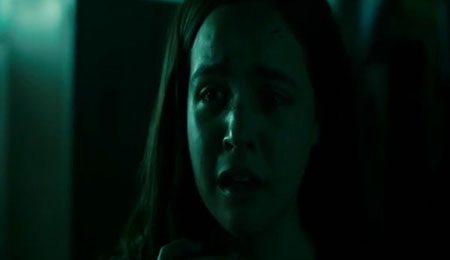 Wyatt and Megan sneak into Beth’s hospital room to look for Adam’s phone. I couldn’t figure out how no one working in the hospital noticed all the flies swarming around. As the clock strikes midnight, they are attacked by the fly monster and Beth flat lines. While trying to get away, Wyatt falls out of the window to his death. Megan, Adam and Lindsay try to flee the hospital, but the police force them into hiding inside the hospital.

Detective Burke is joined by Detective Reese (Dani Kind) to investigate Wyatt’s death at the hospital. While hiding in the basement, Megan, Adam and Lindsay are discovered by police and try to run, only to realize the fly monster is also after them. Adam closes himself in a room with the fly monster and tells Megan and Lindsay to run.

The police apprehend the girls, while a scream is heard coming from the room Adam was in. When the police put Lindsay in a police car alone, she starts screaming for them not to leave her in there alone.  The detectives search Megan and find that she has 2 cell phones.  She tells them that there is a video on Kyle’s phone that will explain everything, but Detective Burke tells her he found Adam’s missing phone on Kyle’s body and they have seen the video of the night of the prank.

Megan escapes and the police take Lindsay to the police station and leave her in an interrogation room alone and she is killed by the fly monster.  When the detectives discover Lindsay’s body, they look at the security camera footage and see the flies and realize that maybe the story about the curse is true.

Megan finds Adam, who is somehow still alive, but injured.  They come up with a plan to try and kill the fly monster with fire and hopefully break the curse.  They go to an abandoned building with a bunch of gasoline, to attempt to lure the fly monster to come after them.  The detectives figure out what’s going on and rush to the building. From here, the story got even more confusing and hard to follow, but basically, there was a battle between Adam, Megan, the detectives and the fly monster. This movie had potential to be a lower budget version of “The Ring” or something similar, but it failed miserably because of giant holes in the storyline that were impossible to ignore, and just general mass confusion.