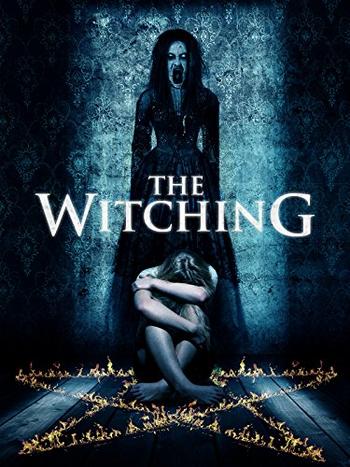 Several friends and makers of a paranormal podcast called ‘the Witching Hour,’ go to the location of a supposed witch burning on Halloween night. As they sit around a campfire waiting for the titular witching hour they tell one another spooky stories.

Going into this blindly like I do for most reviews, I had no idea this was an anthology. It plays like a lost episode of ‘Are You Afraid of the Dark.’ Young people around a campfire telling each other stories that only a children’s demographic might find scary. Except this is not a meeting of the Midnight Society, these are 6 cringe inducing generic bad actors.

Each of the six short films contained within have totally separate directors, writers, and stars. Yet, they feel incredibly similar in their tone and lack of originality. Certain lines and moments feel lifted directly from other works. There’s brashness in how little effort has been placed in making any part of this feel tense or gripping. No wasted space in dialogue or plot twist. Every line sets up exposition and set-up, once the set-up pays off immediately cutting back to the campfire, with little or no resolution. This accounts for the swift hour and 20 minute runtime.

Those campfire scenes are the strangest and least interesting of anything. The palpable awkwardness immediately screams not just terrible direction but a sense of existential dread. Not an existential dread for the characters. As a grown man viewing this, I felt this was proof that my life was without purpose.

Since none of the shorts bare any resemblance to something interesting, I’ll briefly explain each.

1. A woman whose son has died, is being haunted. Her husband doesn’t believe her. They’re not even being haunted by their dead son. This is kind of rude, I thought. Whoever is haunting them seems to have an affinity for a toy truck. That’s it.

2. Young woman moves to farmhouse, is haunted by a ‘sleepwalker.’ The ‘sleepwalker’ is a generic demon thingy that sprinkles black sand in your face while you try to sleep. This is another entry into the horror genre, ‘women who live alone are going to die.’

3. Radio DJ, accepts a call from God, the Devil and his dead grandma. They don’t have much to say, so it’s realistic talk radio. That’s the extent of it.

4. A housewife finds an hourglass in the attic which freezes time. This allows her to work on becoming a 1950’s stereotype. Unfortunately, if you stop time for more than an hour, you lose 100,000 hours. The math works out to this being roughly 11 years. Turning her husband into a skeleton and the children into creepy old people. Definitely the least thought out, which is saying something.

5. An overnight security guard at a parking garage sees a woman overdosing in her car. He tries to call for help but as he does, the woman jumps over the side of the building and disappears. The next day he finds out the man who gave him the job has been dead for years and the woman is a ghost. I audibly guffawed at how lame this was.

6. On a lonely stretch of highway a woman is driving to her sister’s house. A man starts beeping until she pulls over. Since this is poorly written she does pull over and roles down her window for a total stranger in the middle of the night. He tells her she has a wobbly tire and that he’s also going to her sister’s house. She lets him tighten it and they go on their separate ways until, oh no, the tire falls off. He said he was tightening it however could this be? He pulls up again and says he’ll take her the rest of the way. At this point you can see that the handsome stranger has a vanity license plate of “Chill6.” If that’s not setting off the warning sign in your brain, the gene pool is better off without you.

The wraparound campfire story ends with as little tension and flare as any of the segments. It’s a sad attempt at a cash grab with no talent anywhere to be seen. There are hundreds, if not thousands of movies I’d recommend watching before this one. Old Super 8 footage of a man cutting grass found at a yard sale in Milwaukee would have more cultural significance then this movie.