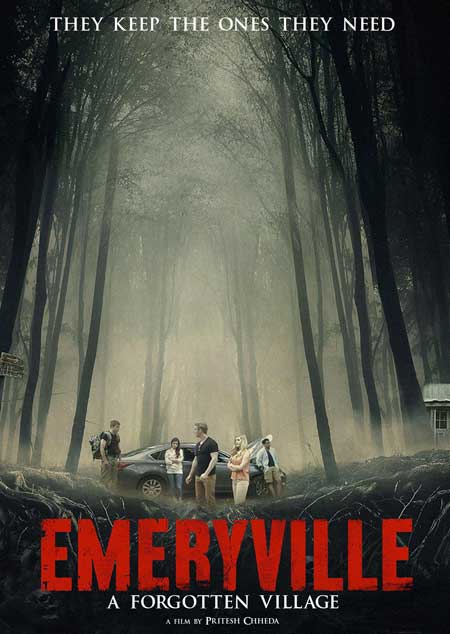 During a road trip that leads them into a wooded area, four friend near hit a stranger before wrecking their car on a tree. The foursome and the stranger decide to seek help from a nearby village. A village that proves to be dangerous.

I’m not one for films that are “so bad they’re good”. If I like a film that is often marked as bad, it’s usually because there is some redemptive trait woven into the work that makes it watchable for me. For example, The Killer Shrews is often brought up as an example of bad cinema. But, I feel that it’s so well directed that I can look past any shortcomings it may have. I understand that it’s a ridiculous premise and it may be amusing to see dogs dressed up as the title characters. But, I still find it to be a tightly presented creature feature. It scared the hell out of me as a child and, as an adult, I find it tense and thrilling. There’s no hope for Robot Monster though.

A previous website I reviewed movies for sent me a film that turned out to be the worst film I had ever seen, Knockdown. And, it still holds the title. That film was truly a chore to sit through. But, on a technical level, The Emeryville Experiment is much worst.

You know how in many bad films (a well as some good ones) there may be a moment of awkwardness due to poorly set up scenes? Well, all of The Emeryville Experiments seems a feature-length extension of that type of awkwardness. This mood actually starts off after a series of quick cuts with the line that sound something like , “They’re changing into animals and they want me to become one of them” begins the movie. The shots go by so fast that it’s impossible to tell what’s happening. After this, the film starts with four friends driving in a wooded area. The driver’s girlfriend, Christine, (Tess Cline) is navigating the trip on her GPS. (The fact that GPS is working in such in kind of area in a horror film was the first indication that there was something wrong with this film). The driver, Justin (Nardeep Khurmi), annoyed and, frankly, treating his girlfriend like crap, decides to use a map while driving since he’s convinced they are lost. Of course, we all know texting and driving is a bad idea. But, so is reading a map and driving especially when you hit someone standing along side of the road and then run into a tree.

This incident is so badly shot and cut together that I’m not at all sure if the person is hit by the car or just swiped by it. He does get up seemingly unscathed. Also, I was surprised when it’s revealed that the car ran into a tree. This was poorly executed, indeed. Then the victim, Ethan (Mark Reininga), joins the foursome as if nothing had happen and their meeting was all planned.

Finding a conveniently placed sign near the wrecked car directing them to Emeryville After a toss of a coin, they decide to go there to seek help. Once there, they find creepy looking citizens in an old town that looks like something out of a Western. A place where men carry off injured women off over one shoulder and paranoid barber (David Sturgeon) who thinks it’s still the 1950s. A barber that pulled out his own finger nails.

In time, like many films with an isolated community like The Wicker Man, Children of the Corn, or The Dark Secret of Harvest Home this town also has, well, a dark secret. And, this is where the “experiments”  come in.

There’s a very amateurish quality to this film that can’t be denied: the lack of proper mise-en-scene, odd music cues that come and go in a comical manner, and the acting. The look of the film suggests it was shot on an older model consumer mini-dv camera. The poor image quality I didn’t mind so much. The rest, on the other hand, made for a particular viewing experience. In fact, the movie is so strange that I found myself highly amused and having a great time with it.

By the 20 minute mark I started to think and hope that the surrealist quality was all intentional. That writer/director, Pritesh Chheda (For Sale By Owner) was influenced by David Lynch and this is what he was going for all along, a Lynchian-style movie. The main difference between the two filmmakers is that Lynch, early in his career, showed evidence of being a cinematic virtuoso that could make his experimental or “straight” films with ease. Chheda does not. Even so, I wouldn’t mind checking out another one of his films.