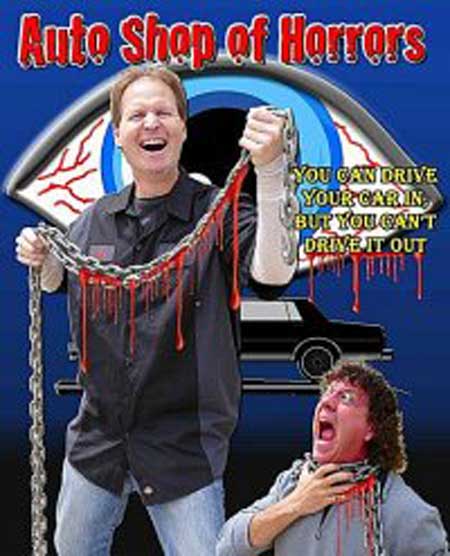 A mentally disturbed car mechanic becomes convinced that if he eats enough human eyeballs he’ll develop the ability to see into the future, so when customers bring their cars into his repair shop, he eats their eyeballs.

Early on, it appears that Auto Shop of Horrors will be just another on-the-cheap, derivative, sophomoric waste of 77 minutes of life (87 minutes if you include the music video at the end!).

But then, just when you least expect it, the movie comes alive with intelligence, wit, originality, and energy, and suddenly you realize that there is more here than meets the eye…and you can’t wait to see what’s going to happen next. 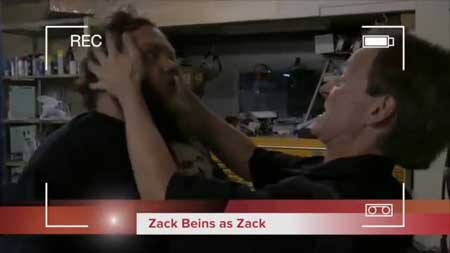 There’s something not quite right about Randy, the proprietor of a small auto repair shop in the middle of Anytown, USA. Polite to a fault, disgustingly solicitous, and bristling with sexual charisma and animal magnetism (or we are told over and over in what appears to be the filmmakers’ attempt at humorous irony), Randy’s perfect façade hides something sinister underneath it. You see, Randy is also a voracious reader, and we learn quickly that a recent dive into the literature of the ancient Aztec people has convinced Randy that eating human eyeballs will give him the power to see into the future. And so Randy lures unsuspecting customers, friends, and other randoms into his lair, tortures them, and kills them.

And that’s basically it. For an hour and a half. 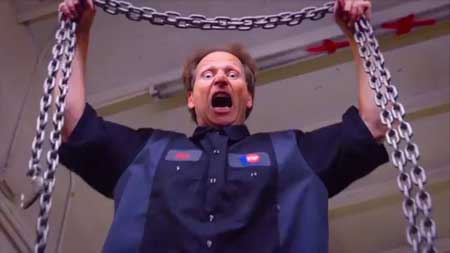 At this point, you may be wondering how on earth a story with such a threadbare plot and so little going on could possibly fill an almost full-length feature film? Great question. The answer, dear reader, is repetition: mind-numbing, soul-deadening, sphincter-tightening repetition.

For instance, the reason we know about the ancient wisdom of the Aztecs is that Randy repeats it over and over and over again, in the exact same way, to every one of his victims. And after Randy claims a victim, he disposes of the body by sending it over a cliff in the owner’s car, using the exact same stock footage shot every time. In fact, when all is said and done, Auto Shop of Horrors is basically a single sequence of events—a customer shows up at Randy’s shop, Randy tells them about the Aztecs, Randy tortures and kills them and eats their eyes, and Randy disposes of the body—repeated ad nauseam. And in this case, “ad nauseam” should be read literally. There is nothing clever, interesting, or motivated in the way that the film just keeps repeating itself: it is ultimately just apathetic, unimaginative laziness…not to mention clear disrespect for the audience. 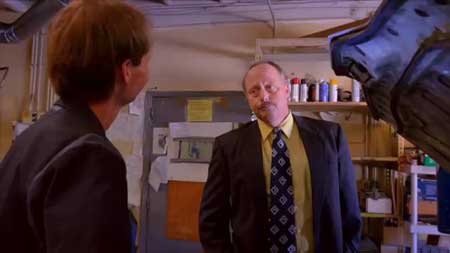 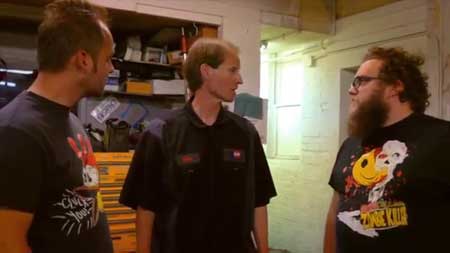 Made for a pittance of a budget—just $2,000 according to the filmmakers’ claim—Auto Shop of Horrors actually makes you wonder where all that money could possibly have gone. It certainly is nowhere to be found on screen, and even by the standards of low budget horror, its sins are plenty.

One head-scratchers comes in the opening moments when Randy gouges out his first victim’s eyeballs, and it apparently hurts so little that the dying girl only whimpers quietly throughout the assault. And then there’s the scene in which Randy beats his friend with a wrench, and the result of the assault—which includes a vicious blow to the head—is just a slight trickle of blood. In fact, only about half of the victims show much outward emotion at all over their mortal plight, but it’s hard to blame them: in the end, they care about what’s happening to them almost as little as the audience does. 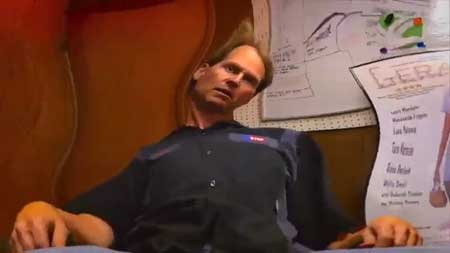 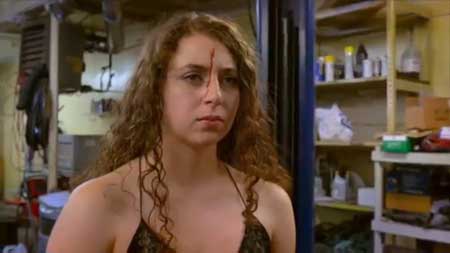 The only thing that this film has going for it is writer/director/producer/star Glenn Berggoetz (he shares writing, directing, and producing credits with Tim Gallagher), who seems to have forged Auto Shop of Horror out of sheer will. Berggoetz is somewhat of a schlock film auteur, with more than a dozen feature film credits over the past seven years. According to his bio, he is known for Midget Zombie Takeover (2013), The Worst Movie Ever! (2011), and To Die Is Hard (2010), but in this case “known for” might just be a subjective phrase.

Berggoetz, however, brings a sort of eccentric enthusiasm to his performance. He plays up the camp and chews on the play-it-as-it-lays scenery, and his affect suggests a more maniacal and not-so-gently-used Craig Kilbourn of days gone by. Nothing could have reasonably saved Auto Shop of Horrors from being an interminable bore, but without Berggoetz’s presence, it would be thoroughly unwatchable. Well, maybe it is, anyway. 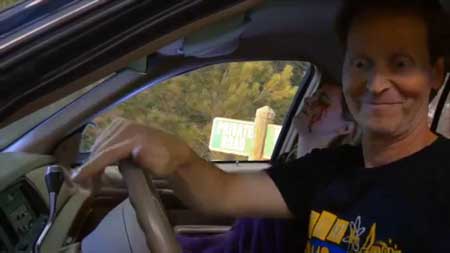 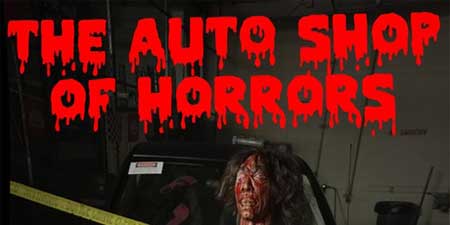 That said, despite the low quality of the production and the rotten narrative, Berggoetz and Gallagher (who also did the cinematography and co-edited the project) occasionally do some interesting things with the camera framing and editing, though that assessment would be the textbook definition of grading on a curve. And the occasional nods to movie classics littered throughout the film—including Reservoir Dogs and The Texas Chainsaw Massacre, just to name a couple—adds a bit of fun to the whole thing.

However, none of it is enough to salvage Auto Shop of Horrors, which itself is so uninterested in its own fetid story that it simply ends, abruptly and without resolution, when it reaches a point that could reasonably considered feature-length. Under other circumstances, a view might feel cheated by the perfunctory conclusion, but in this case, the end of the film just feels like sweet mercy.