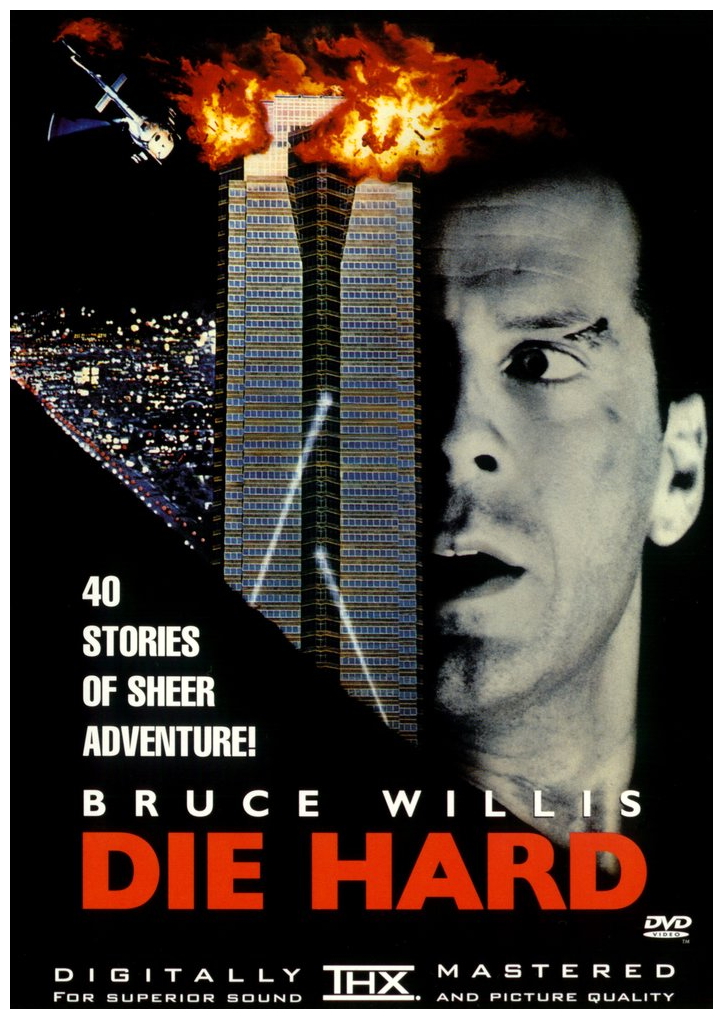 “John McClane is a cop from New York City who is on his way to Los Angeles to see his kids and his wife Holly, who moved to LA because of a job at the Nakatomi Corporation. When he arrives at Nakatomi Plaza, he meets Holly’s boss Joe Takagi and her co-worker Harry Ellis. He and Holly go into a private bathroom and get into an argument. When Holly leaves to give a speech, thirteen armed terrorists lead by Hans Gruber seize control of the building and take the occupants of the thirtieth floor, who are the only ones left in the building, hostage. Luckily, they missed John and he has to figure out how to save the hostages before the terrorists get their way.” (Courtesy IMDB)

Die Hard (1988) is one continuous adrenalin rush, a comic book with a touch of sentimentality. The superhero defeats the moustache-twirling villain and kisses the girl in the final frame. On Christmas Eve, New York City police officer John McClane (Bruce Willis) visits Los Angeles to spend the holiday with his estranged wife Holly (Bonnie Bedelia) and their children. Little does he know that a Christmas party thrown by his wife’s high-tech employers in their glamorous new Nakatomi skyscraper headquarters will be hijacked by terrorists. Led by Hans Gruber (Alan Rickman at his nastiest), the terrorists hold the partygoers hostage while attempting to blow the company safe. McClane is changing in the executive washroom when they strike, and he leaps into dynamic action.

Just as this thrilling towering-inferno-gauntlet escalates for McClane, enter the big guy from the television show Family Matters (Reginald Veljohnson), a rather bland and uninvolving actor (always seems half-asleep) who contributes one of the most boring portraits of a cop eating a Twinkie since Boss Hogg in The Dukes Of Hazzard. The tenuous relationship he forms with McClane eventuates into an alarmingly sentimental and extraneous distraction from the exciting Guy Fawkes re-enactment taking place on the roof above. As the growing media circus on the ground floor presents a host of one-dimensional characters, including crater-faced Robert Davi as a pompous FBI agent reminiscing about flying helicopters in Saigon, director John McTiernan fashions some hell-raising stunts with a conveniently bare-armed Willis escaping napalm-like explosions by abseiling with a firehose through double-glazed windows (bleeding feet and all).

Yet, as the action gets more audacious, McTiernan manages to both embrace and criticise the rampant machismo throughout. This explosive lounge-chair thrill-ride maintains a furious mix of awesome stunts, hit-and-miss wisecracks, and an uncompromising protagonist improvising his way through thirty-five storeys of nerve-racking chaos (the real building is thirty-five storeys, the DVD cover says forty – and misspells the word ‘storeys’). It’s a pity he has to kill twelve terrorists, destroy a skyscraper, skip barefoot through broken glass and save several dozen people before his wife would take him back. Then again, feats such as these are the perennial ingredients of most dreams, nightmares, love songs and Christmas stories. McTiernan makes full use of the setting in a high-rise office block to maximise McClane’s ingenious, barefoot, singlet-clad counter-terrorist tactics – using heating ducts, fire escapes, unfinished upper floors, construction equipment – while the authorities and media squabble uselessly below.

The movie was a surprise hit, partly due to Willis’s tough charm and the human interest story, but mostly because of the sheer ingenuity of the succession of action scenes that sustain tension for the length of the film. Its enduring popularity may have something to do with an ‘if-only’ post-9/11 rancour and wish-fulfilment. Like so many great movies, it seems to anticipate events in the real world, but there are also unpleasant undercurrents of sexism and racism in the script. Based on a novel by Roderick Thorp, the script abounds with wonderful details – like McClane carrying an overstuffed teddy bear through the opening scenes and a bungling SWAT officer pricking himself on a rosebush as his team sneaks toward the besieged building – creating a reality that lends authenticity to the outrageous explosions and bullet-dodging. Pit Willis’s wisecracking character against calculated thespian Rickman, and Die Hard outmanoeuvres a dozen Expendables (2010) movies.

The two DVD set I viewed was pretty old, from the turn of the century yet, despite its age, it had an amazing range of features. A lot of time and money obviously went into the presentation and it was worth it, starting with a crisp clean transfer of the film itself. The commentary by director McTiernan and production designer Jackson DeGovia walks us through the technicalities of set design, offering background information on the actors and explaining decisions to keep certain scenes as opposed to others. Having the combination of the two veterans playing off each other is a filmmaker’s dream, and they don’t hold back on the how-tos, whys or wherefores. The Vault is a collection of bloopers, alternate takes and edited dialogue including a sleazy little flirtation between McClane and a stewardess at the start of the film, plus the repeated gruelling takes in the air-shaft that caused Willis’s singlet to change from white to sweaty brown in the final cut.

Newscasts is a compilation of different takes from all the newscasting scenes. My favourite section has dickless reporter Richard Thornburg (William Atherton) interviewing little Lucy McClane (Taylor Fry). It’s all hand-held raw video footage and director McTiernan pushes the poor child to repeat the words “Come Home” a dozen times in as many different ways. Magazine Articles is exactly that, in-depth articles from industry publications including American Cinematographer which explores Richard Edlund‘s lenses, apertures, film speeds, angles, compositions and themes, augmented with both stills and footage. Cinefex contains the complete text of a remarkable article studying the techniques employed to create the exploding Nakatomi skyscraper and brilliant descriptions of the fireball up the elevator shaft with footage of the process.

I’m one who normally enjoys subtitles, but this DVD has a Text Commentary which is downright annoying. The film plays with the volume at normal level and has these words blinking at the bottom of the screen. The film distracts from the subtitled commentary and vice-versa. Few of the words actually matched the onscreen action, the text commentary flashes past too fast and the dialogue/action tends to dominate the viewer’s attention. Once you lose the train of sentences, the commentary becomes insignificant babble about triangle motifs. There’s also a Branching Version which is exactly the same film with just one deleted scene re-inserted: Before shutting down all the electricity within a four-block radius, the FBI try to turn off the power to the terrorised skyscraper. The villains bypass the disconnection with emergency backup systems, and on we go with the four-block radius scenario. This extra scene is downright clunky and it’s easy to understand why it was removed in the first place. The real surprise comes when the image turns black-and-white for a few seconds because they never finished the special effects.

Other extras include Scene Editing, Multi-Camera Shooting, Audio-Mixing, Slide Shows, complete script, three different trailers and a short promotional featurette. Whew! McClane’s exploits spawned three sequels, all featuring terrorist conspiracies and Willis: Die Hard 2 Die Harder (1990) directed by Renny Harlin, Die Hard With A Vengeance (1995) directed by McTiernan, and Live Free Or Die Hard (2007) directed by Len Wiseman. Aside from these, the first film transformed the action film as we knew it, setting the pace for far too many similarly gung-ho action-hero versus evil-terrorist movies that found their natural home on late-night television. It also caused the Broccoli family to drastically rethink their James Bond franchise, resulting in GoldenEye (1995), the first outstanding 007 film since the seventies. Before you have time to fully contemplate that last comment, I’ll bid you pleasant dreams and look forward to doing the zombie stomp with you again next week when I have the opportunity to lay at your feet another dead bird from the dodgy chicken shop known as Hollywood for…Horror News! Toodles!