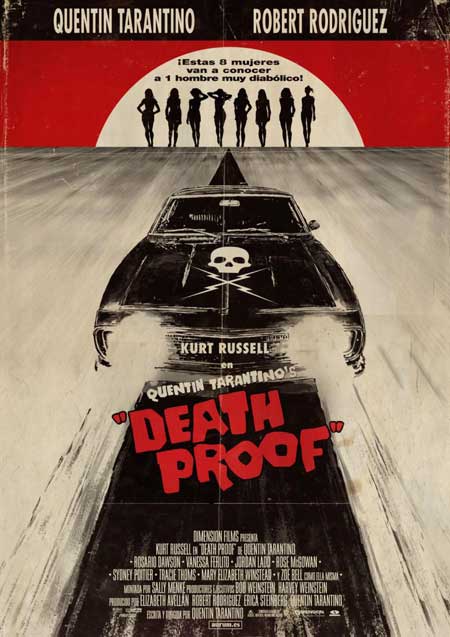 Two separate sets of voluptuous women are stalked at different times by a scarred stuntman who uses his “death proof” cars to execute his murderous plans.

“Death Proof” 2007’s stylized sister film to “Planet Terror” (released as the 2nd part of the “Grindhouse” double feature). The original grindhouse project was a collaborative Quentin Tarantino/Robert Rodriguez team-up originally shown in theatres as a full running 3 hr+ movie session. Of this collaboration, “Death Proof” was the 2nd film shown and directed exclusively by Quentin Tarantino himself.

“Death Proof” is an action-exploitation film specifically designed, edited, and mirrored after the old 70’s grindhouse features that would often feature in downtown theatres. Tarantino chose to go with a primarily muscle car chase film that would draw its inspiration from like 70’s films such as: “Vanishing Point”, “Dirty Mary Crazy Larry” (1974), “Thunder Alley” (1967), and “White Line Fever” (1975) (they were also mentioned in the film). Any fan of the 70’s film era can find all sorts of inspirational references laced within “Death Proof” serving as a demonstration of Quentin Tarantino’s love for the genre and time period.

The film features a stellar cast of actors which include the girl-power lineup of Rosario Dawson, Vanessa Ferlito, Jordan Ladd, Rose McGowan, Sydney Tamiia Poitier, Tracie Thoms and Mary Elizabeth Winstead. Stunt woman Zoë Belle plays herself in a hair-raising stunt-heavy role that re-affirms her knack for showmanship and proficiency. The film is divided into 2 time periods to give some perspective of Mike and his need for road terrorizing. 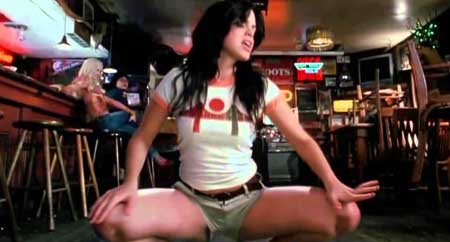 The girls, Arlene (Vanessa Ferlito), Marcy (Marcy Harriell), Shanna (Jordan Ladd) and Jungle Julia (Sydney Tamiia Poitier) meet up at “Gueros”, a local Mexican bar, and then spend the remainder of the night getting drunk at the local bar and grill. Pam (Rose McGowan), a local hippy makes the acquaintance of one of the men at the bar who says his name is stuntman Mike (Kurt Russell). Later that night, Mike informs her that he drives a specialized Dodge Charger stunt car he claims was made “death-proof”. The girls aren’t aware that he has been stalking them all day.

After a night of conversation and witty dialog Mike agrees to drive Pam home while the rest of the ladies make their way back to the lake house to continue the party. Little do they all know that stuntman Mike is a drifter psychopath who delights in murdering women with his vehicle. Soon it becomes a night of terror. 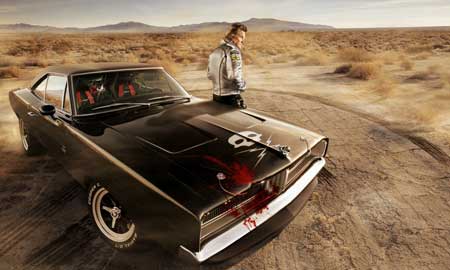 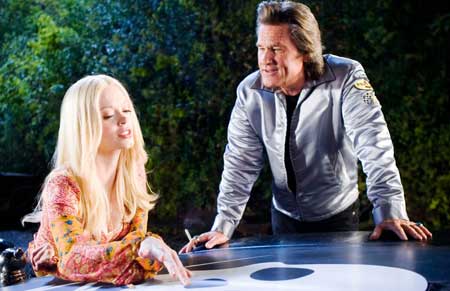 14 months later, we find ourselves in mid-conversation between Abernathy Ross(Rosario Dawson), Kim Mathis (Tracie Thoms), Lee Montgomery (Mary Elizabeth Winstead), and Zoe (Zoë Belle). Zoë and Kim, stunt women themselves, decide that test driving a 1970 Dodge Challenger for the purpose of playing “Ship’s Mast” is more than a opportunity they can pass up. As the joyride begins, stuntman Mike re-appears to challenge them to an afternoon of road rage.

Things turn for the worse for ol Mike when the 3 jaded ladies decide to chase him down and issue some payback. After wounding him in the arm, the 3 soon begin on a major femme fatale game of cat and mouse chase down that ends with the 3 of them whopping Mikes ass into submission. It’s a fantastic round of ass beating like no other coming full circle for ol Mike.

“Death Proof” is a raw, gritty old school payback road film echoing the sounds of influence from films like “They call me 1 Eye“. A solid action film that has Zoe Belle doing her own stunts, Death Proof is definitely worth the watch for a lesson in proper road-action adventure intensity. Actor Kurt Russell give a performance like none other in this dynamic and powerful role as stuntman Mike, making for one of his most memorable performances.

If you want to catch this film, you can do so on the double feature release of Grindhouse featuring both films and all the included trailers.

These films may have not gained the pull as other Tarantino film have, but none-the-less-they are indeed a must see!