The International Horror Festival (IHFF) has announced the Official Jury for the 2016 festival. The Jury will include:
Joshua Rothkopf
Film Editor, Time Out New York
Robert Eggers
Writer/Director, The Witch
Kate Siegel
Writer/Actress, Hush
Peter Phok
Producer, The House of the Devil, The Sacrament, Stake Land
Tuesday Knight
Actress, A Nightmare on Elm Street 4, Wes Craven’s New Nightmare
tomandandy
Composers, The Hill Have Eyes, The Strangers, The Mothman Prophecies
Liz Vastola
Costume Designer, The Purge: Election Year, The Innkeepers, V/H/S, We Are What We Are, Keep The Lights On, Cold in July
Brian Spears
Special Effects Artist, Jessica Jones, The Sacrament, I Sell the Dead, We Are What We Are
Johnny Recher
Assistant Director, The Purge: Election Year, Underworld: Awakening
James Reyes
Light Iron Post-Production Services
Hesta Prynn
DJ
Jim Klock
Executive, Terror Films
Lee Coffin
Indie Theater Programmer
The IHFF is a new event honoring the best in American and international horror filmmaking. The festival will be held October 21-27, 2016 at New York City’s Cinema Village. The IHFF will bring the horror community together for a series of screenings, Q&As, and special events. Selected films will be screened alongside some of the most iconic horror movies of all time.
The festival will feature the world premieres of Shawn Burkett’s Don’t Fuck in the Woods and Scott B. Hansen’s The Possession Experiment, the U.S. premiere of Gedeon Burkhard’s The Key, and the New York premieres of Hannah Mcpherson’s Sickhouse, The Butcher Brothers’ A Beginner’s Guide to Snuff, and John Campopiano and Justin White’s Unearthed and Untold: The Path to Pet Sematary, among numerous other films.
As part of this year’s festival, the IHFF will be celebrating its 2016 Legacy Honoree, horror icon Wes Craven (A Nightmare on Elm Street, The Last House on the Left, Scream), featuring an appearance by Mr. Craven’s widow, Iya Labunka. The festival will also feature a special screening of The Monster Squad with appearances by cast members Duncan Regehr (Count Dracula) and Tom Noonan (Frankenstein’s Monster)
Terror Films has partnered with the IHFF as an official distributor for the festival. The alliance with the distributor will guarantee that all original feature length horror films accepted by the film festival will be reviewed by the creative team at Terror Films for worldwide distribution consideration.
Submissions for the festival are being accepted through August 15, 2016. To submit a film, visit www.internationalhorrorfestival.com
Cinema Village is located at 22 East 12th Street in NYC’s Greenwich Village.
For updates on the festival visit www.internationalhorrorfestival.com
Tickets will go on sale in the fall.
www.internationalhorrorfestival.com
facebook.com/horrorfilmfestival
instagram.com/horrorfilmfestival
twitter.com/horror_filmfest
Share 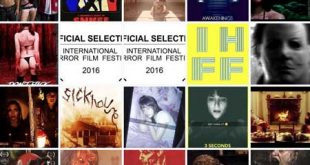