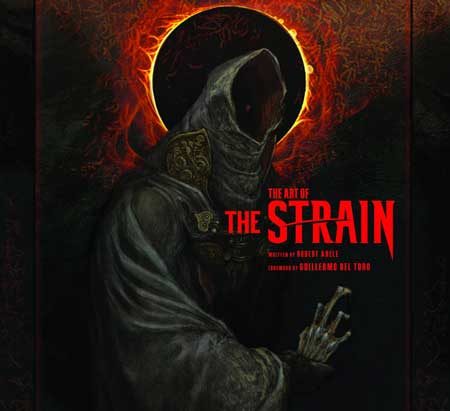 The Strain is a horror drama appearing on FX created by Guillermo del Toro and Chuck Hogan. The show which is now entering its 3rd season offers an adventure-fantasy epic that centers on vampires. Though it might be easily dismissed as “another” vampire series, it in fact is a whole new take on the genre mostly stemming from the creatively inventive designs of master filmmaker artist Guillermo del Toro.

In short, I was not surprised that the series already had a book designed for it that takes its readers thru “The Strain” universe offering all sorts of creative angles to its wondrously macabre creature filled tale. One might quickly make some artistic connections to the past film franchise of “Blade”, however it is Guillermo del Toro’s influence here that sets it apart as simply its own creation.

I was more than happy to take a peek at the new impressive Strain book release presented under the book making wizardry of “Insight Editions“. If you haven’t figured it out by now….then make way for another cool coffee table book.

At 156 pages, the book follows in the same vein as other Insight Editions film art book releases. Hardcover, bound tightly, and providing a perfect home for its illustrious glossy color pages, “The Art of the Strain” is an impressive collective to the works of the production and its behind the scenes creations. Spoiler alert! (if you haven’t seen the series you may want to buy this one and dig in after a proper viewing). But for art fans and practical effects admirers, you will find much inspiration here whether it’s in the makeup, story boarding, creative design or just a base for imaginary thinking.

Now to give you a quick overview here, the book features content from both Season 1 and season 2 (though to avoid any spoilers for myself I had to flip quickly thru the 2nd season inclusions).

“The Art of the Strain” by Robert Abele is an artistic overview of the creativity injected into this series. We get several compelling stories from Del Toro and how things came together over the years. What fans will appreciate most is the level of horror instilled into this series to give it a “rise above factor” over the droll of vampire shows released upon the masses. Characters are explained and featured showcasing their various wardrobes, props, sets, and weapons. Of course the book would not be complete without several drawings and production shots of the notable series coffin used to house “The Master”.

Which leads us to the star of this series, that ominous beast of a man-pire who often seems to transform into multiple facets of presentation thru out the season. Needless to say, much care was given to “the Master” to create someone of power, presence, and spectral resonance that seats him squarely as the series mostly powerful antagonist. Fans will love the Bolivar artwork and the set dressings featured prominently thru out.

If that doesn’t reel you in then those eerie blood worms and feeders will, documenting the special fx work and creative motion editing used to add that extra level of unsettled creepiness. However my favorite aspect of the series which was introduced in the “Blade” franchise is the vampires “stingers”, a organic feeding and kill mechanism that catapults from their throats.

Like the gore, like the costuming, like the practical body makeup suits?…then look no further as this book brings it all home with a bang. But enough talk and review, make sure to check out the link below to grab a copy of this award winning series documented and photographed for your casual reading and viewing!