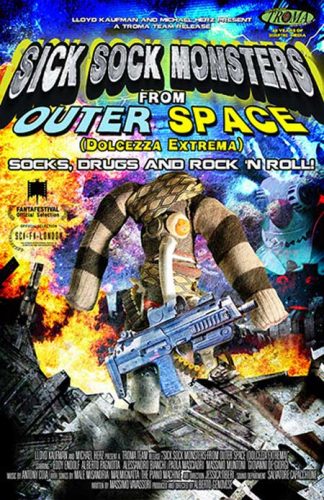 Genovese’s movie takes place in an unspecified year from the future. Captain Pixws and his crew of space pirate sock puppets are forced to delivery tanning beds to every corner of the universe as their star-ship travels through intergalactic space.

Sometimes I get to watch movies that I can’t fully wrap my head around. They are so mind-bogglingly strange that I feel a lack of words when trying to describe my feelings. I’m flabbergasted and left in awe. Guess what? I just saw one of those movies. I saw something that left me speechless, or typeless if we’re talking about writing this review. I have absolutely no idea what I’m going to say because I have absolutely no idea what this movie was. I will try to explain what I experienced.

Sick Sock Monsters from Outer Space is an Italian science fiction movie that featured main characters who were made of socks. It followed the pilot of a spaceship as he travelled through space on a mission from the leaders of the universe. I couldn’t tell you the story outside of that. Many of the sock monsters that worked on the spaceship seemed were formerly in a rock band. The movie was picked up by Troma and released earlier this month.

Character design was a big factor in Sick Sock Monsters from Outer Space. For the most part, the look of the sock monsters was interesting. The ship’s doctor looked like a crazed mad scientist made of socks and household trash. He was one of the two best designed sock monsters. The other was a fishlike character, who I believe was named Tuna. The rest of the characters were okay looking, befitting of the monster moniker that the title gave them. Captain PIXWS, the pilot, was the worst looking of the bunch. It took me half the film to figure out what was what in his face. He was a bunch of junk thrown together with a little hat on top.

As for the story, it had something to do with deliveries to distant planets. I don’t really know for sure. The story was interspersed with weird moments of singing and rock music. There was even a five minute or so psychedelic song and dance scene that involved inflated condoms wiggling around the screen. Sick Sock Monsters from Outer Space is much more experiential than it is a story. There is a story in there somewhere, but the movie end up being about the experience. 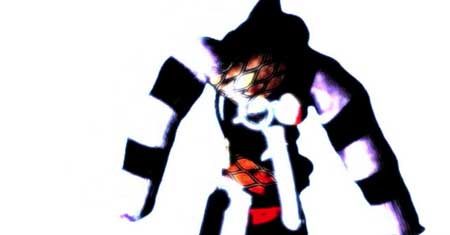 One more thing I want to bring up is how sexual the sock monsters were. Don’t misunderstand what I am saying. I didn’t find the sock monsters sexy in any way. They just had a sexual side to their lives, like any living creature. Early in the movie, the audience was presented with a sex scene between two of the sock monsters. It was a strange sight to behold. That wasn’t the end of the sexual nature of these puppets. Throughout the movie, they discussed their penises and vaginas. There was even a diagram and some flying vulvas. The sock monsters went all out on their sexuality. 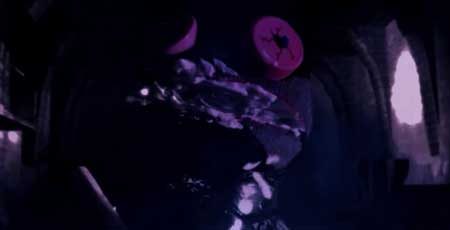 Sick Sock Monsters from Outer Space was strange. Between the sexuality, the singing, the psychedelic sequence, and the strange story that I couldn’t figure out, the movie took me for a ride that I wasn’t expecting. It was a ride that I’ve never experienced before. I wouldn’t recommend this movie because it’s not really my cup of tea, but it was interesting. I’ll be thinking about this one for a long time.