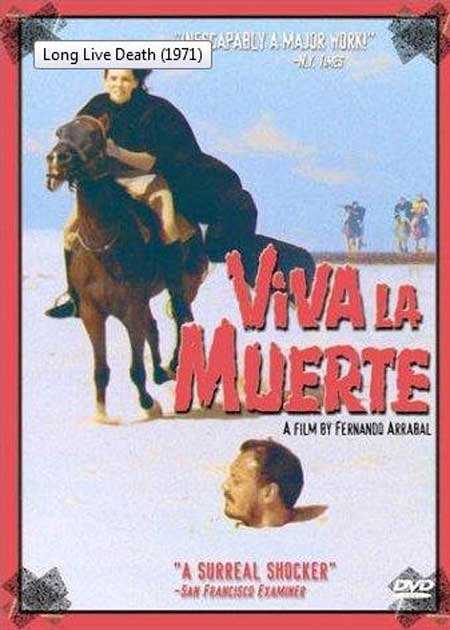 At the end of the Spanish civil war, Fando, a boy of about ten, tries to make sense of war and his father’s arrest. His mother is religious, sympathetic to the Fascists; his father is accused of being a Red. Fando discovers that his mother may have aided in his father’s arrest. Sometimes we witness Fando imagining explanations for what’s going on; sometimes we see him at play, alone or with his friend Thérèse. Oedipal fantasies and a lad’s natural curiosity about sex and death mix with his search for his mother’s nature and his father’s fate. Will Fando survive the search?

Fernando Arrabal’s 1971 film, Viva La Muerte (aka Long Live Death) is set just after the Spanish civil war. Fando (Mahdi Chaouch) is just a boy, around ten years old, but already his life has been irreversibly altered by politics and religion. His father is gone, presumably in prison, and rumors are whispered that the man was an atheist, a “Red,” a traitor. His mother, on the other hand, is a devoutly religious woman and supported the fascists in the war. But being only a small boy, Fando is not being told the whole truth, and so his desire to find out what happened to his father, as well as his confusion and wild young imagination, pushes him forward on his quest for knowledge. 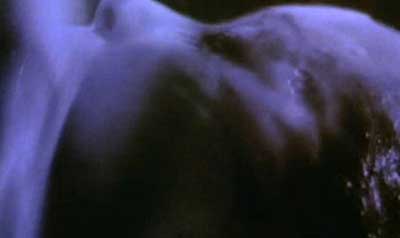 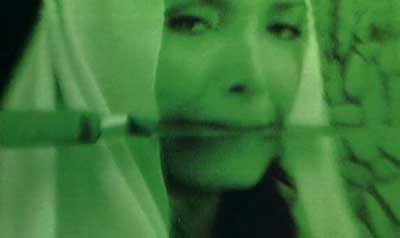 Viva La Muerte, much like Guillermo Del Toro’s The Devil’s Backbone and Pan’s Labyrinth show clearly and brutally the horrors that children face during and after war – in these cases, the Spanish civil war. But the funny thing is, this film also shows how much religion can mess a kid’s mind up. Much like Arrabal’s I Will Walk Like a Crazy Horse, Viva La Muerte has a strong oedipal undertone, but this time feels more intense, more disturbing, due to the young age of our protagonist. As the film goes along, we often find ourselves transported into the imagination and dreams of the young boy and see just how scary and extreme his thoughts are. What we know in real life is that his mom demands respect and obedience from Fando, and his father is missing, either in jail or already executed. But when we see it through the boy’s eyes and imagination, we realize how much his surroundings have affected him.

The confusion of sex is something we can all relate to, having once been young, inexperienced children ourselves. Fando has somehow interwoven his mother, his aunt, religion, and sex all into one big bundle of misunderstood emotions and hormones. While praying, he starts to imagine his mother undressing, and so punishes himself. Later, he “accidentally” catches his aunt, hot and sweaty and half-dressed, shortly after she had made him whip her while she prayed, and there are implied feelings there as well. Add in a good amount of Christian religious imagery, much of it portraying the mother as Mary and Fando as the baby Jesus, and the fact that he goes to a religious school with nuns as teachers (think of the psychological issues that situation has been known to provoke), and a lot of his sexual confusion, or at least the cause of the confusion, starts becoming more clear. 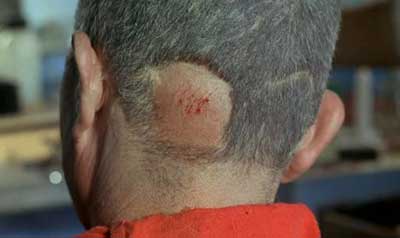 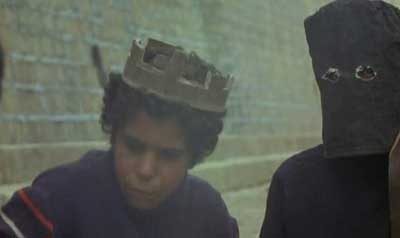 Right up there with his confused perversions are his angry feelings of resentment and loss about his father. Early in the film, he is presented a package containing a toy airplane that is marked “prison,” which we assume is from his dad. When his mother hides the toy from him, he looks for it and stumbles upon letters that seem to indicate his mom had something to do with his father being taken away. Throughout the film, he imagines horrible fates befalling his father – his head being crushed; guards throwing him in prison, chaining him up, and whipping him; his mother sh*tting on his father, and even holding the gun that kills him. Eventually Fando is told by his mother that his father is dead, and she has proof. But that doesn’t stop the boy’s imagination or his quest for the truth. 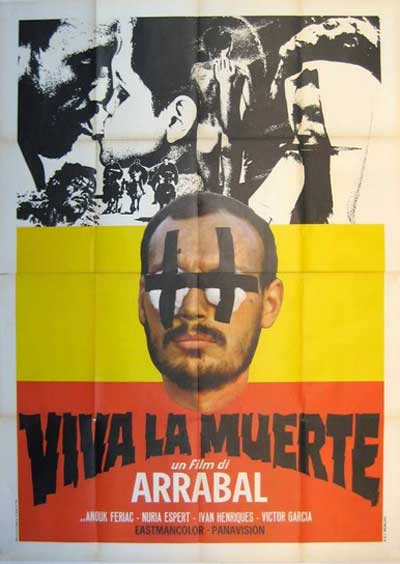 While Viva La Muerte has more of a straightforward narrative than many surreal films do, there is still plenty of imagery throughout, some of it very disturbing. There is a scene, presumably one of Fando’s dreams/visions, of a group of boys attacking a priest and castrating him, then feeding his removed body parts to him (something he seems to enjoy). 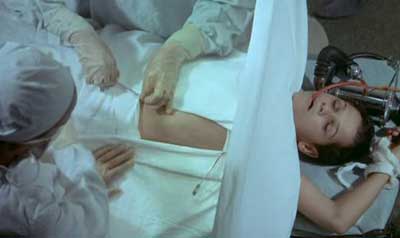 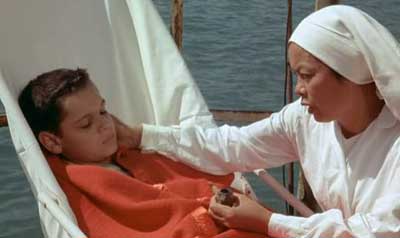 More unsettling than that, a bull (?) is murdered in a room full of people and sliced open, and the mother wallows in the blood, rubbing it all over herself (a scene that may or may not have influenced a similar scene in Marian Dora’s Melancholie der Engel). The bull is then castrated (this action seems to come up a lot in this film – as an aside, when Fando is asked by his aunt to whip her while she prays, she lashes out, grabbing the boy’s genitals and causing him to scream in pain), and the testicles are handed to the mother; she then sews a man into the animal’s corpse and passionately kisses him. Just because this isn’t technically a “horror” movie definitely doesn’t mean that there is a lack of horrifying imagery. 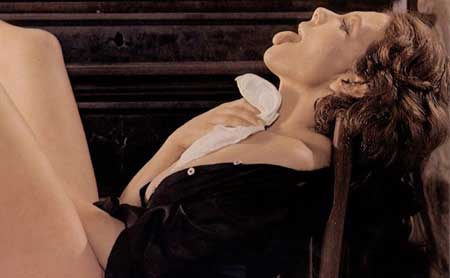 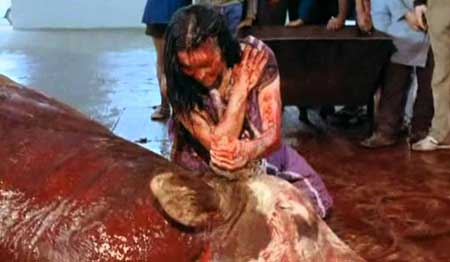 Viva La Muerte is a surreal coming of age story of a young boy pulled in too many directions and not allowed to just be a normal kid. As always, writer/director Arrabal includes plenty of imagery and symbolism to help tell the story within the story. This is no doubt considered a controversial film – any movie involving children, sex, and death will be branded as such – but it doesn’t just aim to shock you, it also tells a heartfelt story of hope and loss.