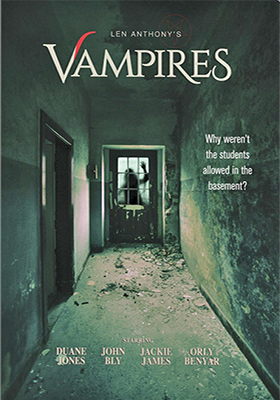 Don’t go in the Basement After Dark …

Originally filmed as the second part of the 1989 cult anthology classic Fright House, this would be the last film of Len Anthony (Murderous Intent, Document of the Dead). Principal cinematographer Ernest Dickerson went on to shoot Spike Lee’s Do the Right Thing and direct several episodes of AMC’s iconic horror series The Walking Dead.

With a unique spin on the vampire genre, full of camp, heavy synth music and thought-provoking horror, Vampires is the perfect timestamp of ’80s, schlock cinema.

An eager, young student, Ione (Orly Benyar, Fright House, Ninja Academy) is excited to begin the next chapter of her life when she is awarded a scholarship to attend the prestigious art school at the Abadon estate in New England … Which happens to have a distant history of working with the criminally insane.

Soon after arriving on campus, she begins to realize something is amiss with the student body. When some classmates go missing – and no one can seem to account for their whereabouts – Ione decides to investigate.

While searching for clues, Ione encounters Dr. Charles Harmon (Duane Jones, the doomed hero from the horror classic Night of the Living Dead, Ganja & Hess, To Die For), who tells her about Madeline Abadon (Jackie James, Over the Brooklyn Bridge, Fright House) and her quest to suck the youthful energy from students in order to gain immortality.