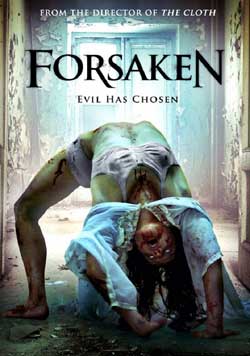 When a Priest discovers his wife is deathly ill, he decides to go against his faith and use his knowledge of exorcisms to possess her in order to save her life.

Sometimes it’s enough to look at the poster to know what kind of movie one’s dealing with. When I see a pale girl in a nightgown stuck in a semi-intermediate yoga pose I assume that what I’m going to see is going to be a cliche-ridden possession flick, and 99% of the time I’m right.

Forsaken is marketed as a possession movie, but writer/director Justin Price (The Cloth, Dark Moon Rising) tried to add to the mix so many things that the effect is a hard to follow, incoherent mess that does not make much sense even in terms of its internal logic.

Paul is a former exorcist whose wife, Emily, is dying of brain cancer. The illness makes her behave in an increasingly strange way – we see her creepily sneaking up on her sleeping daughter, Kenzie, and cutting off parts of her arm in order to cook them. Paul, being told by a doctor that there is no hope left for his wife, decides to allow a demon to possess her so she can live longer. Obviously it does not go well and Paul has to take his possessed wife to a ranch and lock her up for her own and everyone else’s safety.

There is also a Ouija board session gone awry and we get to meet a cult that wants to use Emily for a ritual.

Forsaken is as poorly made as it is written. It feels like a collection of scenes that were taken from several short films and somehow ended up being joined together. The excessive use of a fade to black transition only reinforces this impression. The lighting is very dim and while in some scenes it helps establish a mood, most of the time it is just annoying and makes it nigh impossible to figure out what is happening on-screen.

On the other hand, not much really happens in Forsaken. The viewer is forced to sit through one mumbled, terribly acted dialogue after another. Fortunately there is no need to pay attention to whatever is being told, because it literally doesn’t matter. The movie keeps ignoring the rules of its own mythology quicker than it can establish them. Here’s an example:

When Paul asks a priest for a blessing before he puts a demon in his wife it is revealed that the two used to work together as exorcists. Not only that: In a flashback we see them exorcising a possessed girl. The cause of this possession? The older priest wanted his daughter to be healed from her condition so he decided to let a demon possess her body. Sounds familiar, doesn’t it? But it doesn’t matter because after discussing the nature of heaven, hell and spiritual realm they both come to conclusion that this idea is not that bad.

I wanted to complain about the rushed ending, but watching Forsaken is such a painful experience that I was just thankful it ended. Actually, rushed might be an understatement in this case. In the final couple of minutes we are treated to several “dramatic” reveals: Emily’s doctor is a member of a satanic cult, a girl who tends to Paul’s horses is a member of this cult too, Paul’s daughter (Kenzie) was a victim of a serial rapist, the Ouija board session in which Kenzie participated caused another demon to break free from the spiritual realm and Paul has no soul now, because the devil took it as a part of the whole demon-in/cancer-out deal. How long does it take to throw it all in the viewer’s face? 15 minutes. We’re introduced to all these things in the last 15 minutes of this film. How did the director manage to wrap it up? Well, he didn’t. The film ends with Paul running towards Emily (she’s now tied to the cross by the cultists) and when he gets to her… The credits start rolling. That’s it. No conclusion, no post-credits scene – nothing. Justin Price, like a park flasher, shows us everything he’s got in one moment and runs away with no excuse or explanation whatsoever. 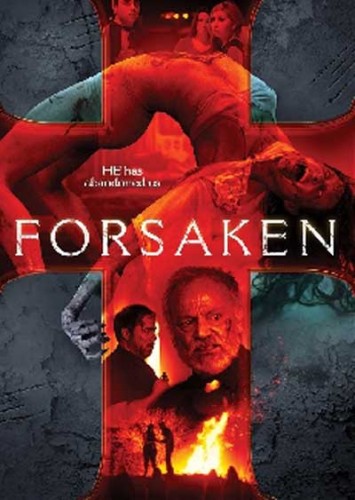 Forsaken is a terrible movie with no redeeming qualities. No unintentionally funny scenes, no memorable scenes, no good performances. Painfully boring, terribly acted, poorly written. Avoid at all costs.