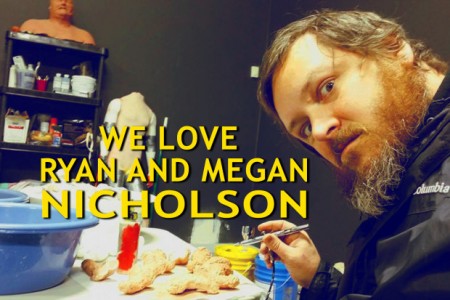 We Love Ryan and Megan Nicholson!

An excerpt from the IndieGoGo page:

As some of you may know, our dear friend and Horror Film/Special Effects Makeup LEGEND Ryan Nicholson has been in the hospital since Tuesday, February 23rd 2016. His wife Megan and son Taylor have been by his side helping him through this ordeal.

Due to the nature of his condition, we are not exactly sure when Ryan will be able to return to work. We know that Megan has turned down work opportunities in order to be with Ryan at the hospital.

Let’s make sure that when Ryan returns home after his surgery (hopefully next week) him and Meg have everything they need to ensure Ryan is comfortable and can heal and recover quickly!”

In late 2003, I went to the Fireside Bowl in Chicago to see a punk band called the Traitors. The place was filthy, the crowd was drunk and rowdy, spitting beer at the band and jeering them, and the Traitors sent middle fingers and insults right back at them. They played with an intensity that was angry and fast and raw. The guitar player went out of tune and smashed his guitar across a cinder block on stage, then a quick replacement and a 4-count and on with the show. The singer was spit on, pushed around, pummeled with rolled up socks, and dragged from the stage numerous times, eventually saved by the bass player, looking like a black-masked assassin, who barely missed a note of his rapid fire bass line when his fist connected with the face of the rowdy member of the crowd. The whole place was electric, and it felt dangerous in a way that made you genuinely worried about your safety, but you couldn’t help feeling excited that you got to witness this monster steamrolling its way toward you. 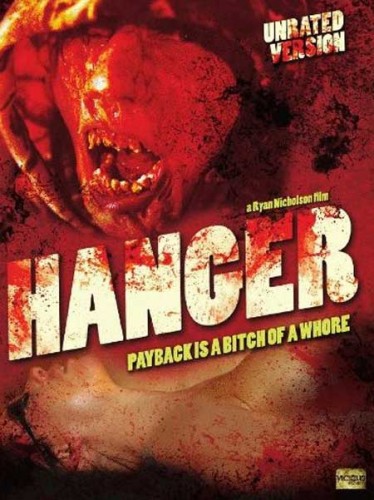 That’s how I feel about a Ryan Nicholson film. I first found Gutterballs at a Fangoria convention in Chicago back in 2009. I went home that night a little buzzed, having taken in the excitement of my very first horror convention (as well as a couple drinks), and decided to continue my night by dipping into my new haul. From the very first scenes, Gutterballs lets you know that it’s not taking any prisoners, that no one is safe, that anything, literally ANYTHING, could happen…and I absolutely loved it. It made me cringe, it made me laugh, it made me uncomfortable – exactly what a good horror movie hopes to do. And that is what the films of Ryan Nicholson do. Hanger, Collar, Live Feed, Torched, the list goes on. Add in the make-up effects he has been creating since the mid-90s in everything from Millenium to Stargate SG-1 to Smallville, and now with his wife, Megan, under the Plotdigger EFX name, in movies like Vendetta, the Blood Feast re-make, La Petite Mort II, Grave Encounters II, and most recently Dead Rising: Watchtower and the just completed Dead Rising: Endgame, and it is clear what a huge place Ryan has in making our little world that much cooler. And now he needs our help.

I’ve never met Ryan. Not once. Never even had the chance. And I’ve just briefly talked to Megan, just in passing over the internet a couple times. But this horror thing we all do, us writers and reviewers and filmmakers and behind-the-scenes workers and convention-goers and fans, it’s kind of a unifier. The saw is family, right? Well, really, the horror is family, and the way I see it, we need to help each other out, because who else is going to? So please join us in sending your thoughts and support and good wishes to Ryan and his family, and if you’re able, maybe a couple bucks to help take off some of the stress going into the trying times ahead. We do love you, Ryan Nicholson, so hurry up and get better, we need more of your trademark sleaze!