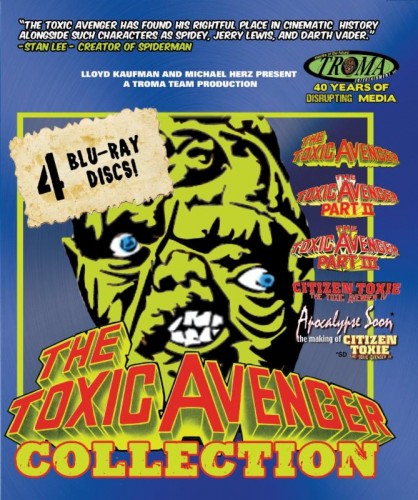 “The Toxic Avenger Collection”, the first ever complete Blu-Ray box set to include all 4 films from the world famous 1000 film Tromarchives and the additional full length documentary title, “Apocalypse Soon: The Making of Citizen Toxie”, was released this week by Troma Entertainment, it was announced today by Lloyd Kaufman, Troma Entertainment prexy and creator of “The Toxic Avenger”.

The final feature mentioned above, Gabriel Friedman’s, “Apocalypse Soon: The Making of Citizen Toxie” (2002), is the Tromanticized mockumentary of the magnanimous creation of “Citizen Toxie” and the highly ethical filmmaking process in Tromaville.

Tromaniacs and cult horror fans around the globe are sure to pop Toxic boners for the Blu-Ray release of “The Toxic Avenger Collection”, available at www.tromashop.com.