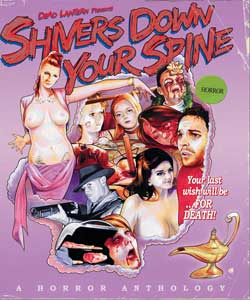 SHIVERS DOWN YOUR SPINE is a group of 10 short films, offering horror across the entire spectrum from comedy to slashers to a crime film noir and many more!

I love myself a good horror short. The older I am the more I appreciate a short, well-thought story with a clever, witty twist, and with the mainstream horrors getting more and more predictable and safe with every year, low-budget passion projects are little glimmers of hope that always manage to restore my faith in the genre. Anthologies are very helpful when it comes to keeping track of these little gems and more often than not they do a great job tying them together.

Shivers Down Your Spine, produced by a horror-enthusiast David Kister (Dead Lantern Pictures), is a horror anthology inspired partially by the Arabian Nights – a framing device in this case is a story of a female djinn Sabihah (Megan Shepherd, who is clearly having the time of her life playing this character) who fulfills the wish of Jeff (Steve Eaton) and tells him 9 short horror stories. It gives us 10 stories, and I didn’t even have to count them, because the characters in Out of the Lamp (that’s the title of the frame story) break the 4th wall so often that they could give Deadpool a run for his money. And they do it extremely well.

Every time I’ve noticed something annoying or poorly executed in any of the shorts, Jeff or Sabihah acknowledged it with a witty remark when the story was over, a great exaple being Jeff’s complaint that he couldn’t understand what a vampire said in one of the stories and coming to conclusion that he’s “gotta work on these audio issues”. There are more moments like that, but I don’t want to spoil them to anyone. What’s important is that this self-awareness is not used as a way of courting the viewer – it is just a playful way of admitting that not everything is perfect. It’s basically Kister saying “OK, maybe this isn’t the coolest thing ever, but it’s still fun, eh?”. And you know what? He’s right!

But enough chit-chat, let’s dissect this baby and see what it’s made of:

A girl is alone in her house on halloween, supernatural shenanigans ensue. A weak start that made me worry about the rest of the anthology. Thankfully, it only gets better from here.

To be fair, I have to admit it had some good sfx.

Probably the best one of the bunch, at least according to Sabihah, Jeff and me. At the horror convention a man tries to explain to his friend that a hooker he just killed in his room is a vampire. While the acting is not exactly top notch, the dialogue is so hilarious that it didn’t bother me much. I still can’t figure out what the vampire said at the end. Dammit!

Another dialogue-heavy story. A great combination of morbid and funny. Bonus points for the music that made the twist even crazier.

A ouija board session gone awry, but not in the way I initially expected it to go. The twist is actually surprising (at least one of them). The sfx are very good, although the camera work could’ve been better, especially in the final sequence.

The only story (other than Out of the Lamp) where we get to see Sabihah (and she’s quite a sight to behold). This one is something you’d see in the Tales from the Crypt: Obnoxious, unlikable character gets a great opportunity and wastes it, because “…all pathetic losers are their own worst enemies”. Funny, ironic and well-acted (Kevin Casey playing a delivery man almost steals the show).

A quasi-noir short film about a man who’s on a mission to make somebody disappear. The performances are solid, it’s well-written, but the nori stylisation is slightly distracting. It’s also he first of three more serious shorts in this, otherwise quite light-hearted, anthology.

Another serious one: A girl who survived the attack of a serial killer on Valentine’s Day goes on her first date since the accident. After a strong opening scene it becomes rather vapid and boring.

The darkest of them all. A girl’s sanity slips when she starts suspecting that her boyfriend is cheating on her. Well-acted and well-written example of a schlocky (in the best sense of the word) tearjerker. 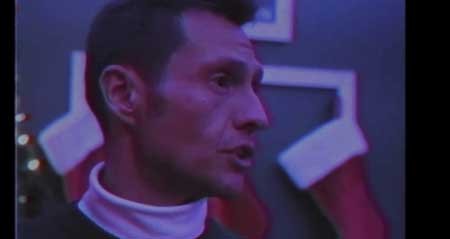 80’s nostalgia-fest that pays homage to EC Comics (thanks, Sabihah!). They even decided to make it look like it’s a VHS-rip (complete with blurry horizontal lines appearing from time to time), which made me go on a synthwave binge – thanks, Dead Lantern Pictures!

It’s a short slasher about a group of teenagers who are trapped in a building with a serial killer dressed as a Santa Claus. It’s crazy, schlocky and nostalgic – a perfect end to this anthology.

It’s only a framing device, so I didn’t expect much, but sometimes I cought myself thinking “I wonder what will Sabihah or Jeff have to say about this one…”. The acting is what I call “web-series level”, but there is undeniable chemistry between Megan Shepherd and Steve Eaton so I couldn’t care less about their acting chops as long as they’re trying. Out of the Lamp is funny, ties everything together and they use it to announce a sequel – what’s not to love? 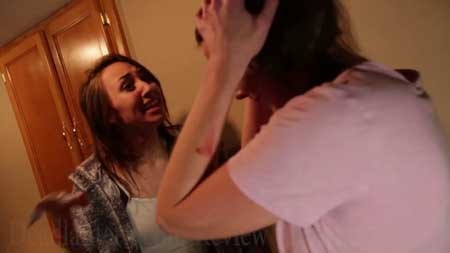 Shivers Down Your Spine is a masterpiece in its category – it sure has its flaws, but it is happy to acknowledge them all and invite the viewer to ignore them, sit on a couch with Sabihah and Jeff and simply have fun.

P.S. Be sure to check out the cover art – I’m not a poster person, but I’d love to have this little work of art on a wall.