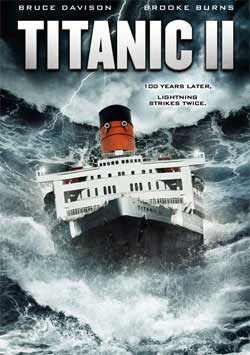 On the 100th anniversary of the original voyage, a modern luxury liner christened “Titanic 2,” follows the path of its namesake. But when a tsunami hurls an ice berg into the new ship’s path, the passengers and crew must fight to avoid a similar fate.

Oh, the humanity!!! Oh wait, that was another disaster. The good folks at The Asylum have done it again as we have yet another knock-off, this time cashing in on one of the granddaddy of all films, James Cameron’s Titanic.

Shane Van Dyke (grandson of Dick Van Dyke) takes on triple duty this time as he stars, writes and directs this maritime disaster, or is it just a disaster? Joining him on the ill-fated voyage are some familiar faces including Brooke Burns, Bruce Davison (veteran actor recently in Camp Hell) and Marie Westbrook (Hillside Cannibals and Dracula’s Curse).

The movie begins with what I believe might be a movie first, global warming surfing. I’m not making this up. A guy jumps with his surfboard into the frigid waters near Greenland. He waits patiently for a large chunk of the glacier to fall into the water so he can ride the wave it creates. It only goes downhill from here.

Cut to the Queen Mary docked in Long Beach, CA. I’m sorry, I mean the Titanic 2 docked in New York. I can understand the appeal from a budget standpoint to use a real ship from back in the day that is now permanently parked as a tourist attraction to stand in as our grand, new ship, but is it necessary to also include shots of the Russian submarine that is parked right next to it? Although it was fun to see, having been there myself. Side note: All joking aside, if you get a chance to go, do it. The ship is supposedly haunted, to boot. They even give a ghost tour.

But I digress. Shane plays Hayden Walsh, CEO of Walsh Industries and host of what will be the maiden voyage timed up so that it will set sail on the 100th anniversary of the original Titanic. Also on board is Amy Maine, played by Marie Westbrook. She is a nurse who also happened to date Hayden back in the day.

Meanwhile her father, Captain James Maine of the Coast Guard (Bruce Davison) is up in Greenland at the request of a Dr. Kim Patterson (Brooke Burns). Seems a really huge chunk of glacier is about to break away and fall into the ocean, creating a tsunami. They just finish their discussion about that very scenario when boom, it happens. Barely making it back to the chopper, they escape to the air and watch in horror at the wave created. The good captain realizes he must get to the ship to save his daughter.

Back on our ship and in total bliss, our passengers are having the time of their lives. That is until they receive word of a certain wave headed their way. It isn’t long before panic sets in and the masses start to run. Anywhere, everywhere. And what a sight! One great scene has one person after another tripping on the last step of a grand staircase. I think it claims more victims than the tsunami.

These are really the best scenes in the movie as it’s always fun to watch a bunch of crazed extras feigning terror and panic. And it isn’t long before our wave smashes into the ship. From here we tread more familiar territory as lives are saved and lost. But wait! Another, even larger chunk of ice has broken away and created an even bigger wave!

This is one of those movies that falls into the category of so bad it’s good. God bless the cast and crew, they really tried, but I found myself laughing most of the way through. The acting is mega-overdramatic, the special effects, well, if you are familiar with our friends at The Asylum…. And I won’t even go into the continuity aspects of the film.

All in all, see it once if you can catch it for free or cheap rental. Good for a laugh with a bunch of friends. Believe me, you’ll go all MST3K over it.