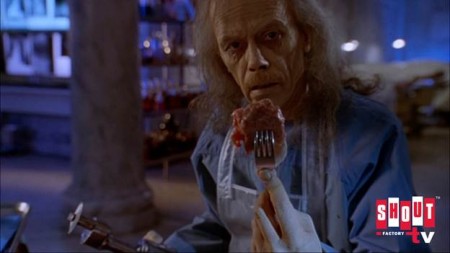 This July, summer heats up with a plethora of new programming on Shout! Factory TV that is sure to beat those binge cravings. Shout! Factory TV is unveiling Summer of Fear, a fright fest sure to please! A collection of classic horror films debut this month, featuring Body Bags, Day of the Dead, Night of the Demons, Q: The Winged Serpent, The Final Terror and many more.

Shout! Factory TV grants an insider’s insight into these films with the premiere of audio commentaries on the streaming service. This month, directors John Carpenter, George A. Romero, Kevin Tenney, and many more actors, writers and directors of your favorite horror classics comment on the films that impacted their careers.

Discover, experience and binge-watch thousands of hours of culture-defining entertainment for free on Shout! Factory TV by visiting ShoutFactoryTV.com on your desktop or through a mobile browser.  Download the Shout! Factory TV app on Roku to watch through your television set.

Young college student Anne (Alex Datcher) working the late shift at “The Gas Station” while a killer is on the loose. Then, middle-aged business man Richard Coberts (Stacy Keach) can’t stand the thought of losing his “Hair” and he’ll do anything to keep it. And finally, Brent Matthews

(Mark Hamill), a baseball player submits to an “Eye” transplant after he loses an eye in a car accident. After going through the revolutionary eye surgery, he ends up getting more than just his eye sight back.  Audio commentary with director John Carpenter and actor Robert Carradine on “The Gas Station,” director John Carpenter and actor Stacy Keach on “Hair”, and producers Sandy King and Justin Beahm on “Eye”.

Day of the Dead (with commentary)

In this the third film in the continuing saga of the undead from writer/director George A. Romero (Night of the Living Dead, Dawn of the Dead, Land of the Dead, Diary of the Dead, Survival of the Dead), a small group of scientists and soldiers have taken refuge in an underground missile silo where they struggle to control the flesh-eating horror that walks the earth above. But will the final battle for the future of the human race be fought among the living or have they forever unleashed the hunger of the dead? Audio commentary with writer/director George A. Romero, special make-up effects artist Tom Savini, production designer Cletus Anderson and actress Lori Cardille.

Night of the Demons (with commentary)

It’s Halloween night and Angela is throwing a party…but this is no ordinary Halloween party. Everybody’s headed to Hull House, a deserted funeral home, formerly the home of a mass murderer. But when the partygoers decide to have a séance, they awaken something evil…and these party crashers have a thirst for blood. Now it’s a battle for who can survive the night in Hull House. Audio commentary with director Kevin Tenney and actors Cathy Podewell, Hal Havins, Billy Gallo and FX artist Steve Johnson.

Q: The Winged Serpent (with commentary)

(David Carradine, Michael Moriarity, Candy Clark)
Its name is Quetzalcoatl, a dragon-like Aztec god that is summoned to modern-day Manhattan by a mysterious cult. But just call it “Q”…because that is all you’ll be able to say before it tears you apart! Roosting within the top of the Chrysler Building, this fearsome monster begins raining blood – from the bodies of window washers, construction workers and rooftop sunbathers alike – onto the streets of New York! Audio commentary with writer/producer/director Larry Cohen.

The Final Terror (with commentary)

A group of young campers out for what they hope will be a fun-filled weekend find their plans spoiled by a disguised, merciless killer who stalks the forest in search of new victims. Soon they are caught in a terrifying web of bloodshed and murder. It is up to the remaining few to defend themselves and put an end to the terror-filled weekend.

After a terrible boating accident killed her family, shy Angela Baker went to live with her eccentric Aunt Martha and her cousin Ricky. This summer, Martha decides to send them both to Camp Arawak, a place to enjoy the great outdoors. Shortly after their arrival, a series of bizarre and violent “accidents” begin to claim the lives of various campers. Has a dark secret returned from the camp’s past…or will an unspeakable horror end the Summer season for all?

From its grisly makeup effects to the truly shocking, and unforgettable, climax, Sleepaway Camp is no ordinary slasher film…it’s a cult classic!

It’s called a Ouija Board and it’s been used for thousands of years to communicate with the souls of the afterworld. For beautiful Linda Brewster (Tawny Kitaen), it brings the playful ghost of a dead ten-year-old boy. But when the friendly spirit develops a sudden taste for violent murder and demonic possession, Linda’s boyfriend (Todd Allen) and her former lover (Stephen Nichols) must race to destroy the ferocious portal of the damned.

Based on the highly acclaimed IDW Publishing graphic novel written by Steve Niles (30 Days of Night), Steve Niles’ Remains is set in a chilling postapocalyptic Reno, Nevada, and follows the survivors of a bizarre accident that reduced most of the world’s population to zombies. The group takes refuge in a vacant casino and fights a losing battle against the undead, who grow steadily stronger, smarter and more aggressive by the minute.

Eleven years ago on the night of Halley’s Comet crossing, Chris’ parents were brutally killed. With a new comet appearing, everyone in Chris’ building is celebrating the event, partaking in the festivities. As the night falls, Chris starts to discover that people are acting strange – and it seems to somehow be connected to the comet. People are becoming disoriented and violent and it doesn’t take long before they start mutating into something from beyond this world. In a fight for survival, Chris has to try to escape from his building with the help from some other tenants – but will they make it out alive?

House in the Alley

Boasting a large cult following overseas and a film festivals favorite, HOUSE IN THE ALLEY is a gripping haunted house thriller that exposes the weaknesses of the human psyche and deftly combines suspense, horror and emotional dramas.

A young couple, settling into their new life in their spacious home, lose their newborn to a miscarriage. After the tragedy, Thao is inconsolable and won’t let her baby’s body leave the house. She soon begins suffering from terrifying visions and she slowly begins to lose her sanity. Her husband, Thanh, soon begins experiencing strange things around their home and when his wife turns on him, he must race to uncover the secrets of the house in the alley before they both lose their sanity…and their lives.