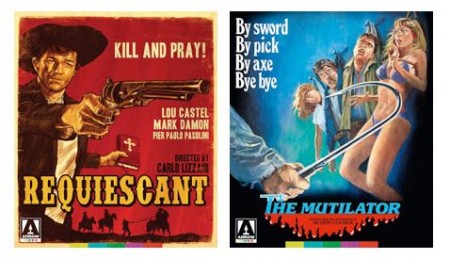 MVD Entertainment Group furthers the distribution of Arrow Video in the US with a strong schedule of new titles for September…
Requiescant – Dual Format DVD & Blu-ray – ORDER HERE
Directed by Carlo Lizzani (Wake Up and Kill, The Hills Run Red) and with a superb soundtrack by Riz Ortolani (Day of Anger, Cannibal Holocaust), Requiescant – Latin for ‘Rest in Peace’ – ranks among the finest Spaghetti Westerns. Alex Cox named it the “one film to prove that the Italian Western was not solely Sergio Leone’s”. Lou Castel (Fists in the Pocket, A Bullet for General) plays a young man who was raised to be a pacifist by a travelling preacher after Confederates massacred his family. But when his step-sister runs away, the pursuit reveals a natural talent as a sharp-shooter as well as a bloody and unexpected confrontation with his past. Joining Castel are an impressive array of performers, including Mark Damon (Black Sabbath, The Fall of the House of Usher) as the sadistic aristocratic villain, Franco Citti (Accattone, The Godfather) as his henchman, and the great Italian filmmaker Pier Paolo Pasolini (Salò) in a rare acting role as a revolutionary priest.
Bonus Materials
– Brand new 2K restoration of the film from the original camera negative
– High Definition Blu-ray (1080p) and Standard Definition DVD presentations
– Optional English and Italian soundtracks in uncompressed PCM mono audio
– Newly translated English subtitles for the Italian soundtrack
– Optional English subtitles for the deaf and hard of hearing for the English soundtrack
– An all-new interview with Lou Castel, recorded exclusively for this release
– Archive interview with director Carlo Lizzani
– Theatrical Trailer
– Reversible sleeve featuring original and newly commissioned artwork by Gilles Vranckx
– Illustrated collector’s booklet containing new writing on the film by Pasquale Iannone

Although the slasher film was in decline by the mid-1980s, there were still some grisly delights to be had… and they don’t come much grislier than writer-director Buddy Cooper’s sickening stalk-and-slash classic The Mutilator! When Ed receives a message from his father asking him to go and lock up the family’s beach condo for the winter, it seems like the perfect excuse for an alcohol-fuelled few days away with his friends. After all, his dad has forgiven him for accidentally blowing mom away with a shotgun several years ago… hasn’t he? But no sooner are the teens on the island than they find themselves stalked by a figure with an axe (and a hook, and an onboard motor) to grind… Originally entitled Fall Break (watch out for the incongruous theme song of the same name!), The Mutilator has earned a reputation amongst horror fans as one of the ‘holy grails’ of 80s splatter mayhem due to its highly inventive (and not to say, decidedly gruesome) kill sequences, courtesy of FX wizard Mark Shostrom (Videodrome, Evil Dead II). Finally making its long-awaited bow in High-Definition, The Mutilator has returned to terrorise a whole new generation of horror fans!