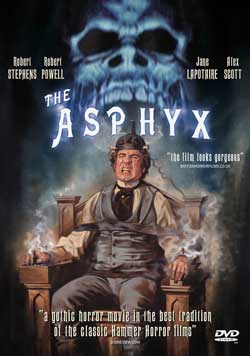 English country squire Sir Hugo Cunningham searches for immortality by literally ‘bottling up’ the Spirit of the Dead, or Asphyx.

Rightfully viewed as a classic gothic horror film, the Asphyx is a movie that needs to be looked at on two differing levels. First is in the sense of how it fares for modern audiences used to today’s offerings, and also how it holds up as a film from the period.

For today’s audience this movie may not have great appeal. While atmospheric and interesting, the pacing is far slower than a modern audience will generally tolerate. Lengthy portions of exposition explain much of the story and there are no real scares (jump or otherwise) to look forward to. That just isn’t what gothic cinema is about. The slow burn of mild horror mixed with romanticism just is not going to be for everyone. That, coupled with a small number of problematic story elements, will most likely turn off the casual viewer. If you are looking to be frightened, this is not your movie. However, if you are a fan of the gothic genre? This really is a landmark film.

The dark and brooding atmospheres of the film are masterfully framed and styled by Freddie Young OBE, winner of three Academy Awards for his cinematography (including for his work on Lawrence of Arabia and Doctor Zhivago). Considered one of the great, his work alone sets this film up as visually stunning as the cinematography itself takes part in the telling of the tale.

The award cast, led by Robert Stephens (once considered the heir apparent to Sir Laurence Olivier and eventual winner of the Olivier award) and Robert Powell (perhaps best known for playing the titular role in Jesus of Nazareth) are joined on screen by Toni award winner Jane Lapotaire (who is rather wasted in this role). Together they weave a compelling tale of scientific curiosity, loss, obsession, and revenge.

In a tale worthy of Doyle or Poe, Stephens plays Sir Hugo Cunningham, a man of privilege with an interest in the spiritual and supernatural. When several photographs are presented that all seem to show the soul as it is leaving the body, his curiosity is only heightened. When a moment of idealistic gaiety is cut short by family tragedy and Sir Hugo’s moving picture machine reveals that it is not the spirit leaving the body, but one moving towards and merging with a person about to die. With his first glimpse of an asphyx, his curiosity becomes obsession. 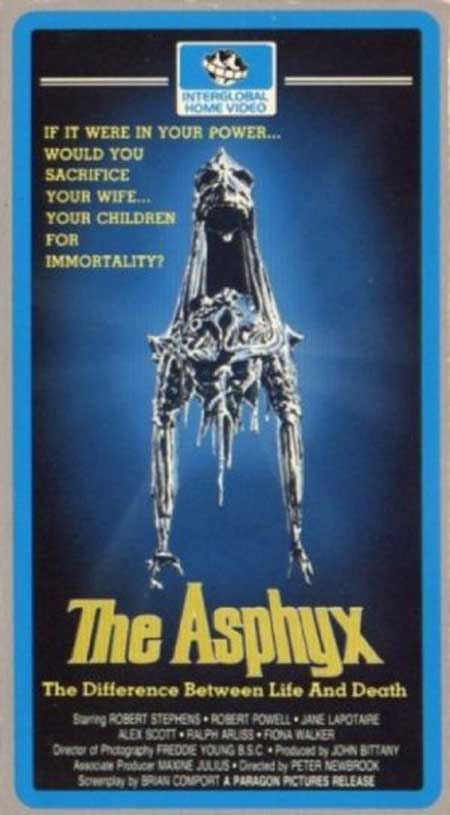 Sir Cunningham continues his experiments with the assistance of his daughter’s suitor (also his adopted son) Giles. One of the more memorable lines in the film is Giles’ proclamation “so you invoke your inconsolable grief to justify your pointless experiments?” Indeed he does. Undaunted, Sir Hugo presses on, not knowing at what cost his discoveries will come.

We watch as Hugo explains that a position of privilege comes with responsibilities and it is those feelings of caring for one’s fellow man that lead Sir Hugo to be part of the movement to abolish the death penalty. When a public execution is scheduled, Hugo is asked by his partner in the movement (and spiritual society) to document so that people can see the horrors carried out in their name. It is there that Sir Hugo makes his great discovery, actually sighting the spirit by using a special light booster of his own design.

Realizing that his light actually had the power to hold the spirit (an Asphyx) in place, and theorizing that there is only one such spirit for every living creature, the mind of Sir Cunningham turns rapidly from altruism to a tormented and obsessive quest for immortality. When his quest costs his daughter her life, the level of emotional angst and brooding increases until a well thought out climax. 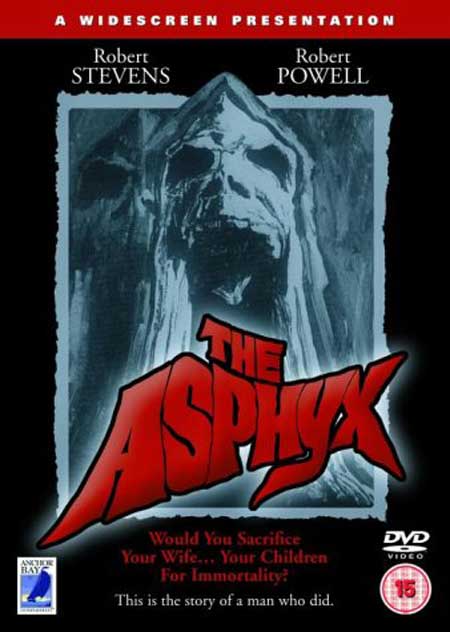 That isn’t to say that this movie doesn’t have its problems, although none completely derail the film. Some of these problems aren’t even the fault of the film. As Giles and Hugo combined light streams to force the asphyx into a trap, I immediately was reminded of Ghostbusters. This bit of pop-culture is so ingrained that “don’t cross the streams” sprang to mind and pulled me out of the moment. That this film predates Ghostbusters by a mere 13 years, the similarity in the latter film might have even been intentional and/or inspirational.

The other two big issues with this movie though, are certainly within the domain of the movie itself. The ending of the movie includes one of the worst rubber masks seen used on screen. Meant to show a man of great age, it looks more like a child trick-or-treating as an old witch. Indeed, this mask looks familiar and may have been used in other movies who may have run out of budget (or ideas) towards the end of their shooting schedule. Finally there is the often, and rightfully, maligned guillotine scene.

It is discussed in the story that an asphyx is drawn by a real fear of death. So to lure one in, one must essentially be attempting suicide. Sir Hugo uses controlled electrocution, and does so successfully. That, for his daughter, he chooses to use a rigged guillotine is just beyond the realm of belief (and it ends just about how you would expect). This lazy insertion for such a predictable result is the only true disappointment in an otherwise thought provoking and compelling film.

Make no mistake, the Asphyx is not filled with chills, scares, or real fright. Instead it conjures a feeling of existential angst as it wrestles with some of the darker philosophical thoughts of life, death, and immortality. With a twist towards the end of the story that is not a gimmick, but instead a well-turned bit of grief-filled misdirection, this is a must see for fans of gothic cinema.