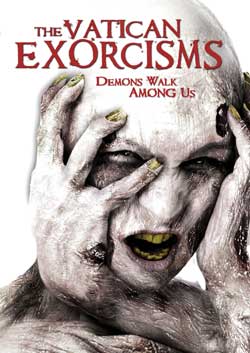 The Vatican Exorcisms was shot by Joe Marino, an American film-maker who went to Italy to shed light on the phenomenon of exorcisms. Accompanied by Padre Luigi, a true exorcist, Joe travels to the south of Italy, a place where the sacred and profane have always lived together, where Christian rituals are inextricably linked to the pagan ones.

Ahhh, found footage films. As soon as I see a jittering visage adorn my TV screen my mind mentally prepares itself for the tropes of this genre; long winded scenes interjected by the minimal thrill or scare. The Vatican Exorcisms, a “documentary” utilising the loosest of cameramanship, uses these tropes to their full effect (I don’t mean that in a good way), conveying what can sometimes be creepy and horrifying subject matter with little more than an off-kilter camera angle, a whish of solid story and scares, and a DVD cover that is completely and utterly misleading to what the film entails. That image never, ever shows up in the film. Never. 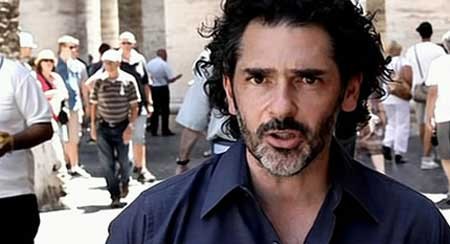 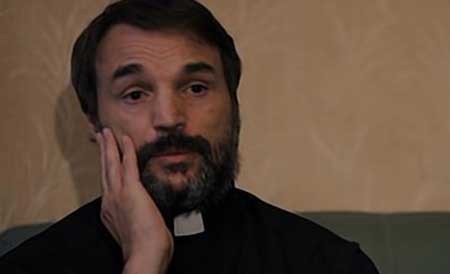 Let’s start off with the things that I liked about the film. The exorcisms weren’t your typical exorcisms we see in every other film of its ilk. They were gritty, low maintenance and low budget. The afflicted are not secured to beds or chairs. They don’t projectile vomit, sexually assault crucifixes or make objects move or explode, At most they might appear in two rooms at the same time or contort their body like a pretzel.

Now let’s move to the things I didn’t like about the film. The exorcisms weren’t your typical exorcisms we see in every other film of its ilk (yep…). They were so low key, they were… Well, boring. We have minutes and minutes of one possessed screaming and crawling around like a dog, minute after excruciating minute of an older possessed woman literally sitting on her bed. 5-10 minutes worth of this nail biting footage. Another was a child drawing, then turning onto her back and convulsing, then we had a human pretzel. It was not exciting at all. And the fact that they drag out these exorcisms only punctuates the tediousness of the scenes. Having a priest yell his words over and over is not thrilling or chilling. Less would have definitely been more here.

Camera work was too “found footage” considering this was meant to be a documentary. Not even the proper cameraman were able to hold a camera still or even focus properly. I dislike this technique when used in proper found footage films let alone one perpetrating as a documentary. Everybody I know in real life who holds a camera or uses their phone to shoot film always tries to get the best shot and hold it still for everyday footage, let alone a documentary. They don’t willing gyrate like a convulsing rhino on a washing machine. This trope of the genre is the biggest pet peeve of mine. Though The Vatican Exorcisms does keep the jittering to a minimal, it was still enough to bring me out of the illusion of the film. A documentary should never be that poorly shot.

Acting was stock standard and serviceable to the film. Nothing to gloat about, but nothing to really complain about either. Dialog spoken and actors all performed realistically and it helped try to cement the film into reality.

The story; think a very, very poor man’s The Possession of Michael King then lower your expectations another few notches. You can clearly see the intention and idea they had, but it is neither utilised nor realised so you are never truly scared or on the edge of your seat wondering what will happen next. You are on the edge of your seat wondering when the hell the exorcism stop… Seriously, I’ve been watching this old lady sit on her bed for like five minutes now and still nothing has happened…

There is a side(?) story of the main character Joe but it is so shallow and glossed over that its climax is underwhelming. More time should have been spent on this rather than saturating the runtime with monotonous exorcisms. Utilising this strand would have quickly and easily upped the scare factor. Case in point: at the first exorcism, Joe claims he sees a little boy, though no one else does… Not even us. The effect is lost because we didn’t even see what he saw. If we saw it too, and saw Joe react to him, then we were shown that no one else saw it, that would definitely send a chill up some people’s spine. Small things like this can easily and quickly up the thrills and chills but The Vatican Exorcisms does very little, if anything of this nature, save the dual room occupancy thing but that isn’t enough. 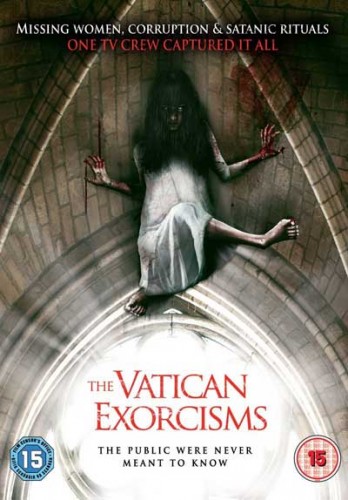 If I could use one word to describe The Vatican Exorcisms it would be underwhelming, un-climactic and uneventful… Damn it, that’s six words… I was never good at Geography…

1 out of 5 misleading DVD covers