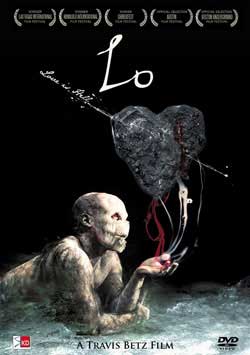 Love presents many challenges to couples…but none so daunting as the one Justin faces with his girlfriend April. Kidnapped by demons, April’s mystery begins to unfold when he finds an ancient book that she has left behind. Using the book, he contacts the demon Lo, ordering it to help him rescue his girl from the fiery pits. But Lo has other plans for his new master…dinner being one of them.

Justin thought playing with the supernatural would be a good thing. In his hands he has all the answers that he needs in the form of an ancient black arts book. In this book are the instructions on how to summon demons, namely one that calls itself LO. You see, Justin (Ward Roberts) was in search of a way to bring back his beloved April and dabbling in dark arts seemed to be the only logical choice for solution. When he does follow the book note by note, a hideous looking underworld dweller emerges slithering from the abyss ready to do his beckon call. This thing with its deformed appearance and snake-like crippled movements calls himself Lo but talks more like an old skat singer who smoked and drank a little too much. The demon in spite of being evil, is quite entertaining in his rather hip talking demeanor. When we get past his initial scary entrance, he is also quite comical. Torturing souls and burning flesh is just another day for the under dwellers, so he chats it up and invites a few guests in the process.

Justin also gets introduced to a few more of his friends. In fact the actual demon Jeez that took April explains that “she” is actually a demon in disguise that fell way to the ways of mortals. In short, she fell in love with Justin and forgot that her sole responsibility was to torment souls, eat people and inflict misery upon the damned. Jeez makes his point by adding some classic flair sung in “I love Lucy” song style with a whole band that is nothing short of surreal. As Justin begins to get some answers, it seems reality is slipping away a bit as the demons take control of his mental state. The demons do what they can to trick him into leaving the safety of his magic circle with all sort of lies. Justin though is determined to have Lo return his girlfriend so that he can convince her to come with him back to earth. We find out from flashbacks how Justin acquired such a book that is presented in a rather charming way.

Lo is done in a comedic tone that sort of reminded me of that Howie Mandel movie “Little Monsters”, though not entirely as it did have more horror elements than a kids show. The movies succeeds at bringing a highly original production that is layed out quite different in its own weird little way. In fact, most of the set is nothing more than a dark room with a spotlight on the magic circle and what comes near it. Out of the darkness, a few hellish contributors emerge to indulge and tempt Justin but despite all of this he stays pretty focused. The movie was written and directed by Travis Betz who created the 2006 Fangoria produced film :Joshua” . The film stars the lovely Sarah Lassez who you also might remember from the film “Mad Cowgirl”.

Lo succeeds in bringing a simply shot, simple concept based film that is quite entertaining. I think its weird little dream like qualities keeps it from becoming stale and in many ways also very PG. In fact, the horror elements are limited to some well done made up demons who despite being demons are more comical than horrific. In the end, Lo is a love story about an impossible situation and what one will do even at the cost of entering hell to rejoin his loved one. 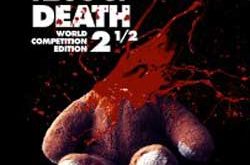