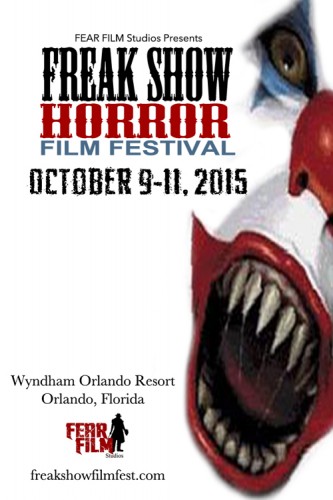 “I still can’t believe it’s been 10 years!” states Executive Director Robert Massetti. “We plan on making our 10th year the best year ever and I hope all the fans of independent horror will join us.” The festival has a new home at the Wyndham Orlando Resort and hopes to grow even more. “The Festival wants to celebrate the art of filmmaking and expose audiences to new independent horror films from around the world. We hope that this new venue will help us accomplish these goals”.

Dates for the FREAK SHOW Horror Film Festival are October 9-11, 2015 at the Wyndham Orlando Resort with festival passes going on sale this summer.

Filmmakers! You still have time to submit your film to the Freak Show Horror Film Festival. Deadline for entries is May 11, 2015 with discounted submission fees. For official rules please visit our website at freakshowfilmfest.com.

Named one of MovieMaker Magazine’s 20 Coolest Film Festivals! The FREAK SHOW Horror Film Festival is a horror genre film festival founded by FEAR FILM Studio’s owner Robert J. Massetti that dedicates itself to the promotion and support of independent filmmaking.