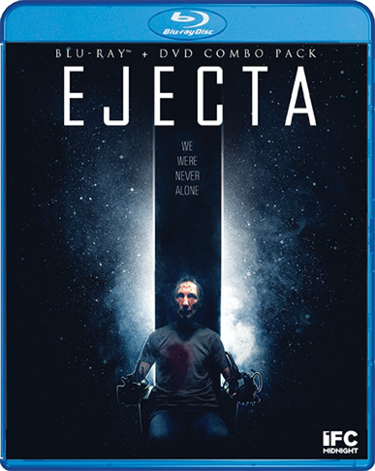 Bill Cassidy, alias Spider Nevi, blogs about an alien abduction and attracts the attention of a documentary filmmaker named Joe Sullivan. While in the interview process, Bill and Joe see inexplicable phenomena in the sky before a monumental solar ejecta. They must soon flee through the woods, as they have witnessed the arrival of a hostile alien being.

Harry Dean Stanton look alike Julian Richings plays Bill Cassidy, also known as Spider Nevi, a semi famed, off the grid, totally mysterious writer of an alien blog who has trouble sleeping, and strange emotions, and who’s tried everything to make himself less disturbed, but nothing works. Bill remains perpetually haunted–not from being abducted by aliens, per se–but from having “met . . . an . . . advanced . . . life form . . . from . . . somewhere . . . else . . .” 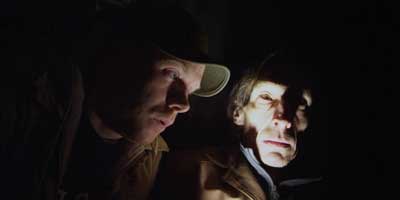 He’s also the captor of a mysterious organization. Government? Military? CIA? Freelance conspiratorial interrogators? Whoever they are they have Infrared goggles, and shitloads of other goodies, like a device which extracts thoughts directly from your brain. They want to know what Bill knows about E.T.I. And Dr. Tobin, who thrives on this sort of thing, has got all day. She will do whatever it takes, she’s ruthless like that. By God, though, Bill’s not telling her jack squat.

Documentarian Joe Sullivan, apparently, is a major admirer of Bill’s, or shall we say, Spider Nevi. Joe plans on making a documentary film about his (devastating) experiences. On the way to meet him he practices introducing himself. (Uh, sorry, Joe, the guy’s not exactly Elvis.) He also draws the chagrin of an overall-wearin’ hillbilly who don’t care too much for bein’ filmed. Surviving Jed Clampett’s verbal abuse, Joe meets Bill, and films him talking about his dreaded experience with the aliens. In case you were wondering, they really $%#-ed up his $#*%. 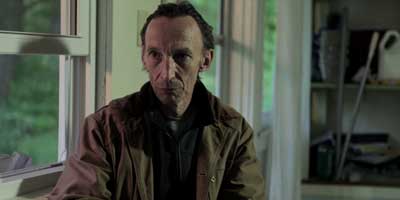 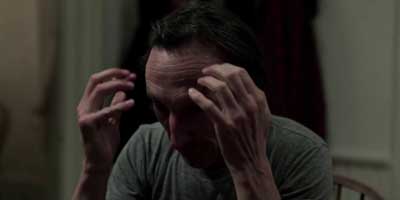 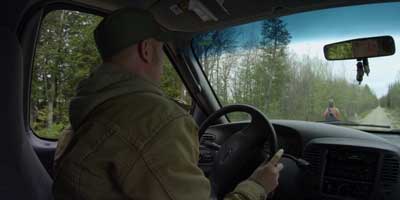 Joe thought it would be a good idea to stage the interview around a historic astrological event: an ejecta storm. So, while Bill and Joe are sitting on Bill’s porch, and Bill is droning on about how disturbed he is on account of the aliens, they witness something far more phenomenal than the storm. An alien ship rips through the sky, crashing and burning to the ground. The arriver, though, isn’t going to be flying around on your bike with you. This one is hostile. Really, really hostile. That’s where it turns from a sci-fi movie into a sci-fi/horror movie. Because things transition into a desperate chase through the woods for Bill and Joe . . . . and something truly awful awaits the rest of humanity.

EJECTA tells a three-tiered story. The first tier: Bill had one hell of an experience with those aliens. Poor guy, living a life of dread and restless paranoia like that. What doom and gloom he speaks of. The second: Now, Bill, you’re going to tell us what you know. We’ve got some high-tech device to get the information out of you. 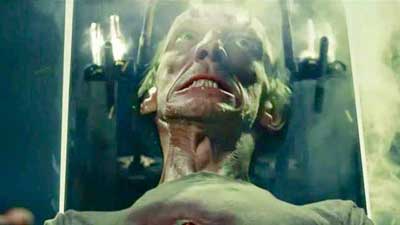 I felt like they were skimping on those. Same goes for Bill’s mugging, melodramatic monologues. And Joe talking about how he’s about to go interview Bill before he actually goes and interviews Bill.

And this, a vague, BLAIR WITCH PROJECT-type alien flick, rife with overacting and found footage cliches, from the same guy, Tony Burgess, who wrote PONTYPOOL? In the words of Biz Markie: “Come ON.”

Ejecta is now available on bluray per Shout Factory