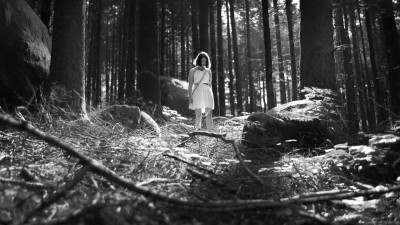 The Forest of the Lost Souls is a dense and remote forest, Portugal’s most popular place for suicide. In a summer morning, two strangers meet within the woods.

Ricardo (Jorge Mota) is a sad old man, who gave up on life when his older daughter, Irene (Lilia Lopes), took her life in a romantic pact gone wrong in the glacier lake that rests hidden deep in the forest.

Carolina (Daniela Love) is an eccentric, unstable young girl who finds all things related to death are fun.

As bumping into each other puts them off killing themselves, they decide to go for a walk to discover «The Forest of the Lost Souls» and see what they will find. As they walk deeper into the woods, they get to know each other and become friends: but one of them is not being honest, one of them is a dark and horrible person.

Imagined like a matryoska doll,  The Forest of the Lost Souls» (A Floresta das Almas Perdidas) is an unsettling horror tale inside of a coming of age drama, with a poetic drama about life giving away into a suspenseful “70s slasher-style” second act.

Shot in a beautiful and haunting black and white in Northern Portugal and in the Sanabria Glacier Lake in Zamora (Spain). Production took place in late 2014 and early 2015.

The Forest of the Lost Souls» is being produced by Anexo 82, a production company based in Oporto (Portugal), with the support of several institutions. Post-production will take place at the 2003 Studio in Dubai (UAE).

The film will be the directional debut for José Pedro Lopes after a long carrer as a producer and director of short films. The cast , lead by 22-year old Daniela Love who has a background mostly in theater, counts with Jorge Mota, Ligia Roque, Mafalfa Banquard and Tiago Jácome.

Tags The Forest of the Lost Souls