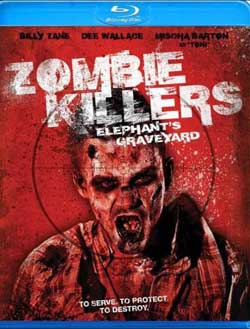 A young militia is all that stands between a horde of zombies and their rural town that’s been decimated by the fracking industry.

Although I’m pretty sure that there’s been at least 5 new films featuring zombies in them already released this year, Zombie Killers: Elephant’s Graveyard is the first one I’ve seen in 2015. As we all know (or should know anyway), January/February are pegged as the months when studios clear off their shelves and release a bunch of crappy movies to unsuspecting audiences. So I basically keep my expectations on the low side for every film I see in these two months. Sometimes I find myself happily surprised (Everly) and sometimes I find myself praying for death (Fear Clinic), but this one sorta lands in purgatory – not too good, but not awful either.

A virus has reanimated the dead and they’ve pretty much overwhelmed humanity worldwide. But the inhabitants of a small town called Elwood have managed to not only survive, but thrive in the face of unimaginable terror. This is partly because it’s situated far from the beaten path and because the townsfolk have a small group of elders that have instituted routines to keep everyone safe. A fence has been erected around the town, and although it’s fairly flimsy, it does its job. The town also has a group of young adults that call themselves “Zombie Killers”, and they protect the town from any zombie mayhem. They’re trained by Seiler (Billy Zane), and practice zombie killing techniques by playing paintball (!). The town isn’t all that different from any other rural town that you might encounter. It’s populated by the same cookie cutter characters you’ve seen in dozens of other films and even has a religious fanatic (Felissa Rose), who is convinced that the zombie apocalypse has been brought down by god to punish humanity for its bad behavior. We also have the sweet, but sickly, grandmother (Dee Wallace), The genial doctor (Brian Anthony Wilson) and the pregnant ingenue (Mischa Barton) amongst the standard townsfolk. The town elders believe that a local fracking operation is responsible for compelling the undead to descend on the town (although I never really understood the logic behind why they believe this), turning it to an elephant’s graveyard as they wipe out the town. 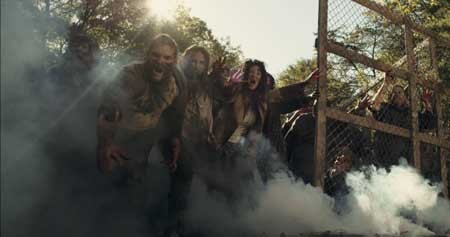 As I previously mentioned, the grandmother is sick (with cancer), and her son has to tend to her needs while he goes through feelings of insecurity with his girlfriend. The religious fanatic (& her followers) aren’t too happy and the pregnant woman’s unborn child might be the key to saving what’s left of mankind. Additionally, questions are being asked about the town elders proclivity to exile various members of the town when they don’t do what they’re told to do. You can see that there’s a whole lot of drama to be found here in the sleepy hamlet of Elwood, but this is a movie about zombies isn’t it? So where the heck are they? Well, There’s also a literal army of zombies slowly shambling towards the town (I’m talking tens of thousands of them), but they don’t seem to be on the mind of many people for much of the films running time.

And herein lies the problem with the movie. So much of it is spent reveling in the drama going on in Elwood that it forgets all about the zombies until very late in the film. I’m pretty sure this is due to a very low budget, but I’ve seen other zombie films that had much smaller budgets than this one, and they managed to put some decent zombie carnage up on the screen. Then again, I’m not too sure if writer/director Harrison Smith really wanted to make an all out zombie flick. I say this because despite its overall lack of zombie mayhem, Zombie Killers: Elephant’s Graveyard is a fairly compelling little movie. It moves quite slowly, but there’s a deliberate pace that’s set by Smith which works to allow the viewer to develop relationships with all of its characters. As a matter of fact, the film looks and feels like an extended episode of AMC’s The Walking Dead – and that’s not a bad thing. But it is being billed as a zombie flick, and as there is very little zombie action to be found here, the film suffers.

Some of the dialog is stilted, but the performances are on point. I really enjoyed watching Zane subtly chew up scenery throughout the film, he knows how to command a scene even if he isn’t the focus of it. The film also looks really good and there are a few nifty overhead shots that highlight both the beauty of the scenery and the immense size of the zombie army headed towards the town, pretty decent score here as well. But the film’s stubborn insistence in focusing on the people of the town really deaden the proceedings, and once the zombies do finally arrive – it’s far too little and way too late to make much of a difference. Additionally, the film is relatively gore free with little to no flesh rendering to be found. And while this isn’t a crime, it’s still a film about zombies – there oughtta be some gut munching to be found somewhere. A lot of the shooting that the Zombie Killers do is at targets that are off screen, so we don’t see too many casualties of the conflict either. 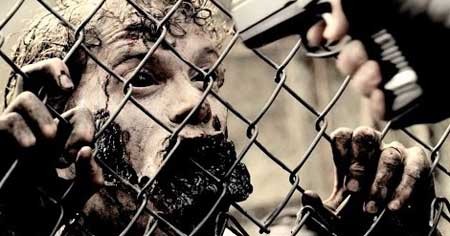 But the film really makes a mistake with its depiction of zombie wildlife. At various times the cast is attacked by zombie fish, zombie deer and zombie wolves. The CGI used in depicting the animals is among the worst CGI ever committed to celluloid, I mean it’s heinously bad. It looks to be on the level of the CGI used in the Birdemic saga, and that ain’t good. Oddly enough, the CGI used to simulate the massive horde of zombies approaching the town isn’t too shabby (as long as you don’t look too closely). Why the production chose to go with these terrible images rather than just excise them from the script completely is beyond me. They add absolutely nothing to the film, and only serve to highlight the obvious low budget.

But I did find most of the film to be fairly compelling, and I wasn’t expecting that. I was expecting a film full of zombie related shenanigans, and instead got a film that focuses on the story of the people in the zombies path – and I really didn’t mind that as much as I thought I would. If you decide to watch Zombie Killers: Elephant’s Graveyard expecting a gory action film, you’ll be sorely disappointed. But if you keep your mind open and allow the plot to develop, you might enjoy yourself. And while I can’t sit here and say that I loved the film, I’m not gonna crap all over it either, I liked the characters here.

So proceed with caution…