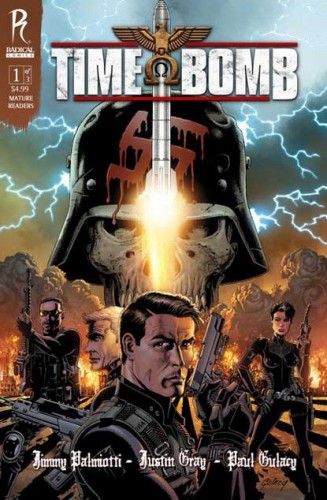 New series “Time Bomb” from Radical Publishing takes on quite a few genres. Science Fiction, horror, action and war. Add to that bunch a Nazi conspiracy looped within a government conspiracy and you have a taste of time bomb.

The military is doing what they do best…which is uncover secrets while they dabble in underground bunkers. When a team uncovers something they weren’t expecting such as a hidden underground Nazi base, they call in some experts to take a look. Well those nasty nazis have a few plans for the future which includes the release of a global virus that could end mankind.

Good thing our “experts” were there to set it off by accident. The effect is devastating causing all kinds of chaos on the world above. In fact it’s a good segue to creating walking diseased zombie folks who’s skin begins to melt off. Ok, well if that isn’t enough, old cover ups come back into the picture which in this case includes time travel or time dabbling.

4 are picked to go on the journey which in short includes being sent back to put a stop to this before its released in the future. The technology is untested at best and may include a few quirks. Though mankind is doomed to exterminate, so the reluctant 4 have really not much choice than to agree. As you can tell by this quick introduction that alot is at stake and alot is to be unveiled. This issue which is one of 3, really sets the mood for a sci-fi thriller that also happens to blend in modern times. It’s also apparent that nazis will have a big role in how this plays out which looks to be some pretty dynamic stuff.

The issue features writing by Jimmy Palmiotti and Justin Gray with artwork by Paul Gulacy. The art has a clean feel to it that differs from some of the more extreme styles in other series by Radical. But none-the-less, it really works for the kind of story they intended and is a nice mix of content!