Freestyle Digital Media (FDM) has announced January 6th, 2014 as the DVD release date for MISSIONARY. The film was released on VOD in October 2014. 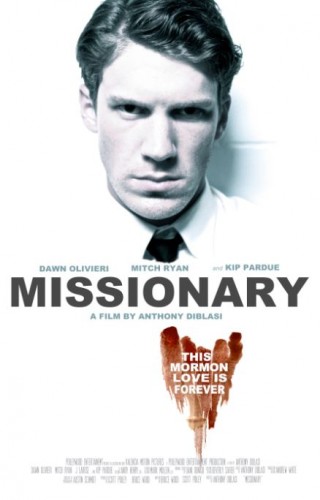 The film received rousing reviews from critics after a premiere at Fantasia International Film Festival, noting its relatable characters and intense level of gore.

Katherine Kingsmen (Olivieri) is a struggling mother trying to create a better life for herself and her son. Her marriage hits the rocks and she engages in a fling with Kevin Brock (Ryan), a Mormon missionary with a troubled past. But, Katherine opts to save her marriage and, inevitably, Brock’s obsessions and insanity take over.  Elder Brock can’t accept that the relationship is over, and he will stop at nothing to prove to Katherine that they are destined to be together by God’s will.

Freestyle Releasing partnered with The Orchard to distribute MISSIONARY to cinemas. The film was co-promoted through The Orchard partnerships with Shock Till You Drop (a division of CraveOnline), and Evolve Media.