Bloody Bill Compton was spotted in London to mark the Blu-ray & DVD release of True Blood: The Final Season this Halloween 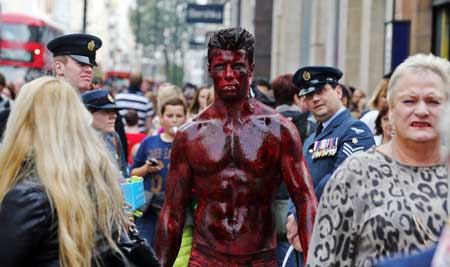 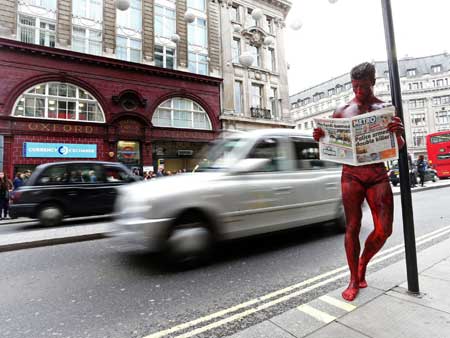 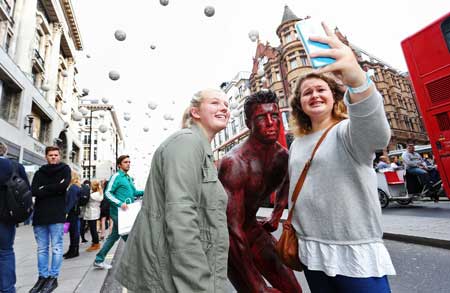 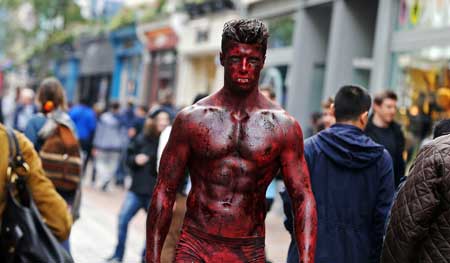 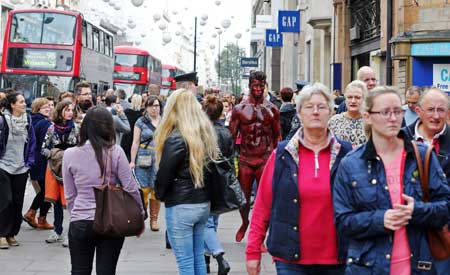 TRUE TO THE END

The complete final season and individual episodes are also available to own and watch instantly on Amazon Instant Video, blinkbox, Google Play and iTunes. This year, the spell-bindingly addictive TV series from Emmy® and Oscar® winning creator Alan Ball (Six Feet Under) comes to an end. Drawn from the meticulously crafted world of novelist Charlaine Harris, you can now say a final farewell to Sookie Stackhouse (Anna Paquin; X-Men) and the supernatural beings living within Bon Temps, Louisiana.

The COMPLETE SEVENTH SEASON bangs the final nail in the coffin as Sookie, Bill and Eric battle to end the Hep-V virus once and for all. Mixing romance, suspense, mystery and humour, TRUE BLOOD takes place in a world where vampires and humans co-exist, revolving around waitress Sookie – a telepathic human-faerie hybrid known as a Halfling. Sookie is a waitress at Merlotte’s, owned by shapeshifter Sam Merlott (Sam Tramell; The Fault in Our Stars) in the small Louisiana town of Bon Temps. A huge array of characters appear throughout the series including Bill Compton (Stephen Moyer; The Double), a 173 year-old vampire who changes Sookie’s life forever after they meet in Merlotte’s one evening; Tara Thornton (Rutina Wesley; California Winter), Sookie’s tough-talking but insecure best friend, Sookie’s womanising brother Jason (Ryan Kwanten; Home and Away); the thousand year old vampire and Sherriff of Area 5 Eric Northman (Alexander Skarsgard; Battleship) and Lafayette Reynolds (Nelsan Ellis; The Help), a short order cook, drug dealer, road crew member and medium.
The series explores several contemporary issues, including the struggle for equal rights, discrimination and violence against minorities and homosexuals, the problems of drug addiction, the power of faith and religion, the power of the media, the quest for identity and the importance of family.

Packed with more shocking, scary and sexy moments than ever before, the final season ties up the TRUE BLOOD addiction… but as always, leaves us thirsty for more!

Goodbyes might suck, but Trubies can also enjoy the jam-packed extra content, including True Blood: A Farewell to Bon Temps, True Death: The Final Days on Set, as well as hours of commentary with the cast and crew. TRUE BLOOD: THE COMPLETE SEVENTH SEASON and THE COMPLETE SEASONS 1-7 BOXSET are must-have additions to all Blu-ray and DVD collections – whether you’re an existing fan or new to the show, here’s your chance to get sucked into the True Blood fantasy.

Following six thrilling years of the phenomenon that is TRUE BLOOD, HBO Home Entertainment releases TRUE BLOOD: THE FINAL SEASON on Blu-ray and DVD on 10th November 2014. New fans of the series will also be able to catch up on the sexiest, sleekest show from the very beginning with the release of the  COMPLETE SEASONS 1-7 BOXSET.