NORMAN IS A TYPICAL EIGHT-YEAR-OLD BOY.  EXCEPT FOR BEING A PSYCHOPATHIC KILLER THAT IS.

Coming next March 2015, Titan Comics brings you a new horror/comedy graphic novel series NORMAN by Stan Silas – which follows the adventures of an a eight-year old psychopathic killer! 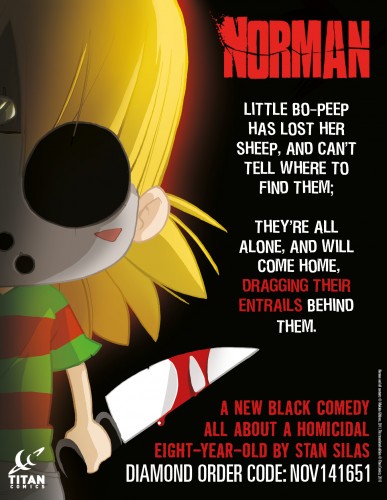 “I AM EIGHT YEARS OLD AND I KILL PEOPLE.”

A Is For Arterial Spray! B Is For Blood-Soaked! C Is For Corpses!

Eight years old. Blonde-haired elementary school psychopath. Looks so cute while burying his eviscerated friends in the sandbox. With humor as black as dried blood, Norman looks set to join the padded-cell pantheon of murderous lunatics – and this time he’s bringing his lunch money!