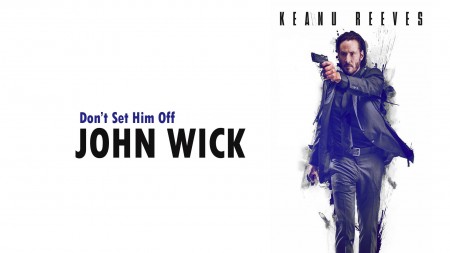 SYNOPSIS
An ex-hitman comes out of retirement to track down the gangsters that took everything from him.

REVIEW
John Wick, the latest action film from Keanu (The Matrix) Reeves, is a bizarre mix of Pulp Fiction, Deathwish, Lethal Weapon and Scarface. But not. The film is very similar to a very many action and gangster film that proceeds it; yet, it becomes something very much of its own identity. The film is gory, violent, action packed and, at times, hilarious. The script fills its world with a plethora of characters, locations, situations and its own set of rules. It easily steamrolls over realism and physics evolving into a hyper-stylized cartoon world of revenge and death. The dialog is sparse and campy, the action is extreme and in-your-face, the characters are broad and excessive in the best way possible. Reeves is at his best joined by a long list of supporting character actors: Michael (Girl with the Dragon Tattoo) Nyqvist, Alfie (Game of Thrones) Allen, Willem (Anticrhist, Spider-Man) Dafoe, Adrianne (G.I. Joe: Retaliation) Palicki, John (Land of the Dead, Kick-Ass 2) Leguizamo and Ian (American Horror Story: Asylum, Deadwood) McShane, just to mention a few. John Wick is destined to become a cult classic.

Spoilers: The story of John Wick smartly sets up the film without telling its audience anything about John Wick’s past outside of his immediate narrative, his here and now. His wife has recently passed away and John is having difficulty dealing with her passing. Drowning in sorrow and grief, John receives a bright light of hope when a package arrives from his wife arranged long before succumbing to the disease that took her life. It is a puppy, something John is ill equipped to take care of but desperately needs to move on. At this point the audience is wholly invested into John’s plight and journey then everything is sent into a violent hellstorm of history, death and revenge. A chance encounter with Iosef Tarasov, the spoiled son of a Russian mob boss, leads to John losing everything dear to him and every chance at a normal life as they beat him, steal his car and kill his dog. As John vows for revenge, the story reveals Wick is a retired hit man for the Russian mob known as The Boogeyman. The very mention of his name instills fear and what follows goes out of its way to illustrate exactly why this is so in a whirlwind of gun-play and bloodshed.

In a world strangely devoid of the normal society, John Wick leads its audience into a mob filled underworld where a hotel, The Continental, is set up as a safe zone, where hit men, mobsters, gangster and other questionable occupations can mingle and breathe without concern. John, of course, checks in announcing his return to the fold never hiding his intent. Iosef’s father, mob boss Viggo Tarasov places a two million dollar price tag on Wick’s head, upping the ante and the body count. Viggo even goes as far as to break the hotel rules, doubling the amount if the assassin will ignore the Continental’s guidelines. Outside these few interesting tidbits and broad stroke world-building colors, John Wick is focused on one thing, its lead character shooting his way through every obstacle until he reaches his goal Iosef Tarasov and his father. “Tell me where he is, ” John demands of Viggo, “or die screaming by his side.” It matter little that John is currently tied to a chair, held a gun point, at that very instant. 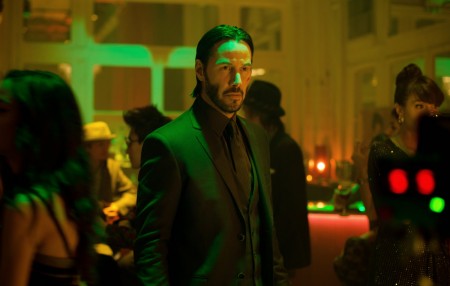 Keanu Reeves brings a quiet controlled chaos to the role of John Wick in one of his best films in years. The character is quiet, his actions, however, are noisy. It is not the most demanding of roles but it does provide Reeves with brief opportunities to emote, especially early on, or to reflect a conflicted scowl or two. “People keep asking me if I’m back. Yeah. I’m thinking I’m back.” is about the extent of his dialog. Not the most challenging, in fact, most of his conversations result in his literally repeating what his opponent just said. Which is oddly and unexplainable kind of fun. This is a physical role and Reeve brings it. Once he is unleashed, he is exactly how everyone else in the film describes him, an unstoppable force of violence and mayhem. Wick never asks questions, he shoots first – and then shoots again mastering the art of the double tap. He never gives his target an opportunity to banter or parley. Bang! Dead. Blam! Done. Move on. John Wick is definitely who you would want at your side during the zombie apocalypse, nothing will stop him. John Wick is the closest thing Reeves will get to a Tony Montana role and he owns it, lock, stock and barrel. 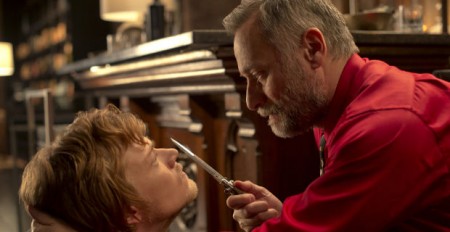 In addition to abundance of action and brutal mayhem, John Wick also provides an unusual blend of comedy with surprising cameos and and entertaining supporting cast. The poop-their-pants reactions from characters as they learn who has been awakened from the slumber of retirement is priceless. The odd descriptions of Wick as the Boogeyman are hilarious in the to-the-point delivery. “One time, he killed three men in a bar with a pencil. With a pencil.” Viggo explains to his son. Then the film goes out of its way to reinforce who John Wick is visually over and over again. John Wick is wicked quick and precise. Blam. Pow. Snap. Crunch. No words needed. Just guns, knives, fists, cars and few explosives. Between all the chaos, there is the cast scattered amongst the corpses and dying mobsters. Willem Dafore as Marcus a fellow assassin. Adrianne Palicki is a killer with no respect for authority. Ian McShane is the owner of The Continental and Lance Reddick is the Hotel Manager. Every turn, every reveal delivers a smile. The film is bathed in this indescribable energy, deranged wit and Sapranos-infused violence.

John Wick is a beast. It is a unique blend of complexity and simplicity, camp and high action, gore, emotion and violence. It is a revenge film. It is a gangster caper. It is a comedy and a character piece. It is a great time at the theaters for action fans. Directors David Leitch and Chad Stehelski deliver a modern classic action film with a unique style and an unusual focus and drive. Screenwriter Derek Kelstad provides a script with a terrific set up and a brilliant pay off with a tone to its dialog that counterbalances the action and violence. Keanu Reeves is perfect as John Wick creating a character that will live eternally along side Neo, Jack Travern and Johnny Utah. The supporting characters are perfectly cast. John Wick is a buddy picture, not on screen, but in the audience – it should be experiences with as many friends as possible.