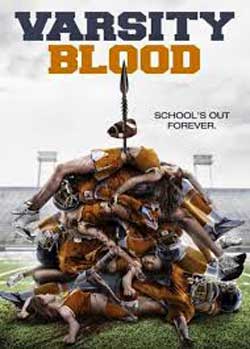 A pack of small town jocks and cheerleaders with a dark secret head out to a remote farmhouse for a raucous Halloween pasture party, only to find themselves up for slaughter by someone dressed as their high school mascot, an Indian warrior wielding a lethal fighting ax and a bow and arrow.

I consider myself to be a child of the 80’s, and I’m proud to say that I’ve seen pretty much every 80’s genre film there is to see (Although there are a few nagging omissions). So when I sit down to watch a film that’s a purported Homage to the slasher films of that venerable decade, then I expect to see lots of nubile young teens, stupid jocks, parents that haven’t a real clue as to what they’re kids are doing and some sort of masked killer with a hidden agenda that doesn’t get revealed until the penultimate moment of the film. Writer/Director Jake Helgren pretty much hits every single one of these tropes in his latest film, Varsity Blood, but poor execution, acting, cinematography & scripting left me feeling fairly cheated at the end.

Stop me if you’ve heard this setup before, it all starts out with a group of varsity cheerleaders & their dumb jock boyfriends who want to do something especially spooky to celebrate Halloween. The new girl in town, Hannah (Lexi Giovagnoli) is readily accepted into the group, but she’s left unaware of a dark secret her new found friends are keeping from her. Mainly that the principal’s daughter was murdered a year ago on Halloween night, but they let her in on it eventually. With the teens (& I’m using that term lightly since they all look to be at least 25 years old), disregarding the principal’s creepily prescient pep rally address, they embark on a evening trip to a secluded cabin in the woods, from which they cannot contact anyone, and start drinking and having sex. But there’s someone carrying both a large ax and a bow & arrow lurking in the woods. And he has a bone to pick with these “Teens“. 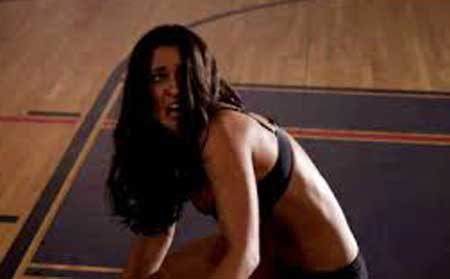 You guys didn’t stop me, but I’m pretty sure this story line isn’t gonna strike anyone as being either unique or ground breaking. But in the hands of a better director, it might’ve been entertaining, sadly it isn’t. What it ends up being is a slow, dull, pedantic and rote exercise in tedium, with the occasional dollop of gore strewn in to wake you up. None of the characters herein do anything that you haven’t seen before. They don’t say anything that you haven’t heard before. The kills are nothing that you haven’t sat through in about 1000 other films either. As a matter of fact, there isn’t one single solitary dollop of ingenuity on display here. But I didn’t really expect there to be either, I knew it was a homage to slasher flicks from the 80’s I was about to watch, and I pretty much knew what to expect as well. I was just hoping to be wrong for a change. 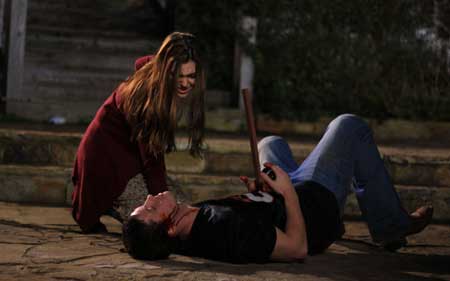 Helgren wrote last year’s Bloody Homecoming, another 80’s homage. While that film was no great shakes, it was entertaining & had a few choice moments of sex/violence that harkened to another era. Tellingly, he didn’t direct that film (Brian C. Weed did), and the difference is immediately evident. Weed’s film had some life to it, it was fairly bright and featured a few good performances. It did what it was supposed to do. Varsity Blood is as dull to look at as it is to sit through. It’s colors are washed out and the polar opposite of vibrant. Now maybe this is the look Helgren was looking for, but when you light your nighttime scenes so dimly that the 2nd half of the film is virtually unwatchable…then you’ve been looking for the wrong thing.

When you gather a group of actors that couldn’t act their way out of a high school gym locker, you’re kind of out of luck as well. Add the terrible cinematography, script & acting together and what do you get? A supposed slasher film that does absolutely nothing to scare its audience. The one bright spot in the film is the always excellent Debbie Rochon as Hannah’s mom, Nancy. But even an actor of Ms. Rochon’s caliber has a hard time giving the lines she’s stuck with much gravitas. The other actors on display really aren’t worthy of much mention, they’re all just a group of adults, pretending to be teens for 90 minutes in the hopes that there’s a decent paycheck waiting for them when they hear “It’s A Wrap“. I honestly believe that Mr. Helgren doesn’t have any idea on how to stage a feature film either. His setups display no imagination, no desire to get anything but the bare minimum on film in order to get the whole experience over with. And don’t even get me started on the mask/outfit the killer wears, its extremely reminiscent of a villain I remember seeing on Scooby Doo. Jinkies!!

You would be wise to avoid Varsity Blood if you’re looking for something entertaining to watch. But you’d be even wiser if you decided to rent it in order to help you get a good night’s shuteye. It’s an excellent sleep aid. Proceed with caution.