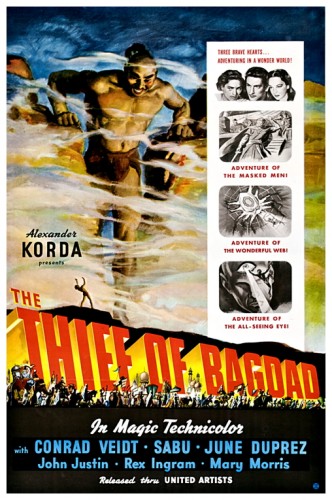 “Prince Ahmad is the rightful King of Bagdad but he has been blinded and cast out as a beggar. Now a captive of the wicked Grand Vizier Jaffar he is cast into a dungeon where he meets Abu, the best thief in all Bagdad. Together they escape and set about a series of adventures that involve a Djinni in a bottle, a mechanical flying horse, an all-seeing magic jewel, a flying carpet and a beautiful princess.” (courtesy IMDB)

The great Hungarian filmmaker Alexander Korda, hailed as the savior of the British movie industry during the thirties, produced in India a Rudyard Kipling story called Elephant Boy (1937), directed very naturalistically by Robert Flaherty with a largely native cast. The title role was played by a young stable boy named Sabu, and the film propelled the lad to instant stardom. Korda then quickly cast Sabu in a lavish colour production of an A.E.W. Mason story about a young Indian prince who has learned army drum signals to warn the British regiment of a treacherous attack. The Drum (1938), released in the USA as Drums, was an enormous success, but Korda wanted to expand Sabu’s usefulness by moving away from Kipling. What would be more natural for the Indian teenager than the eye-popping wonders of the Arabian Nights?

Inspiration sometimes strikes at unusual moments. I was at a banquet at London’s Savoy Hotel following the premier of The Drum, and I happened to be seated between Korda and Douglas Fairbanks Senior, who had a huge hit with the silent fantasy The Thief Of Bagdad (1924). I whispered to Korda, “Hey Alex, why not remake Thief Of Bagdad using an entirely new story and scaling down the title role – so to speak – for young Sabu? The romantic interest could be provided by an exiled young king who befriends the boy thief…” Korda immediately asked to buy the rights to the title, which Fairbanks owned. Fairbanks agreed on the spot, I went back to looking for the drinks waiter, and Korda spent the next two years constructing an epic fantasy. 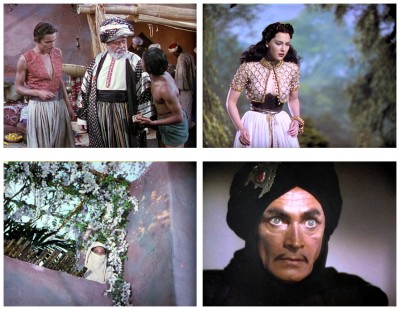 Korda felt strongly that international audiences would react against the grimness and uncertainty of the thirties by turning to themes of romance and escape: “When motion pictures became talkies the world’s greatest medium of entertainment suffered a tragic loss. Sound came in with a roar, and the imaginative beauty of the screen, with its unlimited magic sweep of movement, died out. Since the talkies came, fantasy has been virtually unknown on the screen. The Walt Disney cartoons have kept it alive almost alone. In the excitement over Disney’s successes, most of us forgot that he was teaching us a lesson.” The lesson was not lost on Korda. He and his staff worked for two years at his Denham Studios outside London, creating the city of Bagdad and the busy seaport of Basra in all their glory. Temples, markets, palaces, harbours, galleons, oriental settings of colourful enchantment gorgeous enough to rival any Disney studio animation.

Korda was equally fortunate in his choice of cast. He selected John Justin and June Duprez as dashing lover and fragile princess. Rex Ingram, who had made a great impression as De Lawd in Green Pastures (1936) and as runaway slave Jim in Huckleberry Finn (1939), plays the wildest role of his career as the big genie who billows out of a small bottle. As the villain Korda chose Conrad Veidt, the distinguished German actor who brought to his role of the evil Grand Vizier all of the dark sinister intensity of his great days at the height of UFA‘s expressionist horror cinema. Veidt’s portrayal of Jaffar as a demonic force is so strong that it’s easy to believe he could conjure up black spells and storms at sea. He is quite superb, a dramatic presence that lingers long in the memory. The screenplay is also unusually good, even poetic, and one of the very best examples of fantasy put into words. The script was the work of character actor Miles Malleson who, for decades, played a series of lovable old eccentrics, and can be seen in this film as the doddering old Sultan. 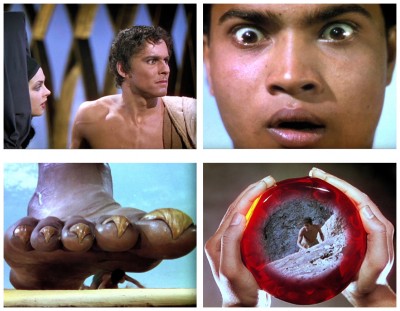 The Thief Of Bagdad (1940) had three directors during the two years of its making. One of them was Michael Powell, who went on to direct many more imaginative films, from The Red Shoes (1948) to Peeping Tom (1962). Hungarian composer Miklos Rozsa wrote the music, lush and fantastic, often barbaric with a touch of the Orient, but always sweeping and resplendent, underscoring the magic of the film itself. A major contribution, of course, is the work of special effects genius William Cameron Menzies, the American who had directed Things To Come (1936) and was responsible for the incredible sets seen in the original silent version of The Thief Of Bagdad. The visuals are certainly lavish, but were extremely difficult to produce, doubly so because of the use of Technicolor, and remains a testament to the greatness of Menzies and co-producer Vincent Korda.

After two years of shooting at Denham Studios, World War Two erupted in Europe. The picture was to have been completed in Africa, but conditions made this impossible, so Korda moved the entire company to Hollywood and shot the sequences originally intended for Africa in the Grand Canyon and the Painted Desert. Other sequences had to be re-shot in Hollywood, and many of the massive Denham Studios sets rebuilt, because young Sabu had grown alarmingly during the two years the film was being made. Sabu had started the epic as a boy but, by now, had filled out to young manhood, and early scenes simply had to be redone. As in the original Arabian Nights, the film’s story is told in flashback. Ahmad (John Justin), the naive King of Bagdad, is convinced by his evil Grand Vizier, Jaffar (Conrad Veidt), to go out into the city disguised as a poor man to get to know his subjects. Jaffar then has Ahmad thrown into a dungeon, where he is joined by the young thief Abu (Sabu), who arranges their escape. 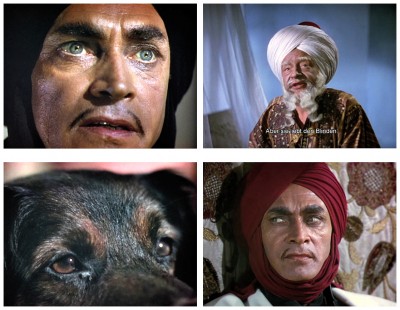 They flee to Basra where Ahmad becomes acquainted with its Princess (June Duprez), who is so beautiful that no man can look upon her, however Jaffar is also on his way to Basra intending to marry the Princess. Her father the Sultan (Miles Malleson) is fascinated by the magical mechanical flying horse Jaffar offers him and agrees to marry off his daughter. The Princess, now deeply in love with Ahmad, disobeys her father and runs away, while Jaffar magically blinds Ahmad and turns Abu into a dog. The spell can only be broken if Jaffar holds the Princess in his arms. The Princess, unrecognised by the general populace, is captured and sold in the slave market. She is bought by Jaffar and taken to his mansion, but she falls into a deep sleep and cannot wake her. Ahmad is tricked by Jaffar’s servant Halima (Mary Morris) into waking up the Princess, then lures the Princess onto Jaffar’s ship which immediately sets sail.

Jaffar tells the Princess about the spell, so she allows herself to be embraced, whereupon Ahmad’s sight is restored and Abu is returned to human form. They chase after the ship in a small boat, but Jaffar conjures up a storm to shipwreck them. Abu wakes up alone on a deserted beach and finds a bottle. When he opens it, an enormous genie (Rex Ingram) appears. Understandably upset at being imprisoned for so long, the genie threatens to kill his rescuer, but Abu tricks him back into the bottle. The genie then promises to grant Abu three wishes if he will let him out again. The hungry boy uses his first wish to ask for sausages then, when Abu demands to know where Ahmad is, the genie flies Abu to the top of the highest mountain in the world. On it sits a temple containing an enormous statue with a large jewel set in its forehead, the All-Seeing Eye, guarded by a giant spider. Abu is told that the Eye will show him where to find Ahmad, and has to fight off the huge arachnid while climbing the statue and steals the gem. 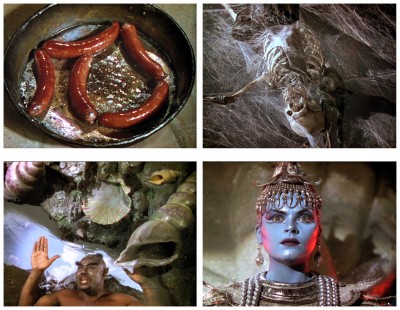 Jaffar refuses to magically bind the Princess to his will as he genuinely wants her to love him, but she both fears and hates him. The Princess pleads with him to return her to Basra, and he does so willingly, where she begs her father not to force her into marriage, and the Sultan agrees. Furious at the Sultan for breaking his word, Jaffar presents him with another mechanical toy, a dancing statue of the multi-armed Krishna, which kills the Sultan. The genie then takes Abu to Ahmad and, when Ahmad asks to see the Princess, Abu has him gaze into the All-Seeing Eye. Ahmad despairs when he sees Jaffar arranging for the Princess to inhale the fragrance of the Blue Rose of Forgetfulness, which makes her forget her love. Ahmad lashes out at Abu for showing him the scene and, during the ensuing argument, Abu unthinkingly wishes Ahmad to Bagdad.

The genie, freed after granting the last wish, abandons Abu alone in the wilderness. Ahmad appears in Jaffar’s castle and is quickly captured, but seeing him restores the Princess’s memory, so the Grand Vizier sentences them both to death. Abu shatters the All-Seeing Eye and as a result is transported to the ‘land of legend’ where he is greeted by the Old King (Morton Selten) and thanked for freeing the inhabitants, who had been turned to stone. As a reward, he is given a magic crossbow and is named the king’s successor. However, to save Ahmad, Abu steals the king’s magic flying carpet and rushes to the rescue. Abu’s marvelous aerial arrival in Bagdad sparks a revolt against Jaffar. Abu kills the fleeing Jaffar with his crossbow, and Ahmad regains his kingdom and his love. However, when Abu hears Ahmad’s plan to send him to school to train to become his new Grand Vizier, Abu instead flies away on the carpet to find his own fun and adventure. 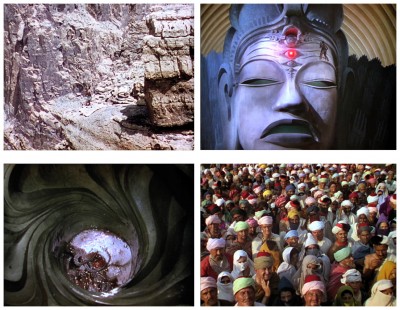 Admittedly, the movie is initially slow-moving and a little complicated, but the pace really picks up once Abu encounters the scary genie. It was an unusual experience at the time to watch a long sequence (the best in the film) in a British production featuring characters played by a dark-skinned Indian boy and an American black man. The magnificent effects certainly had an influence on Ray Harryhausen, not least the mechanical doll of Krishna, which is very much like a Harryhausen invention. Set designer Vincent Korda, cinematographer Georges Perinal, and the effects team of Lawrence Butler and Jack Whitney all won Oscars for their efforts, and Miklos Rozsa received a nomination for his score. Roger Ebert included The Thief Of Bagdad among his favourite great movies (“On a level with The Wizard Of Oz (1939) it maintains a consistent spirit, and that spirit is one of headlong joy in storytelling”) and critic Bosley Crowther placed it, “…next to Fantasia (1940) as the most beguiling and wondrous film of this troubled season.” Indeed, The Thief Of Bagdad couldn’t be further away from twentieth-century warfare, yet it was released to the public on the brink of World War Two. It certainly could not compete with that conflict’s real-life horrors and yet, fragile and fantastic as it is, it found an audience that accepted its wonders as a welcome escape from the realities of marching invaders against which would sail no liberator astride a magic carpet. This is one of the few great epic romances of the last century and a great contribution to the cinema of the fantastic. It’s on this rather upbeat note I’ll ask you to please join me again next week to see what the postman leaves on my doorstep – and sets on fire – for Horror News! Toodles! 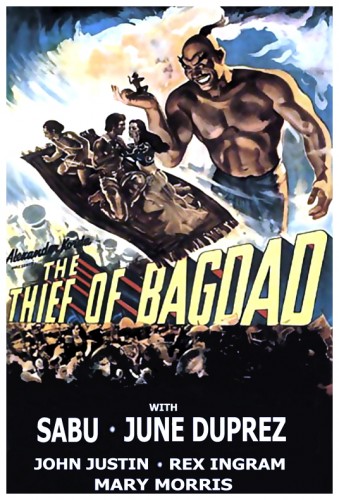 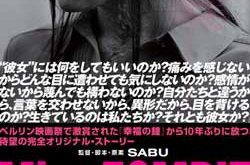 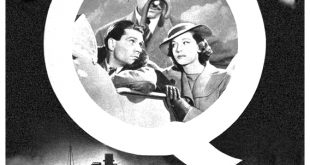