Blanc/Biehn Productions Continue Hellevator Man Anthology with FX Master Vincent Guatinis’ “The Future Executive”
Mick Foley signs up to take you on the ride as the MAN himself! First-Time Director Vincent Guastini Brings Special Eye for Detail to Project 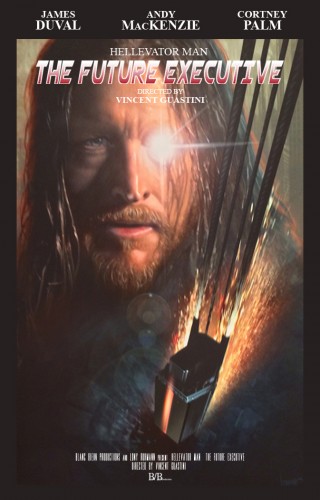 LOS ANGELES, CA, August 11, 2014 – Jennifer Blanc-Biehn and Michael Biehn’s indie production company Blanc/Biehn Productions (BBP) has just completed principal photography with first-time director Vincent Guastini on the short horror film “The Future Executive.” This is latest installment of BBP’s elevator-themed anthology, Hellevator Man, which was filmed in Los Angeles. The film is set for completion of all segments in 2015.

See the teaser at Hellevator – Man The Future Executive segment.

Blanc-Biehn tapped longtime special effects makeup/prosthetic/animatronics whiz Guastini – who also serves as the film’s Special Effects Supervisor – to direct the tense thriller. The production duo fell in love with Guastini after working with him for several years and entrusting his vision to make a compelling short film.

Guastini’s credits include Dogma, The Last of the Mohicans and Requiem for a Dream and BBPs Hidden in the Woods the remake.

“The Future Executive” centers around Devi (Sushi Girl’s Cortney Palm), a powerful young CEO that enters her office’s empty elevator for an important meeting as a gloved hand stops the doors from closing. Andy Mackenzie (Shoot ‘Em Up) plays Jack, a delivery man that follows Devi into the tiny space; the elevator doors part one more time for Liam (Donnie Darko’s James Duval), a mild-mannered office worker with an unrequited crush on Devi. A sudden power outage sets the stage for a nightmare ride ahead for the trio.

“It’s a benign everyday thing; you get onto an elevator with strangers, barely acknowledge them, get off at your floor and leave,” says Jennifer Blanc-Biehn. “But what if that elevator stopped suddenly and you’re forced into a confined situation that gets increasingly more intense as the hours pass?”

Blanc-Biehn and Blanc is in post on the Hellevator Man compilation, the Patrick Reas’ “It’s Hell Getting Old,” will accompany “The Future Executive” with more elevator-centric segments set for production in the months ahead. More will be announced, along with Frozens’ Scott Shirmer doing his entitled TEAR and Mick Foley (MANKIND) coming on board as The Hellevator Man and storyteller himself.

“With Hellevator Man, we want to capture that primal feeling of being trapped in this small box,” said Blanc-Biehn, “yet explore the open possibilities beyond it.”

Also stay tuned for a teaser for the other segments and more fun behind-the-scenes as each one comes together and more directors and segments get announced.

For more information on Jennifer Blanc-Biehn: