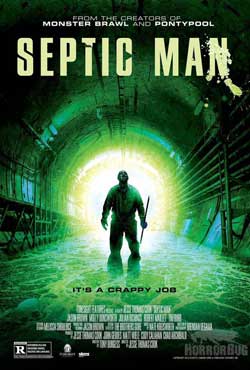 A sewage worker gets trapped inside a septic tank during a water contamination crisis and undergoes a hideous transformation. To escape, he must team up with a docile Giant and confront the murdering madman known as Lord Auch.

The appropriately titled Septic Man opens with a scene of a woman in what has to be the filthiest bathroom ever committed to film, in some serious gastrointestinal distress. She’s ejecting fluids from both ends of her body while frantically swallowing what looks to be Pepto Bismol tablets (although judging from the state of her bathroom, that ain’t gonna help too much). After a few moments of some furious screaming & convulsing – she falls to the filthy floor and dies. Then the camera cuts to a shot of the contents of her toilet…and that isn’t a pretty sight. Upon viewing this opening sequence, I had a pretty good idea of what I was about to spend the next 90 minutes watching. I was figuring I was in for a lurid, sloppy, gross story straight out of the Troma playbook, and for a short while, that’s exactly what I got. But then, not long after the film began, I realized that the filmmakers had a far different idea for this familiar scenario. Sadly, they fail to improve on it and somehow manage to muddle up what is usually a sure thing exploitation wise.

Septic man Jack (Jason David Brown) is seen directly after this opening sequence, working on a septic tank, when he’s approached by a gaunt man named Phil Prosser (Julian Richings) with an offer. It seems that the mayor (Stephen McHattie, looking more & more like John Carradine) of the city Jack lives in has issued an order of evacuation because of a seriously contaminated water supply and Phil would like Jack to investigate the source of the contamination – for a hefty fee. Jack has a pregnant wife at home & despite her pleas to join her in leaving the city, he decides to accept the offer. Jack soon discovers an off the map sewer system, but the lid closes on his head as he lowers himself into it and he falls into a fetid, filthy room that seems to contain every single bodily fluid you can think of – and a couple of dead bodies as well. From here on, the film follows Jack as he attempts to escape his putrid prison and as his body & mind are slowly eroding away. 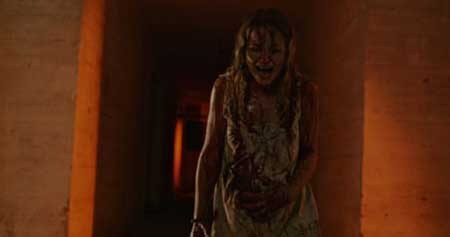 Every so often Jack gets visited by a giant (Robert Maillet) & his feral, sharp toothed buddy, Lord Auch (Tim Burd), but it’s quite possible Jack is imagining them so Septic Man is essentially a one man show, with Brown taking up nearly all of the film with his futile attempts to escape. And while Brown does a Herculean job of keeping the viewers interest as the movie drifts off into some existential scenarios that serve no real purpose other than to illustrate the erosion of Jack’s psyche, I’m afraid it’s a case of much ado about nothing cuz’ literally nothing happens.

Nothing except Jack’s slow physical transformation that is. And in that aspect, Septic Man succeeds with flying colors. Jack slowly transforms into what I can only describe as a living turd and yeeah – it’s as disgusting as you think it is. As a matter of fact, the production design of the film (By star Jason David Brown), is pretty spot on disgusting! There are copious amounts of literal crap staining every wall of Jack’s prison and there were moments where I swore I could smell what I was watching (Although to be fair, I haven’t cleaned behind my sofa for the last few years, so who knows?). Septic Man feels grotty and gross, and that really helps to sell the situation Jack finds himself in. Toss in lots of scenes of vomiting, a body cut in half, rotting corpses and rat heads being bitten off and I can safely state that the filmmakers definitely got the ambiance they were looking for. 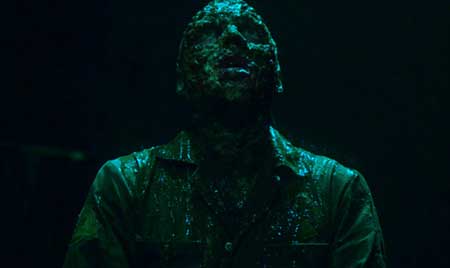 But it all adds up to nothing. Those of you expecting a Toxic Avenger like tale (As I was), will be sorely disappointed (As I also was). Director Jesse Thomas Cook was responsible for 2011’s Monster Brawl, a film I really enjoyed. So I was anxiously awaiting this one and while the direction is indeed competent, I was left wondering how much of that competency was due to the outstanding production design. Septic Man was written by Tony Burgess, who also wrote 2008’s PontyPool. And while that film has a rather rabid cult following (A certain cheeky friend of mine is a big fan of it), I didn’t dig it all that much and I seriously doubt if Septic Man is going to be as popular as PontyPool turned out to be anyway. 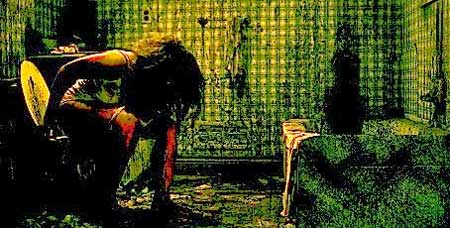 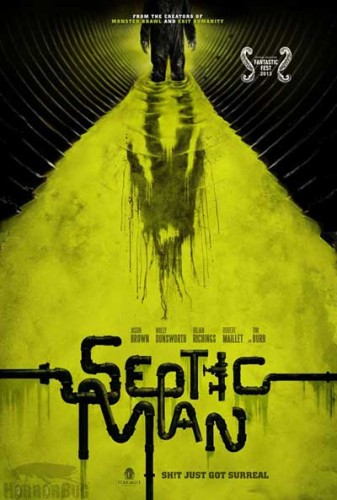 So what do we have here? We have a man trapped in the most disgusting sewer you can possibly imagine as he slowly turns into a giant turd. And we get to watch his slow disintegration over the course of the next 90 minutes in the hopes that he’s gonna get out and wreak his filthy vengeance on the people responsible for luring him down there. But that never happens, although in an odd prologue he does get out, only to go back in and be worshipped as some kind of sultan of shit(?) by a group of other septic people(??) who adorn him with what look to be intestines(???). What the f*ck did I just say? What the f*ck did I just watch?

All in all, Septic Man is pretty shitty.