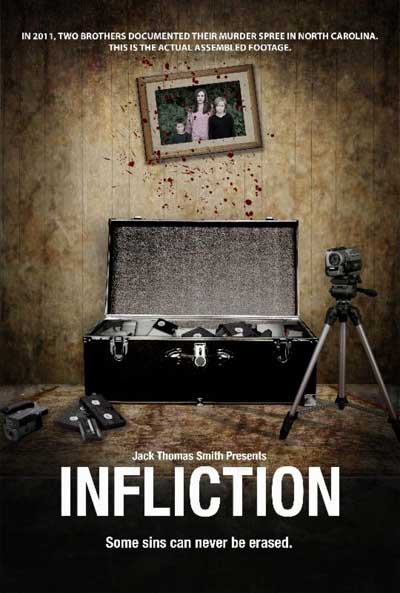 Two brothers calmly record their gruesome crimes in the buzzed-about horror document INFLICTION, which takes the found-footage genre to the next unbearable level. The deeply unsettling shocker will have home viewers double-locking their doors when it arrives on DVD and VOD on July 1, 2014, from Virgil Films.

Writer-director Jack Thomas Smith put himself on the horror movie map in 2006 with the cult psychological thriller Disorder. Now, with INFLICTION, he upends conventions and expectations to deliver a stunning and utterly surprising thriller that has already developed strong word-of-mouth based on its select theatrical screenings, including at New York City’s venerable Anthology Film Archives.

With INFLICTION, Smith assembled footage taken from the cameras used by two psychotic brothers, who documented a murder spree in North Carolina in 2011. Unlike its predecessors The Blair Witch Project and Paranormal Activity, which relied on sparse visual evidence of supernatural activity, INFLICTION reveals in shiver-inducing detail the brothers’ hideous actions and what led them to commit their crimes. It shows the effects of people’s actions (or inactions) and their effect on others’ lives, presenting in cold reality a hard look at the blurred line between society’s criminals and its victims.

The film screened at the 2013 Buffalo Niagara Film Festival, where Smith won the award for Best Story in a Feature.

“Working on INFLICTION left me troubled and haunted,” the filmmaker said. “It left me thinking about people’s actions or lack thereof and the inevitable domino effect. We all walk our own path in life, which shapes and defines us. What happens to us today, good or bad, will affect generations to come.”

Smith is currently working on his next thriller, In the Dark. 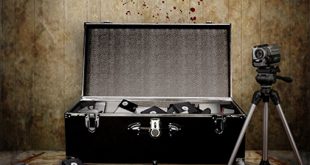 This Exclusive Clip From ‘Infliction’ Will Hit You Like A Brick