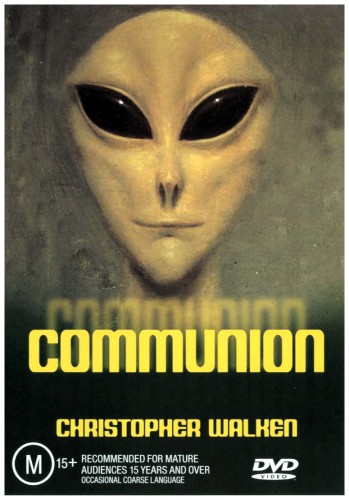 SYNOPSIS:
“Whitley Strieber goes with his family and some friends to his holiday home in the forest. They experience some weird occurrences, are they UFO activity? Whitley is abducted and then faces a horrible dilemma; was I abducted or am I going mad? He sees a psychiatrist who tries to use hypnotic regression to discover the truth.” (courtesy IMDB) 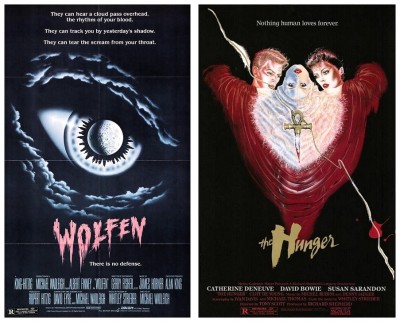 Then something rather bizarre happened on Christmas night in 1985 – In the early hours of December the 26th, Strieber is awakened by a dream, insisting that he was abducted from his cabin in New York by ‘non-human visitors’ and, in the following months, suffered dreams in which he is offered testimony by the visitors that ‘we are not alone’ and ‘the truth is out there’. He soon discovers that members of his family have had identical dreams. He wrote about these and other experiences in his novel Communion (published 1987), his first attempt at a non-fiction book. Although the novel is generally regarded as a story about alien abduction, Strieber doesn’t actually draw any conclusions about the identity of his alleged abductors, but refers to them simply as ‘visitors’, a name chosen to be as neutral as possible to entertain the possibility that they may not be extraterrestrials at all and might simply be a figment of his own overactive imagination.

Strieber’s attempt to deal with this shattering assault from the unknown translated into a best-selling novel. Number one on The New York Times Best Seller List and with more than two million copies sold, Strieber wrote four sequels detailing his experiences with the visitors: Transformation (published 1988); Breakthrough (published 1995); The Secret School (published 1996); and Solving The Communion Enigma (published 2011). There was also the inevitable film version of Communion (1989), directed by Philippe Mora starring Christopher Walken as Strieber and Lindsay Crouse as his wife Anne. It’s hard to believe that a ‘true story’ would have all the makings of a gripping science fiction fantasy adventure, delving into the drama of a family caught in a living nightmare, tracing Strieber’s self-doubt, following him as he seeks medical help and possible psychological explanations for the phenomenon.

Strieber has officially stated his dissatisfaction with the movie version, citing long scenes of improvised dialogue and themes not present in his novel. Predictably it was not an easy film to make. One man’s dream can be another man’s nightmare, and that other man was my old friend and fellow Australian Philippe Mora, who I was lucky enough to run into on the set of Pterodactyl Woman From Beverly Hills (1997): “Communion was an incredibly difficult film to make. The film is closest to a psychological thriller or a mystery, and I think the constraints on it, because it was based on a true story about real people, were enormous. Obviously the urge was to goose it up a bit and make it more of a conventional entertainment, but I just had to restrain that urge.”

“The main problem for me as a filmmaker was that the story had no ending. Audiences are used to act one, act two, act three, but this has no conclusion. This is a ‘What do you think?’ which is, unfortunately, going to leave a lot of people in the mainstream audience just dangling there, unhappy. But there was no way around it, because there was no answer. Communion is such a fascinating story because it’s the first time someone as articulate as Whitley had a psychological trauma, or whether he was visited by aliens, or some combination of both. That was the biggest difficulty in adapting the story because it’s open-ended. It would have been neat and tidy to have one or the other. I know in commercial terms that would have satisfied the audience. I consulted with Whitley quite a bit as we were making the movie. It was such a surrealistic experience that had occurred to him that the whole thing was very complicated.”

“It was quite freaky having Whitley around. Not that we had any differences or anything like that, as much as he sort of freaked out when we started. He got very disturbed by seeing these things coming to life on the screen but, after he got over that, it was fine. I think as soon as you say something is based on a true story, a story as outrageous as this, it’s going to cause some controversy, but the controversy is sort of overblown. A key element of the book and the film is Whitley’s own skepticism about his experience. He really didn’t know whether it had happened to him or not, he just said it was an incredibly intense experience. The only way that he could find a satisfactory explanation in his own mind, was that the beings are in some way real. Whether it is a physical or psychological reality, it’s just amazing that it happens on this scale. It’s almost like a religious experience for atheists. We got a lot of comments from people. They liked the film a lot and some of them who had similar experiences were disturbed by it because it brought back memories, sometimes unpleasant memories.”

Sleep Paralysis is a phenomenon in which people, either when falling asleep or wakening, temporarily experience an inability to move, virtually paralysed. It’s actually a transition state between wakefulness and rest, characterised by a complete weakening of the muscles. It normally occurs either as you’re drifting off to sleep or just before waking up. The brain reacts to the paralysis by expanding the pupils, making a darkened room look as bright as day, and is often associated with terrifying visions such as intruders. In ancient times these were interpreted as visitations by angels, but in contemporary western culture the angels have been substituted by aliens. Such hallucinations occur in at least twenty percent of all reported cases of Sleep Paralysis which, in combination with the hallucinations, has long been suggested as an explanation for many reported alien abduction cases. I myself experienced a case of Sleep Paralysis in the early nineties – alone, it took me a couple of hours to get my muscles working enough to crawl out of bed and get to a phone. Absolutely no pain, just paralysis, as if waking up with one’s spine out of alignment.

“Another interesting reaction is, people who never thought they’d had any experiences said that this triggered something in them of things from their childhood. But then, you never know, some people are just more susceptible to suggestion than others, and some want to believe that there is more to life than this, and one of the ways in which that is manifested is in these stories of extraterrestrials. Depicting the aliens was a very complicated and subtle problem as well, because Whitley always felt that what he was seeing was not the aliens. As seen in the film, they appear just as Whitley remembers them, looking not quite real and somehow mask-like. He always thought they were kind of puppets or fake in some way, which was a very difficult point to get across in because it’s so literal. I tried to get that across by showing some scenes where you see what they are – masks – where one alien’s face is pulled off, and there’s a scene with Christopher Walken sitting next to a blue head removed from the body. I thought it was very clear that these aliens, these manifestations, were not what they really were. Though some other reviewers took it very literally and said they looked fake, which is exactly the point. It’s a subtle point, maybe too subtle for a mainstream movie.”

“I always thought he (Christopher Walken) was a terrific actor, but he was perfect for this because I felt he could portray a writer, which I think is a difficult thing for an actor to portray on the screen because writers don’t actually do anything on-screen. It’s not like a plumber or a cowboy or something – it’s all cerebral. I felt that Chris could really show that something was going on behind the eyes. He’s got an off-beat quality which I just think fitted this. After all, it is a story about someone who thinks they are going crazy, and I thought Christopher could really get that across. It’s an interpretation of his character. I wanted him to match the real Whitley only in spirit, I don’t want to try and make it a facsimile. For example, Whitley is a Texan, Christopher played Whitley as a New Yorker.” Although the director’s relationship with the writer goes back to the sixties when both were living in London (Mora painting and Strieber studying film), he refused to draw on their past to shape the Strieber film persona.

Born in Paris, France and raised in Melbourne, Australia, Philippe Mora began his career at the age of eighteen when he launched the highly regarded industry magazine Cinema Papers. In the late sixties he moved to London to pursue painting and film-making and, consequently, wrote and directed his first film Trouble In Molopolis (1969). He followed this with Swastika (1974), Brother Can You Spare A Dime? (1975) and two award-winning documentaries. Mora then returned to his home Down Under and, with Mad Dog Morgan (1976) starring Dennis Hopper, became part of the seventies new wave now known as Ozploitation. This was also one of the first Australian films to receive wide release in the USA, bringing him to the attention of Hollywood executives. In 1978 Mora relocated to Tinseltown and eventually directed a horror film for United Artists entitled The Beast Within (1982), about a seventeen-year-old boy who turns into a giant katydid.

Other pre-Communion films by Philippe Mora include The Return Of Captain Invincible (1983) starring Alan Arkin, A Breed Apart (1984) starring Rutger Hauer, The Howling II Your Sister Is A Werewolf (1985) starring Christopher Lee, Death Of A Soldier (1986) starring James Coburn, and The Howling III The Marsupials (1987) starring Barry Otto. After the release of Communion, Mora started pre-production on a film version of another Whitley Strieber novel, Majestic (published 1989). While Communion only had a budget of about US$5 million, Majestic had a proposed budget of US$15 million or more. The story is based on the real-life incident that took place in Roswell, New Mexico in 1947 when the military put out a press release stating they had captured a crashed flying saucer. However, the very next day they retracted their statement, claiming that what they had found were the remains of a meteorologic balloon.

“Majestic won’t be as tough because it’s fiction and there’s so much latitude. One isn’t faced with recreating characters who are actually living and staring at you. It’s really just a thriller with a fictional narrative. The logistics of it would be as complicated as any other picture dealing with special effects and things, but the subtleties aren’t as awesome. I found this story fascinating because this incident is the origin of all the stories of government cover-ups of UFOs. I think the whole UFO issue and sightings of UFOs terribly fascinating.” Unfortunately, as everyone in the film industry knows, the best laid plans of mice and men often go awry, and the film version of Majestic never went beyond the drawing board. Whitley Strieber went on to become an unofficial spokesman for various UFO movements, and Philippe Mora went on to make some excellent documentaries and some truly awful films, but that’s another story for another time. Right now I’ll make my farewells, but not before profusely thanking Juanita Elefante-Gordon for assisting my research for this article. Be sure to hit the highway to hell with me again next week while I drive you to delirium to witness another car crash on the boulevard of broken dreams for…Horror News! Toodles! 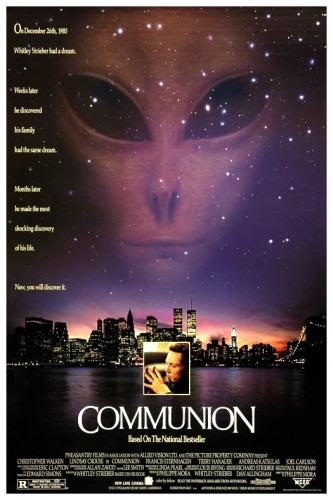