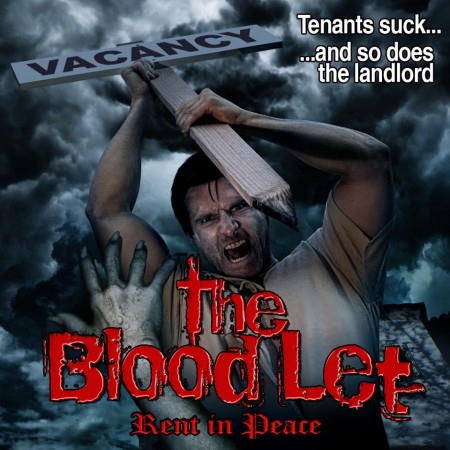 Gus, the resident manager of The Royal Vista Apartments, finds himself face to face with the supernatural as many of the tenants begin turning up dead. When the owner pressures him to rent the now empty apartments, Gus mistakenly rents the vacancies to a pair of vampires.

The Blood Let from writer/director J.R. McGarrity is much better in what it wants to be, in what it strives to be, than in what it succeeds or fails to be. At the root of the film is a decent story, a mostly original tale of a man who rents a vacant apartment to a pair of vampires. But the film itself ends up being a bit more than that and it is those extras that make The Blood Let an above average affair. The problems the film faces are those common with low budget, independent features: no money, unconvincing acting, no money, wonky special effects, no money, poor lighting, and no money. Rollin Blanton as the lead, Gus, while charming enough is annoying uneven.

Clint Jung is hilarious as Wang, the owner of the Royal Vista Apartments, but too far out of sync with the tone of the rest of the film, even with its often displayed sense of humor. David Landry is promising as Conner, half of the vampire couple who take up residence in the apartment building, but he isn’t given enough to do. Despite its flaws, The Blood Let is an entertaining film with a curious plot and a unique approach to vampires.

The film begins abruptly with Gus, the resident manager of a run down apartment building, fixing the sink of a questionably slutty tenant. It is not until later that it is shared that he is suffering from a rare condition where he sees people in various forms of undress. What that has to do with the story, other than to set up a number of dry humor visual gags and to continually get the protagonist into deep trouble, is hard to decipher. Soon two of the tenants turn up dead, including the oddly named Mr. Glassc**k (Bill Oberst Jr.) who hangs himself in the attic. After the vacancies are posted, a creepy, but persistent, couple mysteriously appear in the middle of the night trying to rent the apartment. Gus continually turns them away. Eventually Gus is forced to cave into pressure from Wang to rent the space, he rents to Connor and Star who never appear during the lights of day. Soon more people begin turning up dead but the surviving tenants and the police suspect Gus. Gus, however, suspects vampires.

One of the better moments in The Blood Let is the manner in which Connor and Star, the vampire couple, work their way into the apartment. The scripts requires the popular understanding that vampires cannot enter a home uninvited. “Let us in,” they beg over the building intercom. This plays out over a number of nights with the duo returning to repeat their requests waiting patiently for Gus to simply let them in working hard to convince him with each visit. It is an interesting premise well played within the confines of the gated apartment complex setting.

Once they gain entrance to The Royal Vista Apartments, Connor and Star liven the story up quite a bit. Elise Jackson is a blast as Star getting the opportunity to spit out maggot covered chunks of meat: “It’s rancid, don’t eat that.” But, it is David Landry who makes the most of the sparse dialog and plot. He delivers his lines with a candor and sense of humor that is reminiscent of a young Ray Liotta – in the best possible “Something Wild” sort of way. Then, to the writer’s credit, the film spins the vampire story in a favorable twist as Gus discovers the truth behind the vampire’s desire to target this particular dwelling. 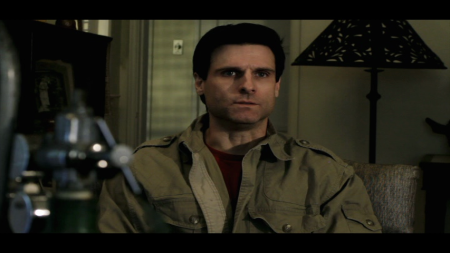 Many directors have to struggle with “getting noticed in a noisy world” walls that surround new talent. There are so many low budget films on the market, with online VOD, in Film Festival, on multi-film DVD compilations, it becomes a challenge to stand out among the crowd. J.R. McGarrity promises more than he delivers with The Blood Let, but overcomes most of the films shortcomings to deliver a suitable b-movie feature that would have found its home easily on VHS features in the Eighties or on a second billing at the drive-in.

The film has a lot in common with those b, c and d features and is only a strong, memorably monster make-up effect away from matching that standard. McGarrity handles the creepier scenes with a sure hand, the attic scenes in particular and the shots of Mrs. Ezell skulking around eating rats and gnarling at the camera. On the other end of the spectrum, he balances humor and insult with Wang (Clint Jung), a character this is hilarious but borders on culturally insensitive. J.R. McGarrity is an auspicious director that will be interesting to revisit in the next few years with his next few features.

The Blood Let is notable for its handling of its vampires and how they gain access to the apartments. It also has a script that has a lot going for it with an interesting setting, a lead that suffers from a unique ailment and much needed sense of humor. The film regrettable suffers from an uneven tone in its horror and its humor that prevent the film from tonally gelling. The acting derails the film as well. Rollin Blanton as Gus delivers his lines without a variance of tone or emotion throughout much of the film, whether he is having a troubled conversation with his therapists, facing the accusations of the building’s owner or reacting to the drunk in the dumpster or the frightening advances of Connor and Star.

Thankfully he displays an earnest and authentic personality that suggests more is going on and that he is in on the joke which goes a long way in this particular feature. The Blood Let strives to be far more than it is, or at least its scripts does. Odd tone aside, and lack of memorable visuals and effects, The Blood Let is a fun little flick worth the investment of time. It has a lot going for it regardless of how each of those pieces fit together.