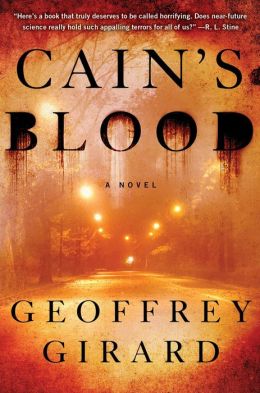 We, as a people, carry a bizarre obsession with serial and spree killers. My wife has a rather large section of our library dedicated to the subject and she is, by no means, alone in her focus. They seem to be a part of the American mythic collective, where we tend to view them as something significantly more, or less, than human. In our minds, they are monstrous, gigantic beings of grotesque intent and capability instead of broken human beings acting in a horrific fashion. Therefore, it is no surprise that we get so much fiction focused on them.

In Cain’s Blood, Geoffrey Gerard  gives us a world where the proverbial mad scientist (as a part of the Grand Organization of Super-Mad Scientists, under the guise of a humble evil corporation) has taken to cloning some of America’s worse serial killers. Ostensibly, this is to isolate the gene that makes us do evil things to each other (I believe they called it the Cain gene, out of subtlety), but we all know that isn’t what it will end up being used for, right? Now, a group of those kids are roaming the country and painting it fifty shades of crimson. Enter former soldier and current merc Shawn Castillo and the “pure” clone of Jeffrey Dahmer, Jeff Jacobson, to hunt them down. Blood, paranoia and introspection ensue.

Comparisons to Crichton and Harris are inevitable. You have tons of somewhat scientific mumbo-jumbo at the heart of a tale that focus on a determined sleuth’s manhunt or a sadistic killer (or killers, in this case). Hell, I’d throw in the political paranoia of Robert Ludlum in there, too. If you like them, I’m sure you’ll enjoy yourself with this one. I don’t.

I see a lot of potential here. We’ve got a boy struggling to define himself and figure out if he is what he was designed to be, or his own person. Monster or Man. We’ve got a modern equivalent to the old broken down P.I. of the noir days, with his own personal demons tied inextricably to the larger events of the books. A bit of a buddy cop thing between two seemingly disparate individuals who are forced to put aside their mutual distrust and realize how alike they truly are (in the sense that they were both designed to kill). Hell, there is a monumental opportunity to deal with the dichotomy of value and horror we place on mass murder, as a society. Any one of those things could get me doing a jig. All of them would leave me convulsing.

However, that potential just wasn’t met for me. The boy is largely sidelined (though he has his own book, Project Cain, which may delve face first into his interior dilemma). The nefarious demons are completely monochromatic, mustache twirling, muwahahahaing baddies with no depth to make them interesting to me. To me, though the worst part is how on- the-nose it is about the grand thematic tie in. At a couple points, the narrative stops dead to have a character, usually Castillo of Jeff, point out that soldiers aren’t much more than murderers for hire. I don’t like feeling as if the writer is calling me stupid.

Don’t get me wrong, the writing itself is usually tight and the pacing, when not stopped dead by exposition, is smooth as butter. Certainly, fans of the aforementioned authors will enjoy themselves here. But, I couldn’t get past what I so much wanted this novel to be. However, I admit being incredibly curious about Project Cain, since the kid was the character I really wanted to know more about.