On November 20th 2013,Life Itself, a new documentary about the life of Roger Ebert, will launch a crowdfunding campaign through Indiegogo seeking support for an innovative pre-release led strategy which the film’s producers hope will unite the global community of the late film critic’s fans. 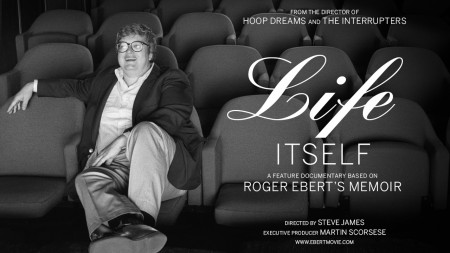 A key feature of the campaign is the ability for supporters to obtain a private streaming link to view the film in advance of its theatrical release, planned for early in 2014, thus making contributors the first audience to view the completed film. The campaign also includes theatrical screenings and other exclusive rewards, though it intends to maximize community and audience involvement by focusing on the opportunity to “pre-buy” early access to the film as a mode of celebrating Roger Ebert’s legacy and impact on cinema.

The film’s Indiegogo campaign page (igg.me/at/EbertMovie) states: “we are offering a private pre-theatrical streaming experience of the film as the central reward for our partners in the campaign. Everyone, everywhere will have the ability to support the film and participate in its actual premiere. This is exactly what Roger stood for and exactly what Roger would have wanted: accessibility for all.”

The film began production in December 2012, four months before the death of the Pulitzer prize-winning journalist, film critic and screenwriter. It is based upon Ebert’s own memoir, Life Itself, and recounts the surprising and entertaining life of the world-renowned film critic and social commentator – a story that by turns personal, wistful, funny, painful, and transcendent.

Steve James (Hoop Dreams, The Interrupters) directs the film which is being produced by Zak Piper for Kartemquin Films with Martin Scorsese, Justine Nagan, Gordon Quinn, Kat White and Mark Mitten as executive producers.  It will be theatrically released in 2014, with CNN Films presenting and CNN holding first-window broadcast rights to the film.

Ebert played a major role in both Scorsese and James’ careers. He was an early champion of Scorsese’s directorial debut Who’s that Knocking at My Door, and authored the eponymously titled book on the filmmaker. Along with Gene Siskel, Ebert also was the first to champion James’ Hoop Dreams which he eventually named one of the best films of the 1990s along with Scorsese’s Goodfellas.

After the project was first announced – through Roger Ebert’s Twitter account – in September 2012, Ebert stated that “I believe Steve James’Hoop Dreams is one of the greatest documentaries ever made, and my hopes for this [new documentary] are high.”

The producers are seeking a total of $150,000 through the Indiegogo crowdfunding platform, with the campaign ending at 11:59pm on December 20th 2013.

“We also intend to contribute towards charitable causes that represent Roger; what he stood for as a critic, a progressive voice, and someone who bravely battled cancer and disabilities: The Ebert Foundation, and The Roger Ebert Film Studies Center at his alma mater, the University of Illinois,” says the film’s campaign page.