New Trailer For WER Transforms Right In Front Of Your Eyes

It’s time for the werewolf film to go a little “found footage” on your ass and who better to bring the goods then those fine folks who brought us some of the Paranormal Activity craziness! The film is titled WER and as the trailer shows tells the tale of a defense attorney looking to defend her client accused or murdering a family only to find out that her client is just a little bit of a werewolf.

Starring A.J. Cook, Simon Quarterman, Vik Sahay, and Brian J. O’Connor and directed by William Brent Bell this one also treats us to the handiwork of FX madman Robert Hall and his company Almost Human which for me is the only reason I need to pick this one up.

You ready to see a little bit of what I’m talking about? All right then:

I know a lot of you are just sick to death of all the “found footage” stuff so I guess it’s time for me to piss you off but I kinda like the looks of this one (ducks and covers head) and with Hall and crew handling the effects it more than deserves a chance. No US release info although IMDB does list a Nov. 16th release in Japan so if in fact true perhaps a US release is in the works. 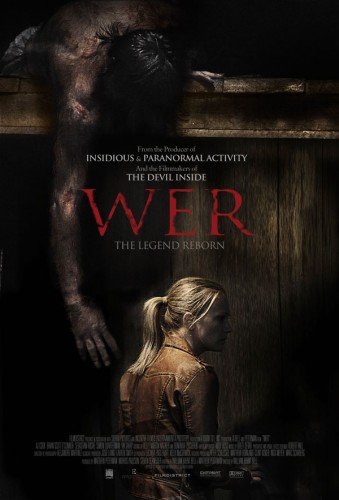