Home | The Vicious Brothers Are Ready To Bring Us THE VISITORS

The Vicious Brothers Are Ready To Bring Us THE VISITORS

I don’t know about you but I dug GRAVE ENCOUNTERS. The Vicious Brothers put a nice spin on the found footage/ghost hunters sub genre and their next project they are going to take on aliens, or so it would appear.

The project is titled THE VISITORS and the sales art teases”They don’t come in peace!” So it sounds like were dealing with some pissed off aliens at that.

Lets take a look at the artwork, shall we?

Here’s the synopsis as posted by STYD, so thanks to them for that:

A group of college friends travel to a secluded cabin in the woods for a weekend of partying. As the night is winding down, they notice something strange in the sky: A ball of fire descending through the air.

They drive out to investigate and find something incredible: The wreckage of a crashed aircraft, along with a pair of ominous footprints that lead out of the ship and into the woods…back towards the cabin. A thrilling and terrifying fight for survival ensues as the characters hole up in the cabin, board up the doors and windows and desperately try to survive the night as vengeful unwanted Visitors attack from all sides.

Tags The Vicious Brothers The Visitors 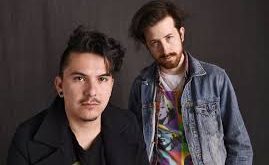