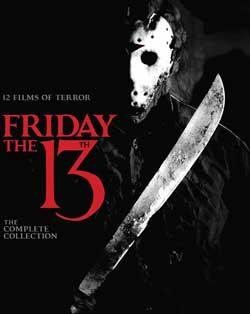 It’s hard to believe that the ultimate Friday the 13th product has arrived. We of course have been tempted with smaller versions and combo sets. But in the same way I’ve patiently waited for a SAW bluray set to rear its ugly head, we can finally rest back and take in all things “Friday the 13th”. For starters, lets get the goods out of the way. The set contains 10 discs which feature all the franchise films under one cool metal box casing

Now for those who are astute, will of course recognize a few films that haven’t been available on bluray until now (Friday the 13th 4 “Friday the 13th: The Final Chapter ” and “Jason X”). Each is presented in high quality full HD resolution and looking the best they ever have. The set contains a cool all color 40 page booklet taking us thru the franchise history with plenty of great photos to gaze upon.

The set is listed as also containing “11 hours of previously released special features”. Fans will be happy to know that they didn’t forget “Freddy Vs Jason” or the new Friday the 13th remake. To review all the films here would go on for days, so this entry is best reserved for comprehensive overview:

Now we all remember the year 1980 (well I hope you would) as the year that horror took a new turn. We were exposed to one of the ultimate slasher films of all time introducing us to a new icon that would last for years as a mainstay….Jason Voorhees.

Those camp counselors and their lack of proper attention to a young boy drowning only planted the seed for a supernatural comeback. Jason’s mother kicked it off, but it was Jason who has the last word. Then like clockwork arose the franchise that brought us one scare after the other. Consistently from 1980 to 1982, we were presented with the first 3 films. A year break and then 3 more to follow. The franchise would grow to become somewhat traditional with a body count style of horror that would entertain us over the course of killing off foolish teens who arrived for the occasion. 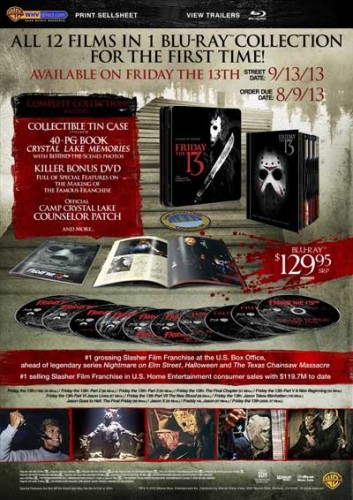 Jason would also become more and more supernatural until we just assumed he was some for of faceless demon who liked to play hockey (ok, well maybe just the mask)

The franchise never did actually make it to a part 13, as the titles began to change to become a little bit more unique. I suppose that option always open but at the price of creating 3 more films. Instead number 10 was to be the last “numbered” version opening the franchise for a full remake in the interest of starting over.

Did I mention that part III is in 3D and comes with 3D glasses! Now “that” is cool in itself!

For buyers, this really is a must have product! I did snicker at the titles which range from “final chapter” to “new blood” and “new beginning”. Then back to “Final Friday” which then lead into “Friday the 13th 1” again with new faces……..go figure! I got the feeling that studios were a bit confused at times where they were going with the franchise.

Enuff said, get this one while its hot, you surely wont be disappointed!

Tags Friday The 13th Friday the 13th: The Complete Collection