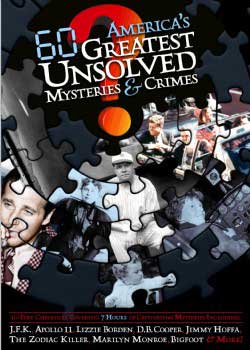 2 DVDs spanning over 7 hours of material! This hot collection from Mill Creek Entertaiment has tons of controversial subejct matter all nicely and neatly packaged under one roof. The site lists the film as 9.95 which makes for a cool way to see al the history channel type material in one sitting.  As an enthussiast I’ve read countless books on the material covered here. Roswell, JFK, Babe Ruth, Jersey Devil, Apollo 13…shall I go on? With this much material in little package, we should all spend a little moment on some downright important events that have stayed with us even up to htis day. It doesn’t stop there as it expands into Salem Witch Trials, secret societies and a gaggle of things in between….what a cool release!

RIPPED FROM THE HEADLINES!
SEARCH FOR ANSWERS BEHIND THE BIGGEST MYSTERIES!

This compelling documentary series presents a countdown of America’s 60 most notorious unsolved mysteries and crimes in a dramatic compilation revealing these unanswered questions in 10 fascinating episodes.

Features Include:
The JFK Murder Conspiracy
Who Kidnapped the Lindbergh Baby?
Did Babe Ruth Call His Shot?
Did Lizzy Borden Kill her Parents?
What Really Happened to Amelia Earhart?
Who Whacked Bugsy Siegel?
Roswell – Are We Alone in the Universe?
Is D.B. Cooper Alive?
Was Apollo Eleven’s Moon Landing a Hoax?

America has been plagued with unspeakable crimes and unexplained phenomena that have captured nationwide attention and intrigue, demanding answers and retribution. However, many of these mysteries never get explained. Mysteries that to this day are still thwarting the best efforts of countless law enforcement and investigative teams. Serial killers never identified, treasures lost, murderers never caught and conspiracy upon conspiracy spinning into tangled webs of inconclusive evidence and unresolved truths.

Program 1
60. Where is Natalee Ann Holloway?
59. Could Nicola Tesla’s Greatest Invention Power the World for Free?
58. Who Discovered America First?
57. Did John Wilkes Booth Get Away with Murder?
56. The Mystery of Ambrose Bierce
55. Is Jim Morrison Dead?
54. Was Marilyn Monroe Murdered?
53. Joseph Smith and the Golden Tablets

Program 3
46. Was Apollo Eleven’s Moon Landing a Hoax?
45. Did Tom Horn Really Murder Willie Nickell?
44. Where is the Treasure of Dutch Schultz?
43. Were Sacco and Vanzetti Innocent?
42. Will the Tylenol Murders Ever be Solved?
41. Where Did Wisconsin’s Eagle Diamond Come From?
40. What Killed Harry Houdini?

Program 5
32. Has Anyone Ever Escaped from Alcatraz?
31. What Happened to Judge Crater?
30. Who was the New Orleans Axeman?
29. The Riddle of Native American Rock Art
28. Where is Aimee Semple Macpherson?
27. Did Butch Cassidy and the Sundance Kid Survive Bolivia?
26. Where is James Whitey’ Bulger?

Program 6
25. Why Did the Rosenbergs Have to Die?
24. Who Pulled Off the St. Valentine’s Day Massacre?
23. What Were the Phoenix Lights?
22. Was Sirhan Sirhan a Mob Assassin?
21. Was Pearl Harbor Really a Surprise Attack?
20. Who’s Really Buried in Billy the Kid’s Grave?

Program 7
19. The Lost Colony of Roanoke Virginia
18. Is D.B. Cooper Alive ?
17. What Happened to Jimmy Hoffa?
16. Did Lizzy Borden Kill her Parents?
15. The Curse of the Lost Dutchman Mine
14. Who Killed the Black Dahlia?

Program 8
13. America’s Masonic Conspiracy
12. The Strange Mysteries of the Anasazi
11. What Really Happened to Amelia Earhart?
10. Who Kidnapped the Lindbergh Baby?

Program 10
5. Who Lost the Civil War for the South?
4. Who was the Zodiac Killer?
3. Who Murdered JonBenet Ramsey?
2. Roswell – Are We Alone in the Universe?
1. The JFK Murder Conspiracy 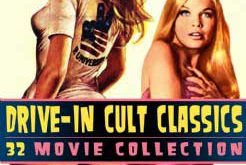 Mill Creek Lowers Prices on DVDs – get great compilations for $9.98