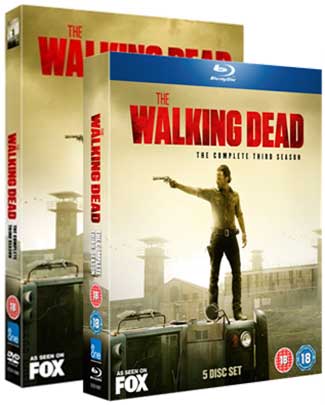 Rick Grimes and his family of survivors must now face a brand new fear – the living – when THE WALKING DEAD: The Complete Third Season comes to DVD and Blu-ray on 30th September 2013 with over an hour of special features.

With record breaking viewing figures around the world, the cultural phenomenon has gone from strength to strength with fans and critics alike agreeing that season 3 is the best yet with more gore, more action and a visceral intensity not seen before in the cult saga.

Andrew Lincoln once again returns as Rick Grimes who against all the odds has managed to steer his group towards relative safety but now faces new challenges as he battles not only his own sanity but a very real new threat in the form of The Governor, played menacingly by British actor David Morrissey.

In the highly anticipated new season, Rick and his fellow survivors continue to seek refuge in a desolate and post-apocalyptic world and soon discover that there are greater forces to fear than just the walking dead. The struggle to survive has never been so perilous.

Packed with extra features, THE WALKING DEAD: The complete Season 3 will be available on DVD & Blu-ray 30th September and is available for pre-order now from Amazon.

Based on Robert Kirkman’s hugely successful comic book series, THE WALKING DEAD is an epic, edge-of-your-seat drama where personal struggles are magnified against a zombie apocalypse. The series follows a group of survivors, led by police officer Rick Grimes (Andrew Lincoln) who are traveling in search of a safe and secure home. However, instead of the zombies, it is the humans who remain that truly become the walking dead.