Tom Savini is known as the Sultan of Splat. These days the F/X Master is embedded with voodoo priests, the undead, and a grand plan for the next zombie epic.

The legendary F/X Maestro, director of “Night of the Living Dead” (1990) and George A. Romero’s go to guy, is looking to get horror fans everywhere involved with his next movie, “Tom Savini’s Death Island.” If this journey of the undead is to rise it will be up to Savini’s fans to help make it happen via a unique crowd-funding effort set to launch on September 1st. 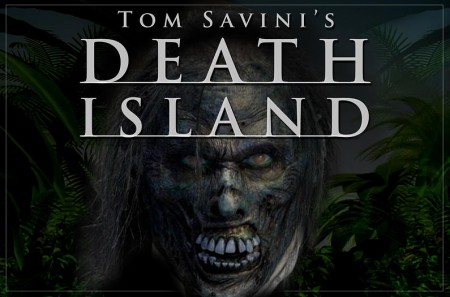 A few years back Savini said he would never direct another zombie movie unless he could make them scary again. Enter Rick Danford – horror film festival producer – with a fresh idea and Savini was onboard. He and Rick rewrote the script to help realize many of Tom’s visions of where the wildly popular sub-genre should go as well as some real life experiences from Tom’s past as military photographer during Vietnam that lend themselves to this creative concept. And with that, the casting has commenced. Savini approached the “Candyman” himself, Tony Todd, with a significant role in the film and Tony said: “I’m in!” Todd’s credits also include “Final Destination”, “The Rock” and many iconic film and television appearances. Other Hollywood names and horror icons are ready to join the horror funeral march if the money is raised. Plans are for “Tom Savini’s Death Island” to be in pre-production by years end.

Fans who contribute to make it happen will be gifted with exclusive “Tom Savini’s Death Island” artwork, posters, autographed props and even a chance to visit the on-site location and maybe even play a zombie in the film. Not to mention that all important opportunity to have their names listed in the credits of the next great zombie film.

The biggest gift of all, of course, will be the chance to see this horror master’s zombie film masterpiece that will raise the bar on the cinematic future of the living dead.

So we’re putting out the Call to Arms for genre fans the world over to show Tom Savini your support by visiting the movie’s website: www.letsmakeazombiemovie.com and jump aboard the zombie express when the crowd-funding site goes live on September 1, 2013.