Home | Witness The BIRTH OF THE LIVING DEAD This Fall

Witness The BIRTH OF THE LIVING DEAD This Fall

Those of you in the NYC area are in for a treat this fall when the IFC Center welcomes the premiere of BIRTH OF THE LIVING DEAD a brand new documentary about the Romero class NIGHT OF THE LIVING DEAD but this is not your standard documentary, this is something different, something special. As always seems to be the case, the press release holds all the info you could possibly wrap you head around so read on:

In 1968 a young college drop-out and aspiring filmmaker named George A. Romero directed Night of the Living Dead, a low-budget horror film that shocked the world, became an icon of the counterculture, and invented the modern movie zombie, which has spawned legions of films, books, comics, and video games, generating billions of dollars.

Night of the Living Dead is not only internationally recognized as an art film, revered for its groundbreaking treatment of American race relations and allegorical references to the Vietnam war, the film still maintains its cult status as a classic horror masterpiece. The film made history when it simultaneously screened at MOMA and the notorious grind-house theater circuit on 42nd Street. Since its release Night of the Living Dead has been selected for preservation by the Library of Congress and the National Film Registry.

Rob Kuhns’ feature documentary BIRTH OF THE LIVING DEAD goes beyond just being a tribute to director George Romero’s work, to explore a critical moment in the American experience and the notion that horror acts as a reflection of national anxiety. The film details how Romero gathered an unlikely team of real Pittsburgh citizens — police officers, iron workers, teachers, housewives and a roller-rink owner — to shoot in a revolutionary guerrilla style that became a cinematic landmark and one of the most visceral and influential horror films ever made.

Producer Esther Cassidy has produced and directed Enemies of War and The Wrong Man: The Case of Edward Lee Elmore for Court Television. She was Coordinating Producer of Barbara Kopple’s Oscar-winning American Dream and produced Kopple’s other films With Liberty And Justice For All; Justice For All; and Civil Rights: The Struggle Continues. She was Consulting Producer on the Peabody award-winning broadcast documentary A Healthy Baby Girl (2006); and the 2007 theatrical documentary Sacco and Vanzetti.

Executive Producer Larry Fessenden is the writer, director and editor of the award-winning art-horror movies Habit (nominated for 2 Spirit Awards), Wendigo, No Telling, The Last Winter (nominated for a 2007 Gotham Award, premiered at the 2006 Toronto Film Festival), and most recently, Beneath. He has served as producer on dozens of acclaimed films in and out of the horror genre through his company Glass Eye Pix, including Stake Land, Wendy and Lucy and The House of the Devil.

Film poster designer Gary Pullin is the Art Director for Rue Morgue, the world’s best-selling horror magazine. Gary has helped shape the ever-evolving face of horror, working as a designer with musician/filmmaker Rob Zombie, artist Mike Mignola (Hellboy), and horror icons Clive Barker and Basil Gogos. His award-winning illustrations and designs have also appeared in popular magazines such as HorrorHound, Famous Monsters of Filmland, heavy metal magazine Revolver and Royal Flush. He’s also worked in the music industry for vinyl releases and gig posters, t-shirts and album art for bands including The Misfits, Tiger Army, The Brains, Ghoultown, Electric Frankenstein and The Creepshow. 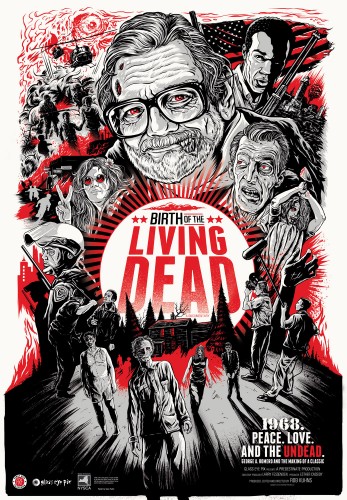 And lookie here, I even have a trailer for you:

Right now the only place you’ll be able to see this is at the IFC Center begining Nov. 6th but fear not, a DVD release will soon be on the horizon so keep it here and I’ll keep you informed as things progress.

Tags Birth of the Living Dead 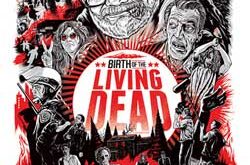