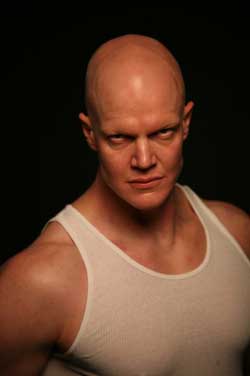 Michael Grise: How are you doing today Derek?

Derek Mears: I am super happy!

MG: In the movie Hatchet 3 you play a character named “Hawes” can you tell me about him and can you relate to him?

DM:Yeah for sure! I play a character named “Tyler Hawes” who is a headstrong, pompous, self absorbed type of guy. He is the commander of the swat team. He comes into the swamps to see where people have gone too, and to hunt down “Victor Crowley”.

MG: How did you acquire this role? Who contacted who?

DM: Actually I was contacted to be in “Hatchet 2” but couldn’t make it due to the “predators” movie so had to pass on it. Adam Green (writer ) and BJ Mcdonnell (director Hatchet 3) are friends of mine and came up to me and asked me to be in the movie. In fact the were half way into the sentence and I just yelled, Yes! Yes I’m in .

My mom would always ask me when I was young, what do you want to do for a living? I would say, I want to have fun with my friends and make a living from it. Yea, I don’t need to be famous or rich, I just want to create. So I’m thrilled I’m doing this and that I was invited. 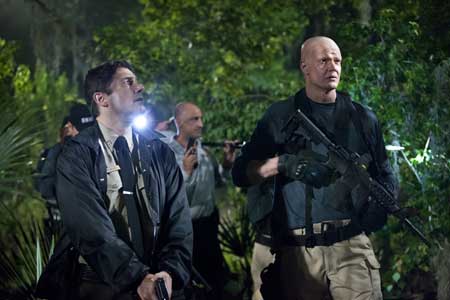 MG: This movie was filled with gore! What was it like on that set? where was it filmed?

DM: We shot in the actual swamps this time in Louisiana. We shot at night during think fog. At times it was tough to see, there was so many mosquito’s. People were getting eaten alive left and right. Thats the downside of it but the upside was that all of the cast members were so positive. We were just having fun with are friends and playing, it was a great time.

DM: It was! Especially watching “BJ” and “Adam” powwow at times going like “Hey what if we shot it like this? You know the fans would like it if!” There intention the whole time is like “Hey, were making this movie for the fans.” Its a refresher to see.

MG: How was it working with director “BJ Mcdonell”?

DM: Ahh it was so great because BJ is so kicked back and clear about where he is going with everything. Its inspiring because he came from being a camera operator and would get on the camera rig while everyone jumps into the swamp and get all muddy to get that perfect shot. Its funny having your general go “i know what you guys are doing, let me jump into the front lines and get in the war with you”. I was always like “holy crap this guy know what he is doing and is passionate about this project”. So it was fantastic working with him. 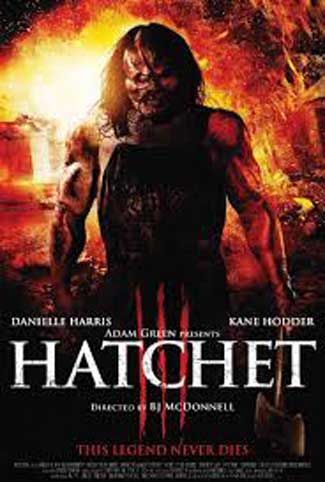 MG: You and “Kane Hodder” (actor) both played the iconic horror monster, Jason Voorhees. Did you exchange “Friday the 13th stories on the set?

DM: Actually no, we have been friends for years. We met at a signing at a convention. You know, its such a surreal experience growing up on those movies and then being “that guy”. Its such a good feeling watching a t.v. Show or movie and thinking about how good it is and then being on it.

MG:Who would win in a fight? Victor Crowley or Jason Voorhees?

MG: you have hilarious twitter page, would you mind sharing your username with fans?

DM: No, please I would love it man! Its funny, I’m known in my career for punching people in the face and breaking bones but my background is improv comedy. I write really funny one liners from time to time that cheer people up. In return it makes me feel good so I just write all the dumb stuff that goes to my head.

MG:have you been to “Halloween Horror Nights”?

DM: Oh my god yea, its great! I go almost every year. One of my first jobs after moving to L.A. Was working for “Universal Studios” in the “Wild Wild west show.” I was there for six years going “oh someday were gonna move forward and act in TV And film. Now that we are doing it we have some friends that still work there and I love it! Its such a cool circle. Also I show up to red carpet premiers and go”wait a second. I got to do interviews and as a reward I get an open bar and like a VIP pass to all the horror rides? Yea, that sounds amazing! That’s fantastic! 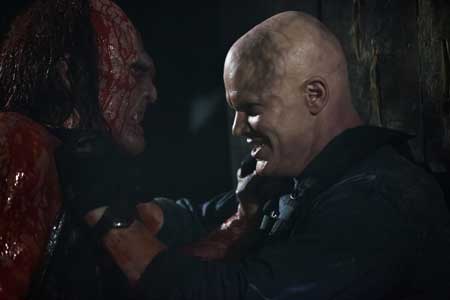 DM: That would be fantastic!Are you kidding me! Throwing in all the kills from all the Hatchet movies would be really cool! I went there for the “Friday the 13” one and it was funny because all the Jason’s were half my size. 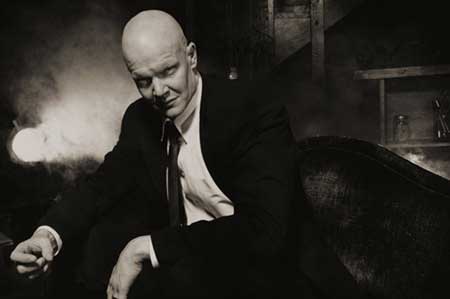 MG: Can you tell us your favorite scene in Hatchet 3?

DM: Any scene that has “Cody Schneider” (actor) in it. That guy is beyond hilarious! Gosh Darnit he has energy. He is like an “Energizer Bunny” of positivity. Its his first film and I think he killed it! It was a pleasure to improvise and act with him.

MG: To fans reading this this, what would you say to encourage them to see this film? 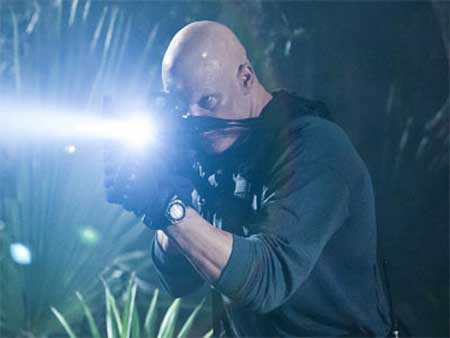 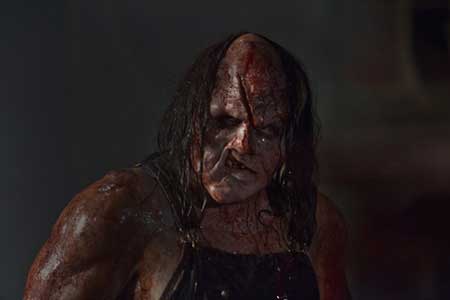 MG: That should be it, the interview was perfect! Thank you Derek

DM: No, it was a blast! I`m honored to be your first interview!

Hatchet 3 is available now on VOD and will be released on DVD and BLUray August 13th.

Thank you for taking the time to read this interview. Of course thank you Derek Mears for your participation! Special thanks to Michael Joy for making this interview happen.