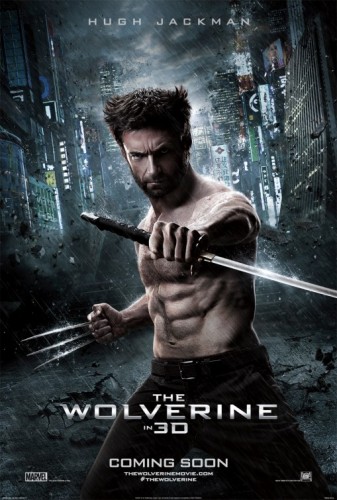 Living in isolation since the death of his beloved Jean Grey, at his own claws, the mutant Logan is plagued by nightmares and self doubt. But Logan cannot hide from the world forever. A young woman named Yukio locates him in the Yukon convincing him to return with her to Japan to say goodbye to a dying friend from long ago. That friend is Master Yashida, a man Logan saved from the bombing of Nagasaki during WWII. He is now the head of a wealthy, influential corporation but now rests on death’s door. Yashida has a gift for Logan, to remove the curse of immortality, to transfer his healing power from Logan to Yashida providing The Wolverine with an opportunity to escape the pain and the grief.

The Wolverine is Hugh Jackman’s sixth appearance as Logan (counting his brilliant cameo in X-Men: First Class), the Canadian mutant superhero with Adamantium claws. And he is set to return again as the character in next year’s X-Men Days of Future Past. It is no surprise that Jackman fully understands the character and it shows with this film based on the Marvel comic mini-series from the 1980’s by Chris Claremont and Frank (300, Sin City) Miller. This is the solo Wolverine movie X-Men Origins: Wolverine intended to be, but failed miserably. This rendition of Logan sans X-Men is helmed by James Mangold with attention to character, design, action and cinematography. Set mostly in Japan, the film is beautiful and exotic with themes of morality, immortality and honor. And it is steeped in the X-Men cinematic universe much like Iron Man 3 is steeped in the Avengers world without relying on its origins too heavily. The Wolverine is a brilliant summer action superhero film where the lead is a hero regardless of his super powers; it’s the man, and his character, who is heroic not the powers he possesses.

Leaving Deadpool, Sabretooth, Gambit and much of the X-Men characters behind, The Wolverine focuses on Logan with only the ghost of Jean Grey appearing to the haunted mutant in his nightmares. The film opens with Logan in the Yukon suffering from the guilt of killing the woman he loves. But fate is not kind enough to leave Logan alone with his pain. Soon, he finds himself in Japan neck deep in trouble, conspiracies and ninjas. Yashida, the man Logan saved during World War II is now set on removing Logan’s healing factor to free the mutant of his immortality and cheat death. Shunning his son, Shingen, in favor of his granddaughter, Mariko, Yashida has unwittingly set a mark on his heir’s head with only Wolverine and Yukio, Mariko’s body guard and best friend, to save her. But, something or someone is siphoning off Wolverine’s healing factor making each wound more painful than ever before. Weakened, but never beaten, Logan must face the Yakuza, the deadly Viper and the imposing Silver Samurai to save the woman who is stealing his heart, Muriko. 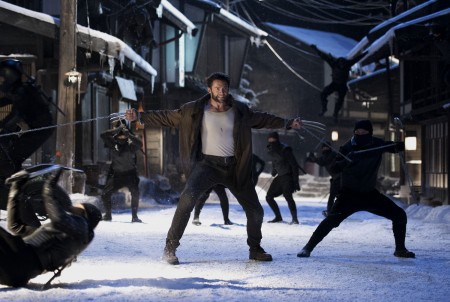 The Wolverine is one of the best adaptations of a direct and specific comic book source to make it to the big screen. Perhaps on par to the accomplishments in The Watchmen and Sin City. It achieves the honor and code that shapes Logan’s character with miraculous ease and high entertainment, full of impressive action sequences and deadly ninja warriors mixed with corporate espionage and political cover-up, along with some romance too, spicing things up. The script, the director and the actor all get Wolverine, that something special that makes Logan tick. They give the audience the man behind the claws. Hugh Jackman is able to deliver, finally, on the hints and promises he’s been afforded with the role so far. The film sets the tone early in the first act when Logan comes across a hulking grizzly bear that has been shot with a poisoned arrow. After sharing a brief glimpse, the bear expresses what the Wolverine must do and, even after begging “Don’t make me do this,” Logan puts the animal out of his misery. The scene is full of emotion, conflict and compassion. It brilliantly sets the tone and themes of the rest of the film and Jackman sells it with ease. It is only the first of such wonderfully realized character scenes in the film.

Director James Mangold handles The Wolverine much like a master craftsman would a classic Western with Logan as the Man with No Name, regardless of its Asian locale. Much like Shane Black did with Iron Man 3, Mangold handles his lead character without ignoring or relying on his history. What has happened before leads to this film, informs this film, but the story is onto itself, unique and wholly satisfying. He also equally tackles the action and the emotion within the film. Especially touching is Logan’s reflections and dreams, nightmares really, with Jean Grey. When he looks down to see his claws red with dripping blood buried in her abdomen, his reaction is incredibly tragic and effective, heartbreaking. His relationship with Yukio as a Robin-like side-kick (She refers to herself as Logan’s bodyguard) is a strength to the film as well. Mangold also delivers on the action with an extended chase scene mid-film that ends with an astonishing battle onto a speeding bullet train. Amazing! Yet, his most impressive touch may be how he portrays Logan’s confusion as he realizes that he is not healing. Using a shaky-cam style combined with a blurring of the images, Mangold visually expresses the inner turmoil Logan is experiencing inviting the audience in on a unique conflict facing the film’s hero. It is brilliant. 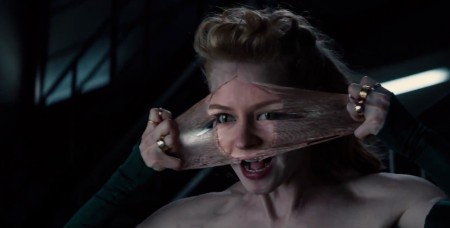 The film is not entirely without its faults. Most notably is the character of Viper and the tonal shift the film takes in its third act. Viper, fetchingly played by Svetlana Khodchenkova, is far too obscure in the plot to make enough sense. She is one of three mutants in the film counting Logan and Yukio. Viper’s powers are loosely defined as is her place in the story; even for those familiar with the character in the comics, the character is still colored far beyond the lines. There seems to be more to her than made it on screen. This makes her a bit too obtuse. And she plays a key role in the third act which has its own problems. The movie ends with Logan facing Viper, Harada and the Silver Samurai in a towering fortress where Muriko is the lure to trap the clawed mutant. The film become heavily reliant on CGI effects and full of the typical overblown superhero film action found in every comic book movie, a strong contrast to the rest of the film. Alone, set aside from the first two acts, the fight is marvelously choreographed and staged, epic in the confrontation between Logan and the massive Silver Samurai.

Along with director James Mangold and star Hugh Jackman, The Wolverine is triumphant success due in large part to its cast. Tao Okamoto as Mariko and Rila Fukushima as Yukio are two strong, independent, resourceful female characters in X-Men movies, in any superhero movie. Hiroyuki Sanada is powerful, if underused, as Shingen, Yashida’s son and Mariko’s father. His conflict and battle with Logan at the end of the second act is the highlight of film. Will Yun Lee is Harada, Muriko’s love interest who is also a member of the Black Ninja Clan teaming up with Viper and the Yakuza to set up his beloved as the head of the Yashida corporation. It is a pleasure to see Famke Janssen reprise her role as Jean Grey even if only in Logan’s dreams. She effortless toys with Jackman and ties the film to its roots, the X-Men franchise. Fantastic locales, great characters, exciting action scenes and gripping struggles makes The Wolverine one of the best hero films of the year and one of the better X-Men films to date.

And, yes, stay to the mid-credits for an amazing stinger that sets up X-Men Days of Future Past with a squeal of excitement from every X-Men fan.